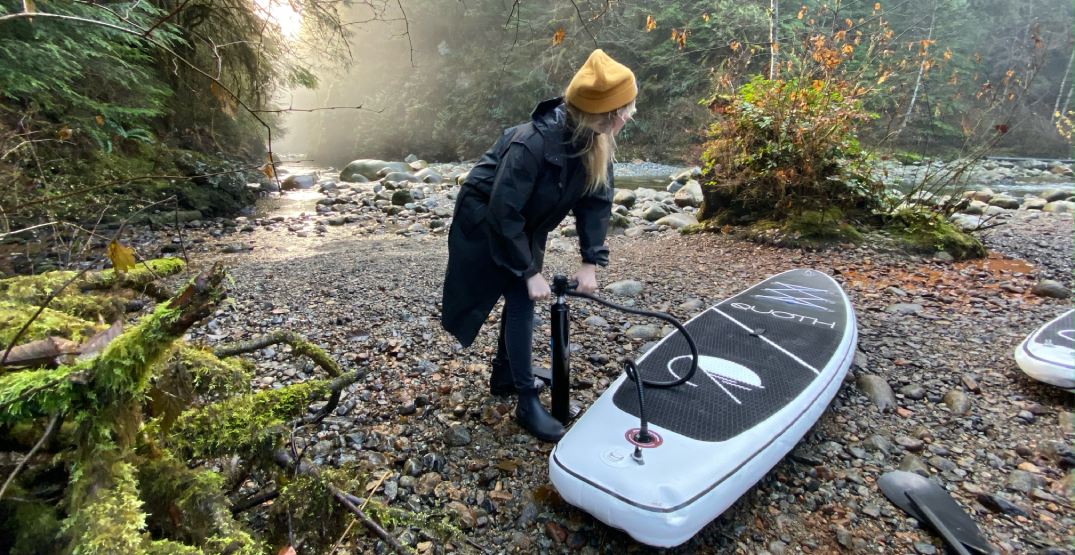 Here in Vancouver, most of us take to the water for some salt therapy at least from time to time. Our proximity to the ocean is one of the best parts of living out west, and one of the best ways to take advantage of the city’s seaside is from a paddle board.

Sacha Hebbert and Mathew Metzner, founders of QUOTH, would agree. That’s what made them start their standup paddleboarding (SUP) company out of East Vancouver only a few years ago when they began doodling designs on a napkin at a ramen house — and eventually filled a gap in the market with quality, street-style paddleboards. 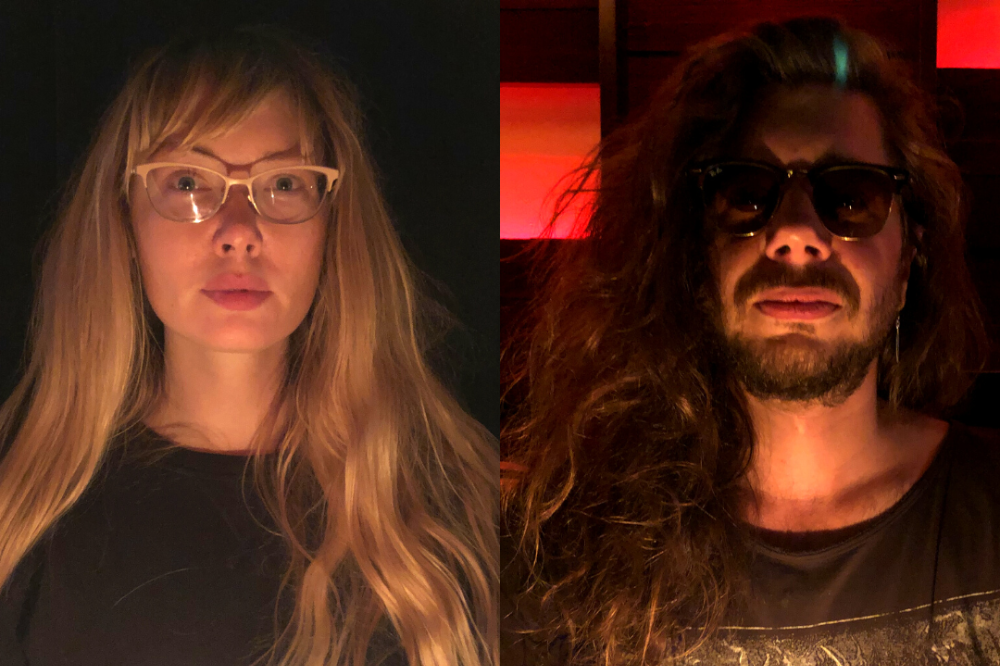 Today, the founding couple is proud of where they started, the success they’ve uncovered in a short amount of time, and what they continue to stand for.

“Coming from Vancouver Island where I used to go surf a lot and moving to the city, getting out on the water is less accessible,” Metzner tells Daily Hive. “So having an ISUP [inflatable SUP] really connected me back to the water and gave me the ability to enjoy a board sport even though it was not surfing.”

“Matthew came from the skate, surf, and snowboarding world, and was highly active in all three,” says Hebbert. “After a little convincing I got Matthew to try paddleboarding with me because I had a sneaky feeling we could do a cool brand together.”

From there, the pair took their unique loves of adventure and the outdoors to create the brand — but knew their boards needed to be different than the other offerings on the market. 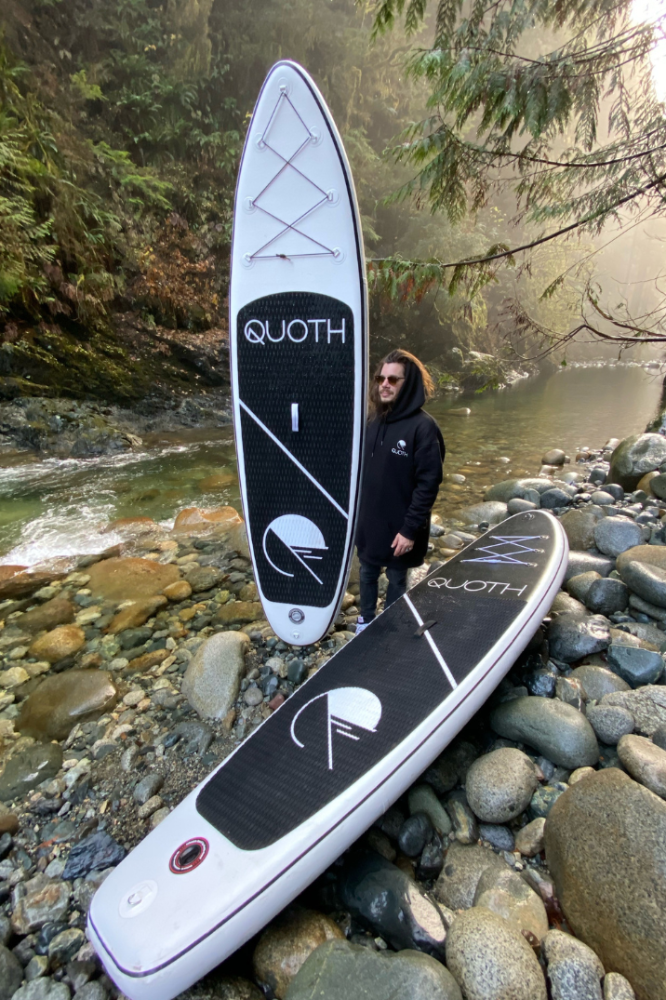 “We decided to make a superior product and charge a price point that doesn’t exclude new riders, and impresses veteran riders,” says the couple. They realized, from years of surfing, skateboarding, and experimenting through various forms of fun, that the marks being missed were shape and style.

“After a year of development and multiple design iterations we came up with a one-of-a-kind design that is truly built for the water,” says Hebbert. “And not just any water,” says Metzner. “We’re talking all water, from ocean surf to choppy lakes to shallow creek beds and rushing rivers. That’s because we designed this board from the ground up.”

And they mean it, as the pair came up with the innovative idea to add a triple-layer vulcanized taping around the edges of the boards, in the same way that Vans sneakers are done. They also added the most extreme, “high-rocker nose out there” to QUOTH’s boards, making them ideal for the ocean’s more rigorous terrain. 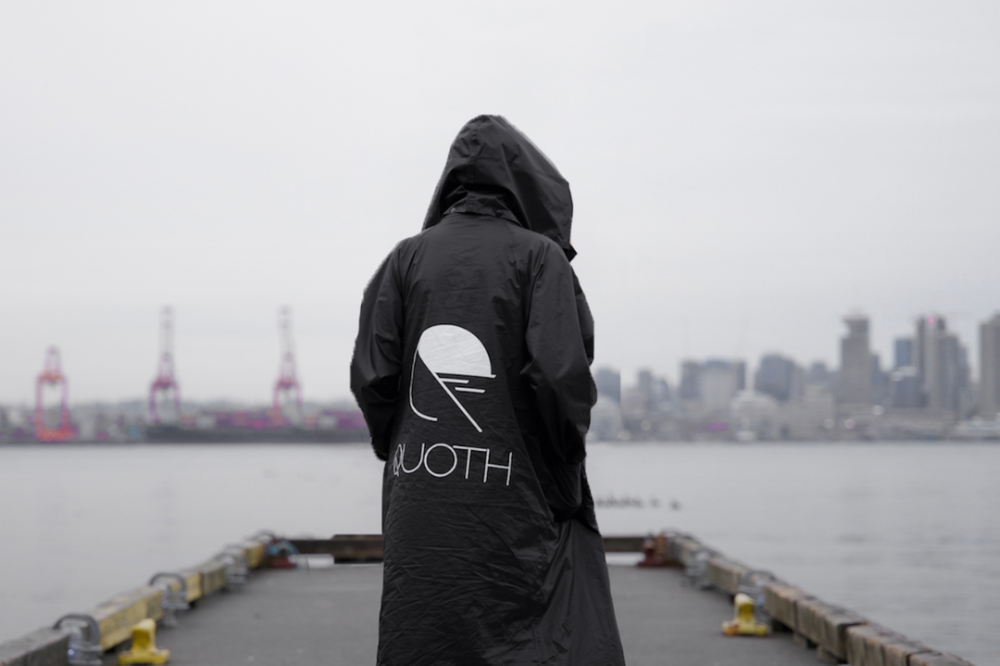 As for style, the mission for QUOTH was to hype up paddleboarding’s cool factor. “From the start, we noticed that paddleboarding wasn’t exactly cool yet,” says Hebbert. “There weren’t any street paddleboard brands out there like other iconic skateboard brands. We saw an opportunity to make this board sport cool, but we would never do it by following the industry status quo.”

So they designed the brand to stand out on their own, according to Hebbert. As opposed to the “flashy, sunny, hot water optics,” she takes her design inspiration from Norse mythology, aligning more with the vibe of the moon over the sun. Even the brand’s name takes inspiration from the mystery-loving poet Edgar Allen Poe.

The same stylistic principles can be seen in the brand’s apparel collection, an all black and white colour scheme offers a clean edge to all of QUOTH’s products, from water toys to hoodies, backpacks, and raincoats. 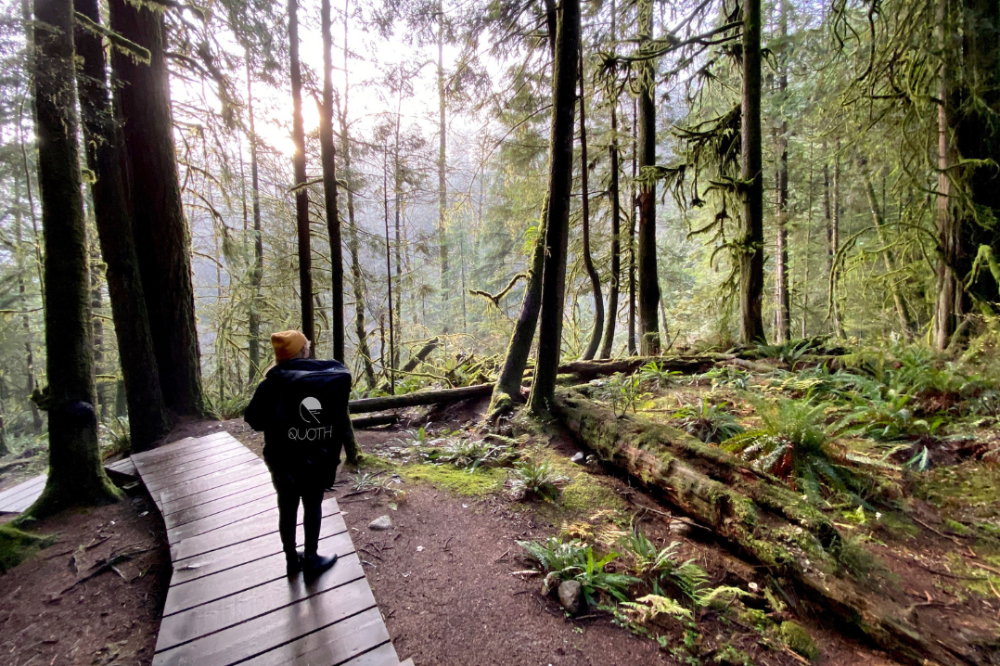 “We are cultivating a new breed of riders that would have normally laughed at the sport,” says Metzner. “We’ve managed to find ourselves in some of the most exclusive core skate shops in Canada that were never interested in buying into the paddleboard industry previously because of tacky brands. Now, with our very street, very core aesthetic, store owners are hyped to sell paddleboards because our particular branding gives the sport credibility with their customer base. ”

“There’s a perception about the West Coast that’s not wrong, we love nature and we create tools to harness it,” says Hebbert. “The fact that our brand comes from the West Coast implies that it comes with a baked-in promise of quality and understanding. It’s essentially because we folks in BC know how to design tools for a rugged lifestyle.”

On its continuous mission of creating a new breed of paddleboarders and bringing a little edge to the sport, QUOTH’s is holding to its ethos. Its all-around authenticity — from design style to quality production to brand ethics, is what has them featured in over 45 retailers across Canada. 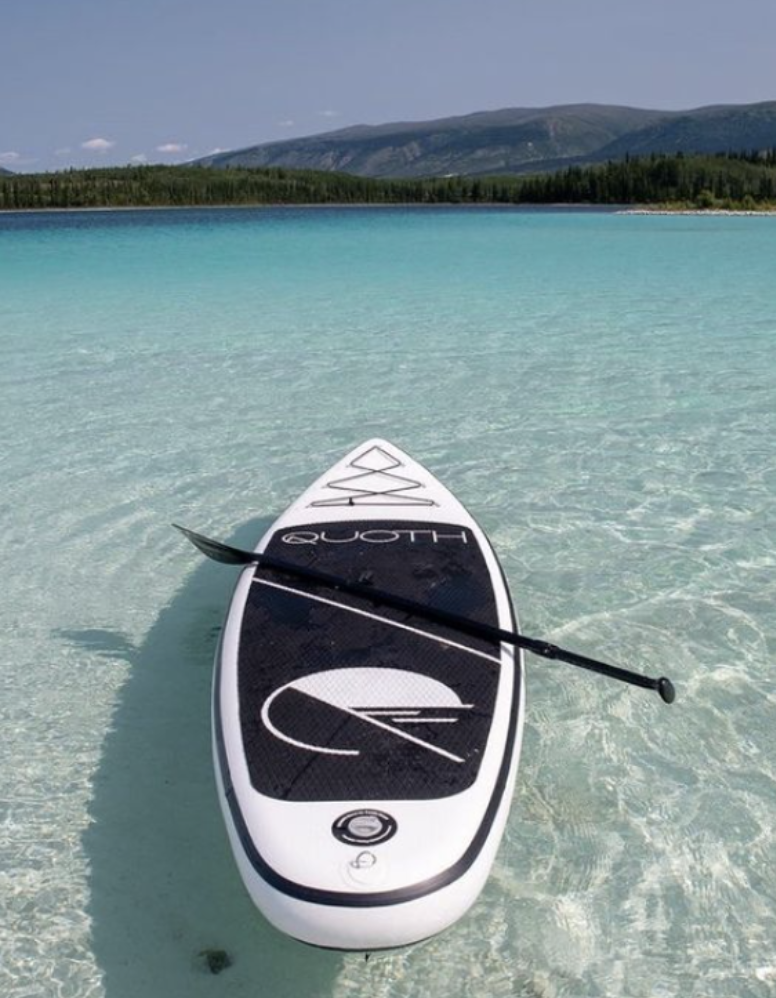 The brand regularly donates a portion of proceeds to SeaLegacy and the Strathcona Community Center to give back in the best ways they can. “Our values are cool too, we openly stand against the objectification of women in advertising and the whole sex sells thing on social media,” says the couple.

“As parents, we’ve seen the devastating impact these tactics have on developing minds. This is why we don’t do bikini shoots on our boards, etc. People can do what they want and advertise the way they want, we just won’t be contributing in that way.”

If you’re about ready to step on a SUP and get boarding, we’re right there with you. Luckily QUOTH is giving away three of their coveted QUOTH boards, valued at $700 each. All you have to do is enter the form below for your chance to win.

To learn more about QUOTH, visit their website at quothlife.com.