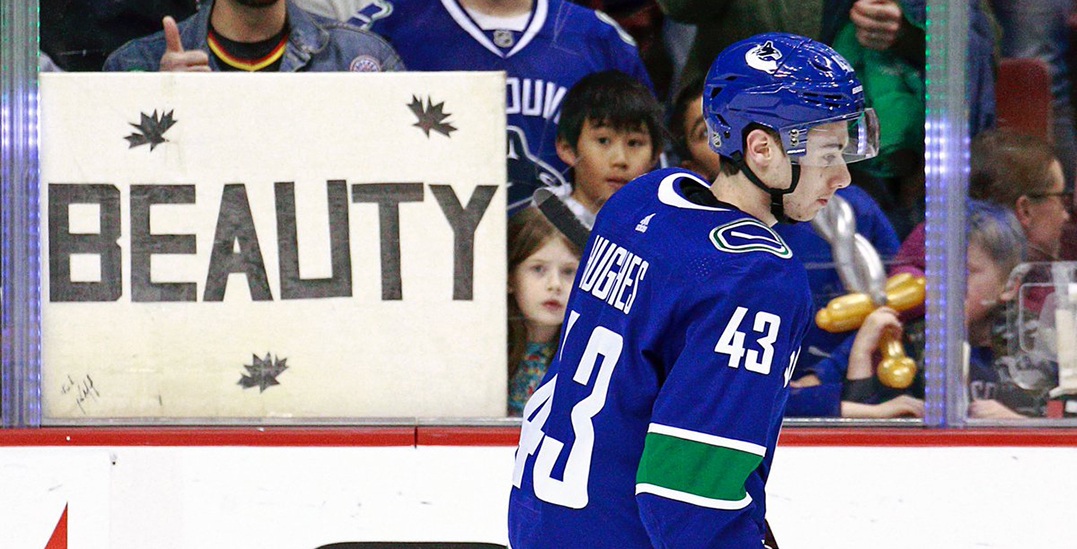 Expectations are high for Quinn Hughes, and so they should be.

The seventh overall pick from the 2018 draft had a solid final campaign with the University of Michigan before joining the Canucks late last season. Even though he played but five games in Vancouver, he pulled off moves seldom seen from a defenceman throughout this team’s 50-year history.

It sets the stage for what could be the best rookie performance seen from a Canucks defenceman in decades. Hughes will enter the season with some believing he’s a 40-point player. Only two Canucks, Dale Tallon (56 points in 1970-71) and Jocelyn Guevremont (51 points in 1971-72) have posted more than 40 points as a rookie defenceman in team history.

As recently as last season, we saw two star rookie rearguards firmly enter the Calder conversation after spectacular campaigns: Rasmus Dahlin of the Buffalo Sabres and Miro Heiskanen of the Dallas Stars.

Here’s a look at how they were deployed during their rookie years, and what the Canucks can learn about it to help Hughes seek similar success.

Dahlin showed signs of being elite

Dahlin is going to be one of the most electrifying defencemen in hockey for years to come. However he was sheltered early on last season, averaging 18:11 in ice time over his first 19 games.

From that point onward, Dahlin averaged 22:03 over the rest of the season. He finished the season fourth in ice time among Sabres defencemen, but his usage over the final 75% of the season suggests only Rasmus Ristolainen played more.

Sabres head coach Phil Housley used Dahlin in a sheltered role throughout the season. Perhaps this wasn’t just because Dahlin wasn’t trusted defensively, but because the Sabres weren’t brimming with offensive superstars and needed a boost.

The Linkoping native’s most common partner throughout the season was Zach Bogosian. The hulking defenceman saw his stats plummet without the young superstar, suggesting he was propped up by the 18-year-old.

After the Sabres acquired Brandon Montour, it was clear that he showed more chemistry alongside Dahlin. However, Housley sheltered that pair even more, as their offensive zone start percentage jumped to 67% (as opposed to 56% with Bogosian).

Together, Montour and Dahlin had a Corsi above 57%, but a low on-ice shooting percentage (4.6%) kept their possession dominance subdued.

Heiskanen thrust into number one role

Perhaps it was his because of his propensity for working with younger players as a college hockey coach, but Dallas Stars head coach Jim Montgomery wasn’t shy about using Miro Heiskanen early and often right out of the gate.

Heiskanen averaged just over 21 minutes of ice time in the month of October. He didn’t look out of place, but he was presented with a huge test after the Stars lost No. 1 defenceman John Klingberg to injury early in the season.

Heiskanen averaged 23:53 in ice time in 18 games without Klingberg, posting five goals and 10 points in the process.

For a good chunk of the season, Heiskanen’s partner was Roman Polak. When with Polak, the rookie Finn was used as a shutdown defenceman. They were relatively successful together but produced little to no offence.

Dahlin and Heiskanen just gave the NHL two of the best performances from rookie defencemen in recent memory. With Hughes poised to do the same, here are some takeaways that the Canucks should consider regarding his deployment

1. Pair him with a puck-mover

Chris Tanev, who Hughes was paired with at times during training camp, could provide the best of both worlds: a puck-moving defenceman who is also steady defensively.

Tyler Myers is another option, though he has been paired with Alex Edler in training camp.

2. Give him ample power play time

Both the Stars and Sabres already had a bona fide power play quarterback on their team. The Canucks, do not.

This is an easy decision. Let Hughes quarterback the power play and have him build chemistry with the first unit.

For the record, Dahlin outscored the Sabres power play quarterback, Ristolainen, with less time on the ice with the man advantage.

3. Shelter him, but not too much

The Canucks probably don’t want Hughes as their matchup guy, just like the Sabres didn’t want Dahlin in that role. However, Montgomery did throw Heiskanen in that role with some success.

Hughes will probably see usage similar to Dahlin, but the Canucks should give him some time against the team’s top players to let him learn how best to handle those situations.

Montgomery wasn’t shy about loading up Heiskanen right off the bat. The Sabres used Dahlin as a third defenceman early, but quickly gave him an increased role after they saw how dominant he could be.

Based on how Green used Pettersson last season, he likely realizes that Hughes has to be a big part of this team if they want to make the playoffs. Hughes did play a career-high 21 minutes in the final game of the regular season. That would be a good floor for average ice time in his rookie season.