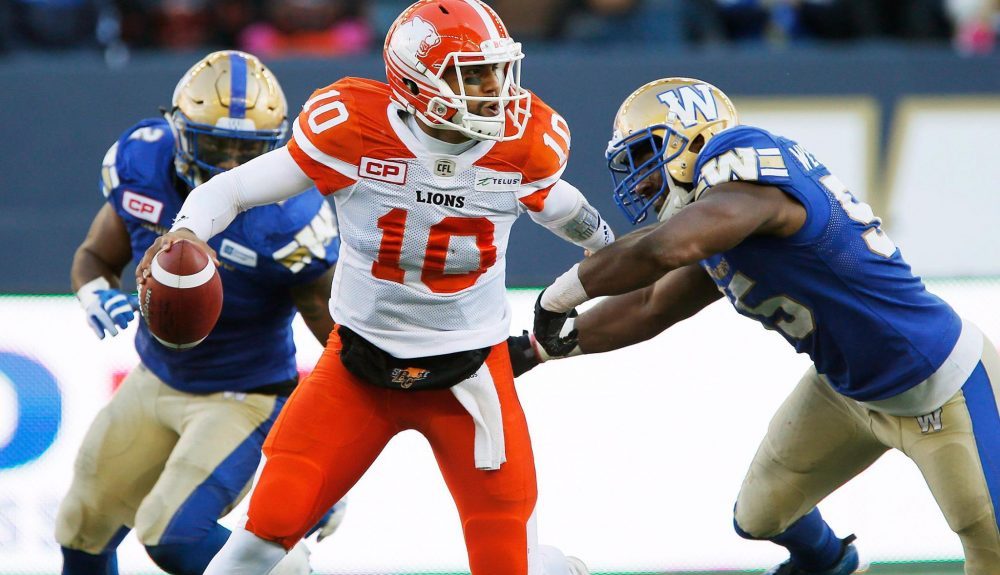 What a game. The BC Lions were one properly-called fumble away from most likely clinching a playoff spot for the 20th consecutive season.

Instead, the Leos fell to Winnipeg 37-35 in a classic thriller. Once down 24-3, the Lions stormed back to take a 30-27 lead in the third quarter, but couldn’t muster out the victory at Investors Group Field.

On the second play of the game, Bombers QB Matt Nichols was intercepted by Adam Bighill, but the turnover was nullified by a pass interference call on defensive back Anthony Gaitor. Winnipeg’s offence went on to put up a 100 play, 95-yard drive resulting in a touchdown.

They continued to move the ball with ease on their next drive, capped off by this beauty of a trick-play.

From a football standpoint, the Lions can’t only blame the refs. Down 37-33 with a 3rd and 1 with under a minute to play, the Lions drew a counter play to Chris Rainey in the backfield, who decided to get greedy and cut all the way to the outside for a possible TD, when he could’ve instead maneuvered back in for the first down.

That, or BC could’ve trusted their offensive line and do a QB sneak or use their running back up the middle like any other team.

Now, to the refs!

With Winnipeg looking to milk the clock and end the game, Jason Arakgi ripped the ball out of Andrew Harris’ hands on a first and 10 run play. There was no question that it was a fumble. You can’t justify not calling it one, especially after a video review of the play.

Instead, Harris was called down on the play?

I’m not even sure why the @CFL has a review centre if they can’t get that call right. #CFLGameDay

From a veteran #CFL player via text: “Perhaps the worst blown call I’ve ever seen… Refs should be subject to fines and (public) review.”

It was Burnham’s finest game of the season, and there’s a ton of them to choose from in 2016. The former Tulsa product has caught virtually everything that’s come his way this year.

Here’s one of his few highlight grabs from today.

.@RealBBurnham has no fear going over the middle as takes a BIG hit, but still comes down with the highlight reel grab! #CFLWired pic.twitter.com/XbO7Y9SR9i

Besides Chris Rainey’s late brain cramp in the final stages of the fourth quarter, the man had over 250+ all-purpose yards, including this display of his remarkable burst of speed.

On 3rd and short, @crainey3 scores the first of two @BCLions touchdowns in the second quarter to make it game! #CFLWired pic.twitter.com/p9yMjunlIw

The ‘Rain Man’ has become must-see TV every week for CFL fans across the nation.

For the second straight week, the Lions front four showed little-to-no pressure on the opposing team’s QB. This evening, the Leos could’t even register a single sack.

In the secondary, backup Anthony Fenner was exposed all night, which forced linebacker Adam Bighill to drop back in coverage and help out more times than defensive coordinate Mark Washington would prefer.

It’s easy to use injuries as an excuse, but every defence is banged up here and there in the CFL. The Lions’ defence hasn’t looked right for the past month, and will need to step it up if they want any shot of going anywhere in the playoffs.

Although he made four of five field goals on the night, Leone missed a 43-yarder in the second quarter that would’ve stopped the bleeding after Winnipeg poured it on.

We’re getting to that point where I expect Leone to be one of the main reasons BC loses a heartbreaker in a crucial game down the road. Besides, who knows how this one would’ve turned out if he went five of five.

It’s Richie Leone time from outside 40….flip a coin.

With that Bombers win over BC, losses by Montreal and Toronto on Monday would clinch a playoff berth for the Lions. BC’s next game is this coming Friday, when this time they host Winnipeg, in what should be an epic rematch at BC Place.