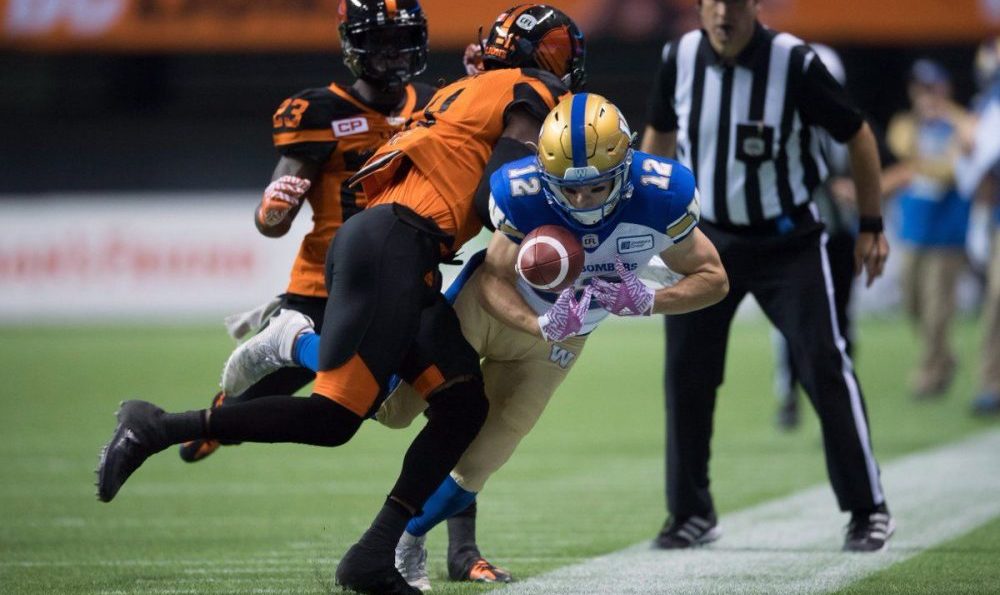 Well, that was an ugly end for the BC Lions, as they choked away a 10-point lead in the final 3:10 of the fourth quarter.

This game featured seven turnovers between both teams in this contest, and was quite ugly from the beginning.

Lions quarterback Jonathon Jennings completed just over 75% of his passes on the night for 327 yards, two touchdowns, and three interceptions. His counterpart Matt Nichols, accounted for 301 yards in the air with a solo touchdown pass and two picks.

Let’s get right into it with the Quick-6.

1. Harris has his way with BC

In his return to the den, running back and former Leo Andrew Harris caught 10 passes from Matt Nichols for 80 yards, and that’s without counting his 70+ yard TD catch and run that was called back due to Weston Dressler jumping offside early in the first quarter.

On the ground, Harris ran for 73 yards on 12 carries, averaging 6.1 yards per handoff.

Jeremiah Johnson on the other hand, had a mediocre night. Johnson finished with 51 yards on 13 carries.

Coming into this game, first year Lions safety Mike Edem had yet to record his first interception, and came out of tonight with two. The former CIS standout also recorded two tackles.

Edem has been a rock in the Lions defensive secondary in 2016. And when he’s not on the field, his replacements have been exposed.

Boy is this guy ever fast.

On Friday, wideout Terrell Sinkfield averaged 32 yards per catch, for a total of 97 yards receiving. Sinkfield was also once again featured in the backfield on an end-around play, gaining 21 yards on the single attempt.

Sinkfield has been a pleasant surprise ever since he was signed to the team. He reminds me of Percy Harvin when the Seattle Seahawks won the Super Bowl back in 2014. Defences have to be alert and always watch out for Sinkfield, who is a huge dynamic matchup threat at all times.

BC’s defensive line had two sacks on the night.

This is a huge deal considering the Leos came into Week 17 with a cold streak when it came to brining down the opposition’s QB behind the line of scrimmage.

Good to see guys like defensive Craig Roh have bounce-back performances in this one.

BC lined up in similar formations from last week but ran completely different plays.

For example, BC used the same formation as when Chris Rainey ran a counter-handoff that didn’t work on a crucial third down in the dying minutes of last week’s loss in Winnipeg.

In the third quarter, BC was faced with a 3rd and 2 on the Winnipeg six-yard line up 19-15. Wally Buono elected to play it safe and settle for three points on a Richie Leone field goal, but really should’ve went for the throat and left the offence out there.

Worst case scenario, Winnipeg forces a turnover on downs and is pinned in their own zone with the ball.

6. How this affects the standings

Winnipeg has now moved atop BC, holding the second spot in the West Division.

If the playoffs started today, BC wouldn’t be hosting a playoff game.

The grind continues next Saturday, when the Lions host yet another huge divisional game at BC Place, taking on the 8-7 Edmonton Eskimos.