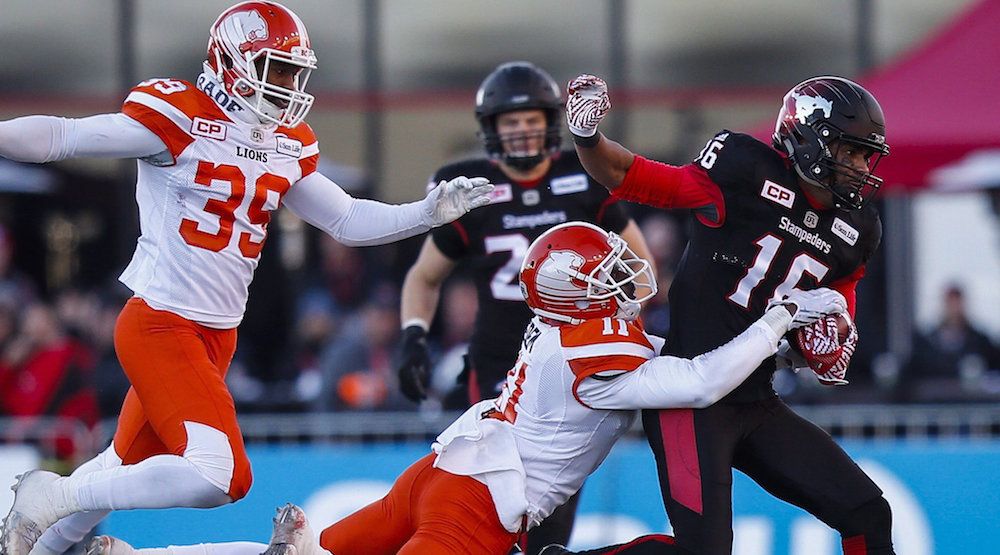 Well, that was ugly.

The BC Lions season came to an end in Calgary, losing big to the Stampeders in the Western Final, 42-15.

BC’s defence couldn’t stop a nosebleed when it came to the Stamps’ offence, giving up 365 yards on the air to Bo Levi Mitchell, and over 100 yards on the ground thanks to a combined effort from Jerome Messam, Roy Finch, and Rob Cote.

Jonathon Jennings was benched for a while after halftime, as Travis Lulay got some looks to see if he could jumpstart the Leos struggling offence, which proved to no avail.

334 net yards is what Calgary accumulated on offence… in the first half. Yeah.

Check out these touchdown passes to wide open receivers.

This wasn’t the first time Jonathon Jennings had been pulled in a playoff game for the backup.

Last year in the Western semi-final, Jennings only lasted two quarters when BC was getting stomped on by, you guessed it, Calgary.

Jennings passed for only 98 yards in the first half, and made this costly throw in the final moments of the second quarter to seal it for the Stamps.

3. McDaniels and Daniels light up the scoresheet

Calgary receivers Marquar McDaniels and DaVaris Daniels absolutely had their way with BC’s secondary in this one.

Both went over the 100-yard receiving plateau, and played a sizeable role in this evening’s onslaught.

On the Lions side of the ball, Terrell Sinkfield Jr. led BC’s wideouts with 86 yards on three receptions.

4. Always think on the bright side

Reminds me of my former house hockey games.

Gotta remember this was a huge bounce back season for the #BCLions after the past two. Team’s on the way up, not today, but next few yrs

100+ yards in penalties in a playoff game.

That is absolutely inexcusable.

Last week, BC shot themselves in the foot with slow play to begin the West semi-final. Today was all about poor preparation and horrible discipline.

In what was a very disappointing end to a 2016 campaign where the Leos finished 12-6 in the regular season, it’s a tough way to go out.

The way BC went out will leave a sour taste in everyone’s mouths, but this was a big step forward for the franchise this season. This is a team that came into the 2016 season with minimal expectations and finished with the second best record in the CFL and made the Western Final.

It's a sad day for us & it's our fault. Off season will be tough but we have things we can build on. We'll rebound & look forward to 2017.

With Jonathon Jennings at quarterback working with a talented receiving corps on offence, along with a Adam Solomon Elimimian, Adam Bighill and a solid defence, the BC Lions have a good foundation to work with. Now it’s up to Wally Buono to make improvements in the offseason so his team can seriously challenge for a Grey Cup next year.