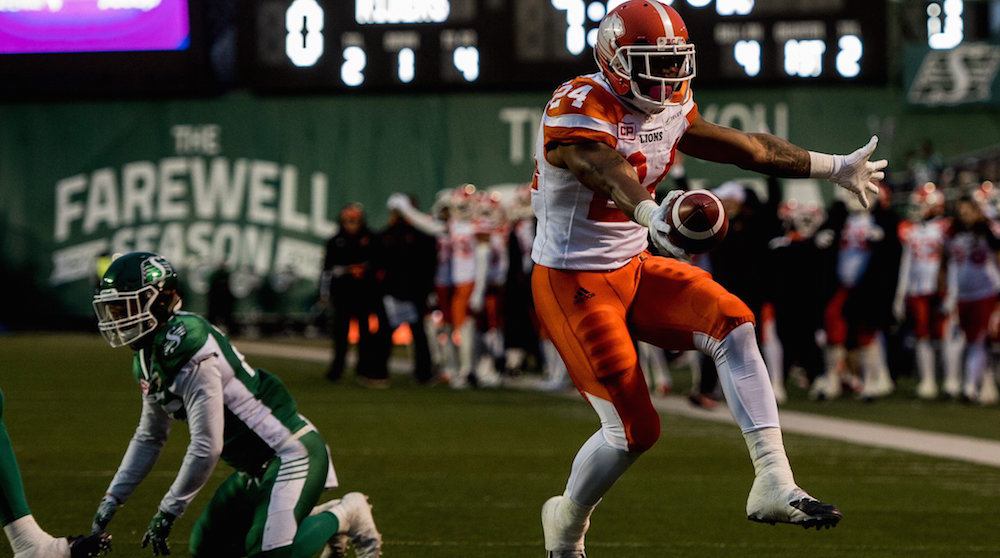 The BC Lions spoiled Saskatchewan’s going away party for Taylor Field on Saturday, defeating the Roughriders in easy fashion.

Prevailing 24-6, Jonathon Jennings threw for 241 yards and two touchdowns on 19/32 passing attempts. Jennings also threw a lone pick on a questionable decision to throw the ball in the 3rd quarter. It didn’t matter, though.

Emmanuel Arceneaux led the way for the second straight week in the Leos receiving core, catching four passes for 68 yards and a beauty of a touchdown.

In the first half, Jennings was delivering the ball to his targets right on the money. A bunch of them were dropped, and that left points off the board.

Jennings could’ve easily had 200+ yards passing at the half.

If BC wants to beat a team like Calgary in the postseason, you need to clean that up.

2. What was Chris Jones thinking?

QB Darian Durant started at the helm for Saskatchewan. On the subsequent drive however, he was replaced by former Kansas State pivot Jake Waters.

I understand that Riders’ head coach Chris Jones wants to take a look at the young quarterback, especially with Durant’s contract expiring after this season, but come on. When you’re switching Durant in and out to start the game, how can you expect the team to win?

This match had a playoff atmosphere to start, and Jones sucked the life out of old Mosaic by making those changes.

This was the farewell of a stadium that had been the Roughriders home for 80 years. The fans deserved to see the two-time CFL all-Star in Durant for the entire duration of the night.

For the second straight week, running back Jeremiah Johnson broke the 100-yard plateau, this time averaging 6.3 yards per carry on 16 handoffs.

During the game, CFL on TSN colour-man Glen Suitor pointed out that if Johnson had the same amount of rushes that Calgary Stampeders’ RB Jerome Messam was given this season, he’d be the league leader in yards on the ground.

It’s clear by now – Johnson is the Lions man in the backfield.

Man the #BCLions front seven is EATING tonight. 7th sack of the game.

Sasky’s offensive line was completely mugged in the trenches through all four quarters. Linebacker Solomon Elimimian led off the day for the BC defence with an easy B-gap sack of Durant.

Elimimian finished with two on the night, while his fellow ‘Team 100’ member Adam Bighill accounted for two of his own as well.

5. Leone can’t hit the broad side of a barn

This is just getting painful to watch on an every week basis.

I understand that Leone is a punter at heart, but man, if you can’t hit a PAT following a touchdown, there’s a serious issue going on.

Leone went 0/4 today. Two were field goal attempts, and the other two were extra point attempts.

Many Lions fans are concerned that Richie will cost the Leos in the postseason. Can’t blame them after another disaster of a performance tonight.

6. What this means for the playoff picture

If the Lions win or tie next Saturday at BC Place against the Riders (who may not even start Durant), BC will clinch a home playoff game.

This would be BC’s first home playoff game since 2012.