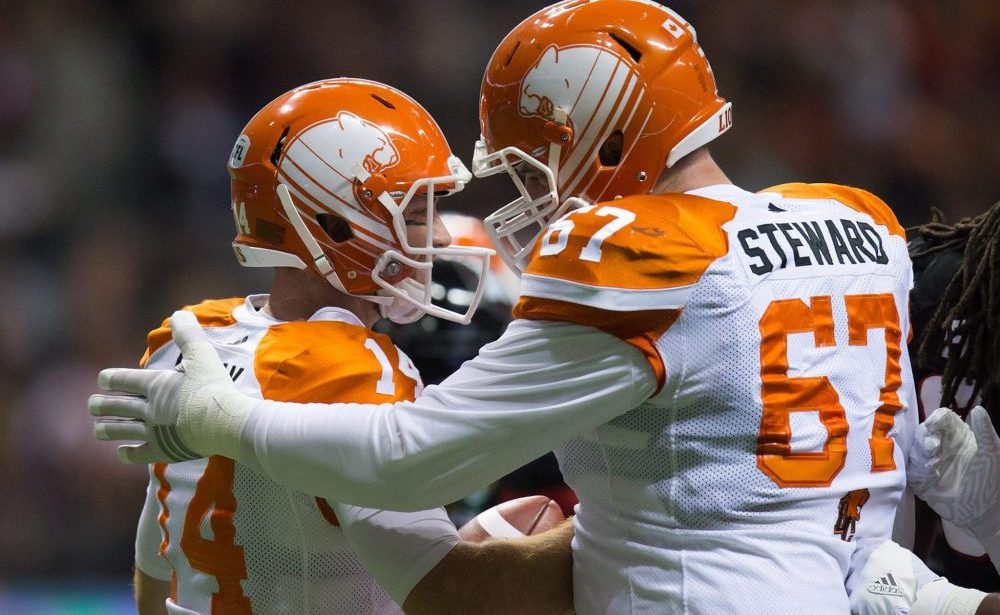 If you attended the BC Lions 40-33 win over the Ottawa RedBlacks last night, you were in for a football treat. This game featured score after score, with a boatload of points being put up on the board.

Trevor Harris continued his rise in the CFL, throwing for 485 yards, two touchdowns, and a lone interception on the night. The pick that he threw was in the dying seconds of the game when Ottawa was backed up inside their own redzone, so I would put an asterisk beside it.

Harris started out the game on fire, picking apart and confusing the Lions defence with play-action schemes. This is the second week in a row now that BC’s D has been lit up by the opposition.

Jennings was perfect on the Leos first drive of the game, tossing a deep 49-yard completion to Manny Arceneaux, and then lobbing a 30-yard touchdown pass to Chris Rainey who ripped the ball away from his defender in the endzone.

Through the first 30 starts of his young CFL career, Jennings has thrown for the most passing yards by anybody in that span.

After only being thrown to once in Week 14, a pass in which he dropped, Terrell Sinkfield’s contributions were shown. Sinkfield caught four balls for 84 yards which included a highlight reel grab in the endzone for a go-ahead touchdown in the early moments of the 4th quarter.

Sinkfield was used a couple times in an end-around scheme as well, running the ball twice for ten yards. Look for the former Northern Iowa products’ speed to be utilized in the backfield more and more going forward, adding just another dimension to the Lions dynamic rushing attack.

The speedy wideout caught 5 passes for 155 from Trevor Harris on Saturday, the majority of the yards coming after the catch.

Here’s one of them, a 67-yard touchdown to the house.

Williams leads the league in touchdowns this season with nine.

Anthony Allen got the start in this one over Jeremiah Johnson and did a fine job on the ground, averaging 6.8 yards per carries on 12 attempts. His longest was a 27-yard scamper.

It will be interesting to see if head coach Wally Buono sticks with his every-second game switch up at the RB position, or if he starts Allen for the second straight week next Saturday in Winnipeg.

Both Allen and Johnson are averaging over five yards per carry this season.

Richie was perfect on his two field goal attempts, but missed two PAT’s in the fourth quarter, both keeping Ottawa within striking distance.

Wally told reporters after the game that Richie needs to figure it out, and boy does he ever. Leone’s punting has been amazing this year, but is far from a sure thing as a placekicker.

To be quite frank, I’m surprised Wally hasn’t gone out and signed a kicker so Leone can focus on punting only. Only time will tell if this decision, or lack there of, affects the Lions when the games get extremely crucial down the line.

Despite another announced attendance of under 20,000, this was probably the best atmosphere at a Lions game this season. Hard to expect considering the Raptors and Warriors were busy reeling in sports fans at Rogers Arena across the street earlier in the day.

Fans were locked in all throughout the contest, and it was refreshing to see a intimate atmosphere for a Lions game.

A 9-4 football team will continue to increase the attendance as the regular season winds down, and the Lions have a strong chance at hosting a home playoff game for the first time since 2012.

Both the winning and entertainment value is here, Vancouver.

This team is for real, and it’s time to buy in.

Just like the offence tonight, we are lightning quick⚡️

The video we’ve all been waiting for …