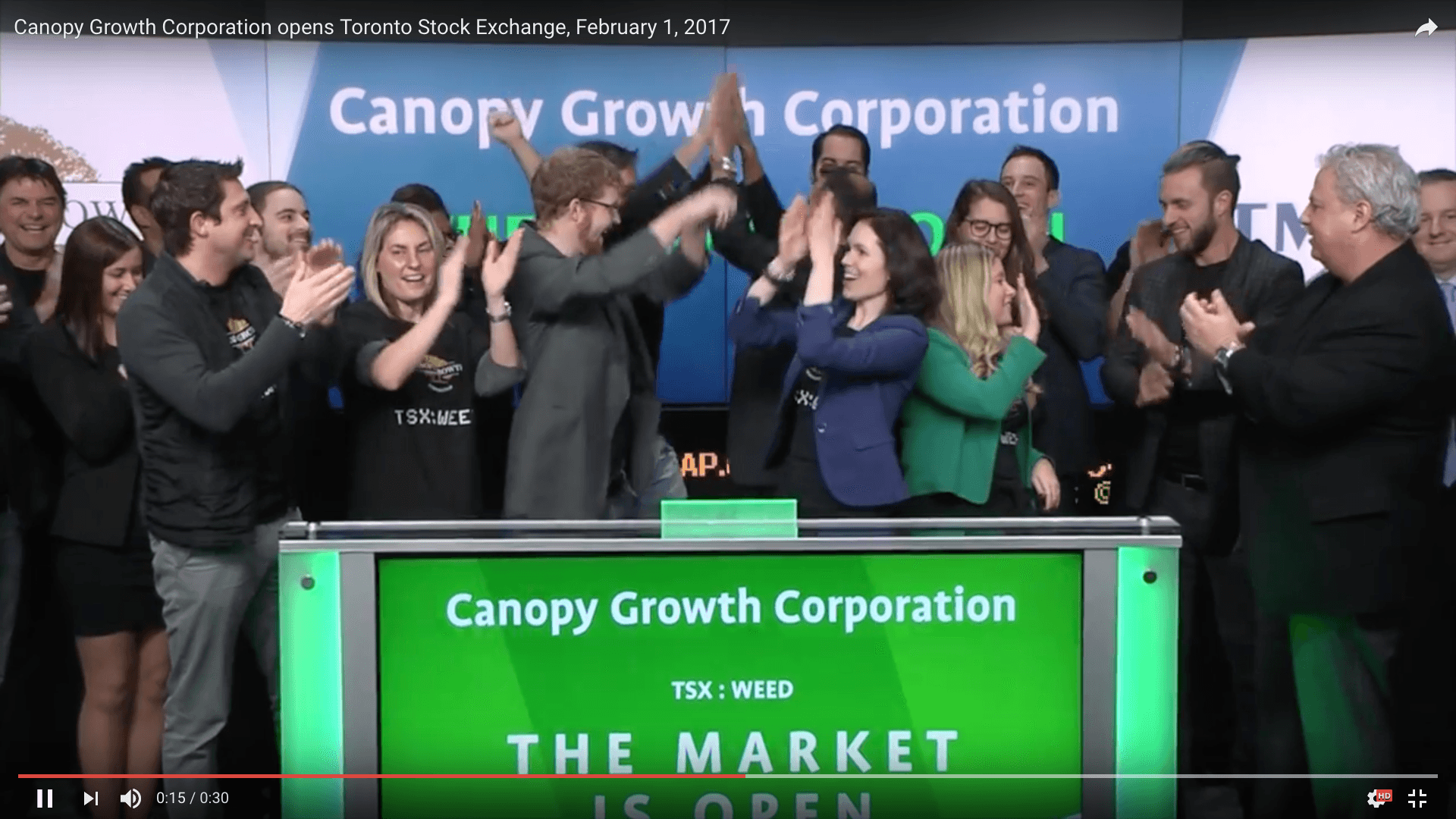 The Queer Arts Festival, showcased TransgressionNow at the Roundhouse Exhibition Hall and Performance Centre,   is a three week festival held in Vancouver. The festival is a chance to celebrate queer art and artists, featuring a curated visual art exhibition. This years’ provocative new live performances were a great success. The Festival continues on to August 9, 2013. Visit www.queerartsfestival.com for festival dates and shows.

“TransgressionNow looks at where Queer artists still transgress social, gender, and political boundaries and what that looks like now” – QAF

A special thank you to belle ancell and robin Toma for their featured images for this post.

Vancity Buzz was invited to the opening night at the Roundhouse Exhibition Hall to view the works of these 14 talented TransgressionNow artists. There were three in particular that we wanted to highlight to our readers – belle ancell, Jonny Sopotiuk and SD Holman. 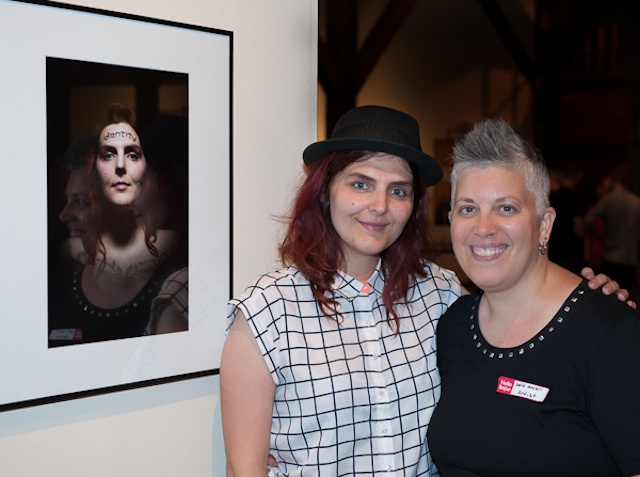 Artist belle ancell (right) with artist Zoée Nuage (left), who is seen in this body of work. Cover image by belle ancell, of artist Amber Dawn.

Tell us belle, what was your thought process behind this body of images, you capture the essence of your subjects so beautifully…

My Primal He{Art} series is from a photo project I was invited to participate in out of Toronto called the 10×10 Photography Project. The Project invites ten photographers to create ten portraits of individuals who have contributed to the LGBTQ arts in their community. Those 100 portraits were shown at a Gallery in Toronto in June and also published in a gorgeous photo book.

I have experienced first hand the vulnerability of sharing one’s art with the world and I felt that having them pose in the nude would help to illustrate that vulnerability. I also love how light and shadow can create texture, form and beauty when photographing the human body.

I endeavored to create an atmosphere of collaboration with my subjects with poses and lighting that would suit their personalities and to some extent their gender expression. I took the duty that the 10×10 Project bestowed upon me very seriously and wanted to honour these individuals and create compelling and beautiful images for them. A lot of folks helped with this Project and I’m very proud of what we have all created together. 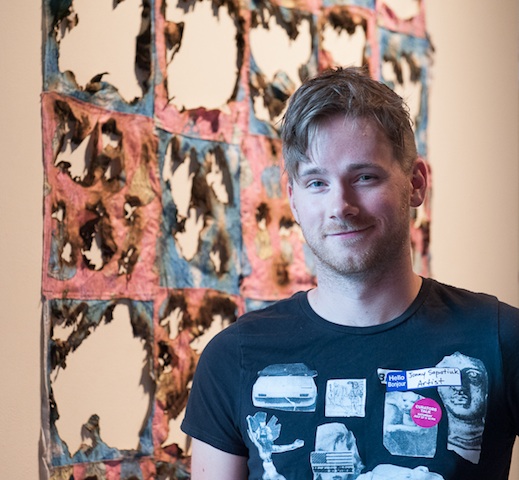 I was very intrigued with this installation of art. At first glance, it seemed to be what was once a patchwork quilt, interchanging pink and blue squares sewn together, then tattered by flames. What lay beneath, were remnants of the his creation, fabric ashes scattered below – a result of  the installation process.

When asked about this his creation de-Construction, Jonny was not sure as to what he would originally create. As he began to sew the alternating squares of Superman (blue) and Disney princesses (pink) together, he discovered that the end of the fabric had a warning label. This material was not intended for Children’s pajamas and was highly flammable. Sparking an interest, Jonny then decided to burn it once completed.

I loved the feeling that I experienced staring into this piece. For me, I felt connected, as though I could feel the lines  of gender blurring before me.  Oddly enough, there were a few princesses’ that were not scathed by the flame. A light skinned princess and a dark skinned princess. This made me think about personal issues of sexual and racial equality. 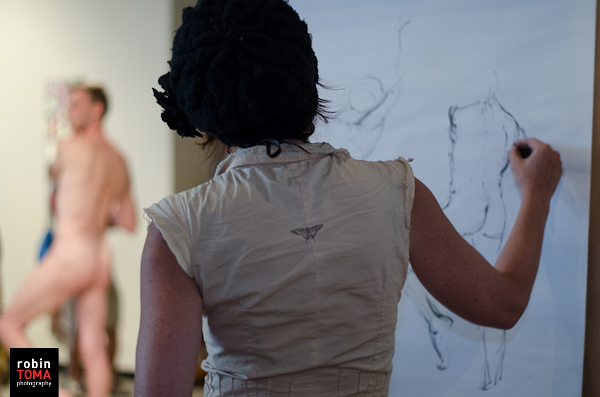 One of the elements that I enjoyed at the opening night celebration was the artist interaction with the nude models, the energy and activity from the artists and their models was truly engaging. The fluid strokes of the artists and the strong athletic poses was inspiring to watch. It is not often that we can appreciate artists crafting their work so openly.

In terms of an event, it was fantastic and well thought out by the curators Glenn Alteen and Paul Wong. It brought the audience into the moment, experiencing the artistic expression with the artists as they sketched the silhouettes silently and with great intent. 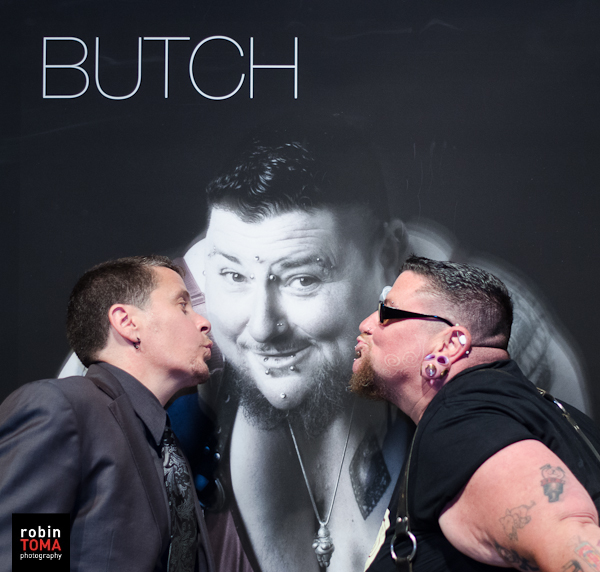 SD Holman, the artistic director for the Queer Arts Festival created a series of photographs that challenge the traditional gender roles in our society. You may recognize this work from a series of Vancouver bus shelters that ran Holman’s images this past April.

Now, with over 100 images in the collection BUTCH: Not Like the Other Girls, the artist has started to create a book of this imagery, capturing the individuality and uniqueness of each model. Models for the series have come from Canada, New York, England and all across the United States of America. It is an honour to be included in this artists body of work spanning over five years.

There were a few images that I was lost in, I was not sure if the model was male or female. I found myself looking for signs to tell me what their gender was, I struggled for a bit thinking and then I realized that this was the beauty in her work. 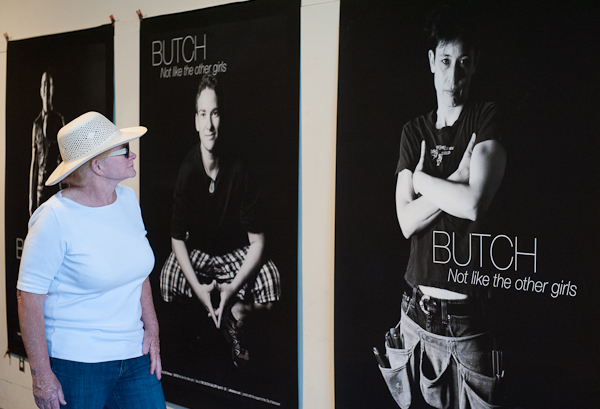 Photo credits: Cover Image, image 2 and image 5 by belle ancell, image 3 and 4 by Robin Toma. Image one by Maya.