Quebec Premier François Legault announced that the province’s death toll from COVID-19 has reached 18 citizens, a spike of ten people since Thursday’s numbers.

Known confirmed cases have increased to 2,021 as of March 27, and cases “under investigation” have spiked to 7,236. In Quebec, 32,335 cases have turned up negative and 29 patients have recovered from the virus.

Canada’s coronavirus death toll has now reached 49. According to the government of Canada’s website, the risk to Canadians is considered high and “risks will vary between and within communities.”

Legault said there are “no plans” to quarantine specific regions in the province and said he is in constant talks with the City of Montreal to assess if it’s time to declare a public health emergency in the city.

According to Santé Quebec, Montreal has the most known cases in the province with 971, followed by the Estrie region at 227, and Montérégie at 193. 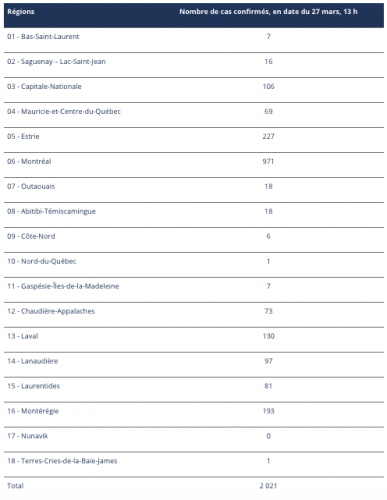