Distracted driving is responsible for a quarter of fatal crashes on B.C. roads according to ICBC.

Every year 81 people are killed in B.C. due to distracted driving, including an average of 27 in the Lower Mainland alone.

Alongside police and the B.C. government, ICBC has recently kicked off a month-long campaign to raise awareness of the dangers involved with distracted driving.

“Distracted driving puts everyone on the road at risk – it’s one of the leading causes of crashes with pedestrians, cyclists and motorcyclists,” said Lindsay Matthews, ICBC’s director responsible for road safety.”

“B.C. drivers know it’s against the law, but far too many still make excuses for their behaviour, and put themselves and others at risk by using their phone while driving,” said Chief Constable Neil Dubord, Chair of the B.C. Association of Chiefs of Police Traffic Safety Committee. “That’s why we’re cracking down on those who cannot police themselves. Even when you’re at a red light or in slow moving traffic – you’re still in control of a vehicle – and the law still applies.”

Throughout March police are ramping up their enforcement of distracted driving across the province. Cell Watch volunteers will also be roadside, reminding drivers to leave their phones alone. ICBC are asking drivers to take a stand against distracted driving by picking up a free decal to display on their vehicles at ICBC driver licensing offices and participating Autoplan broker offices. 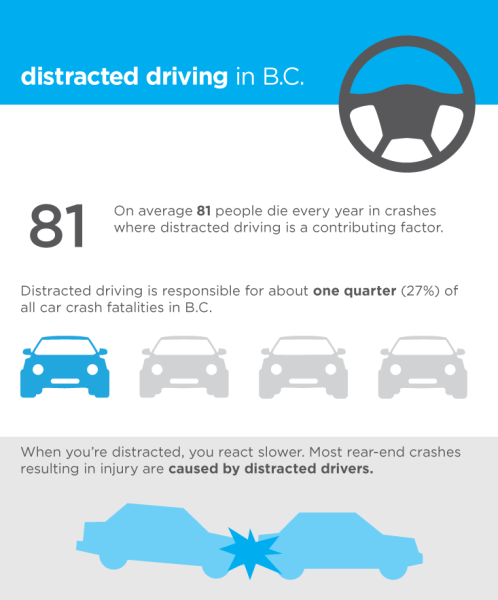