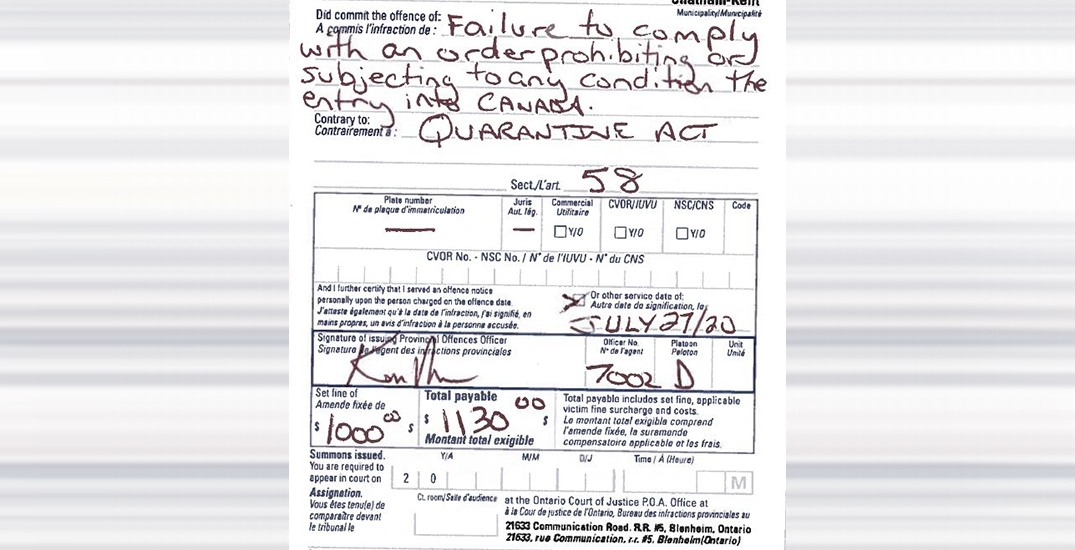 A 41-year-old man has been charged under the Ontario Quarantine Act after failing to comply with the mandatory 14-day self-isolation order.

According to the Chatham-Kent Police Service, officers received information that a local man had recently returned from Florida and was not following the province’s quarantine mandate.

The man allegedly returned to Canada on July 10 and was bound by the Quarantine Act until July 24.

Police say during this time, “the man failed to self-isolate and potentially exposed not only his family and friends, but several members of our community.”

The man was issued a $1,130 fine and charged with failing to comply with an order.

The Act was announced in March by Canada’s Minister of Health, Patty Hajdu.

A Chatham man has been charged with failing to self-isolate for 14-days after returning home from Florida, as per the federal Quarantine Act. Last night, he was issued a $1130 fine. https://t.co/drneX2pWTU pic.twitter.com/6d99LAOqNj

“It is certainly unfortunate and disheartening that anyone would place themselves and more importantly others at risk by not following the simple direction provided to them in respect to self-quarantine,” said Chief Gary Conn.

“In order for us to mitigate this pandemic, a collaborative approach is going to be required by all of us and I would please request that everyone does their part to ensure this occurs.”

The Chatham-Kent Public Health Unit is currently investigating the incident.

Although police say the man potentially exposed members of the community, they have not said whether or not the man has tested positive for COVID-19.