The B.C. government is looking to crack down on pet owners who leave their dogs in hot vehicles.

In a release, they said pet owners can be charged with Animal Cruelty if they leave their dog in a hot car, which faces a maximum fine of $75,000 and two years in jail.

Still, it appears it hasn’t been enough to deter people.

Now the province is working with the BC SPCA, the B.C. College of Veterinarians, UBCM, local governments and police services to increase options for getting distressed dogs out of hot cars.

“The B.C. government expects every pet owner to be responsible, and not risk their dog’s lives by leaving them in hot cars,” said Agriculture Minister Norm Letnick.

“Despite awareness campaigns and Canada’s toughest penalties under the Prevention of Cruelty to Animals Act, we need to do more in situations when pets are needlessly put at risk.”

This summer alone, the BC SPCA has received more than 1,200 calls relating to dogs left in hot vehicles, already higher than the 1,100 calls from 2014 – and summer isn’t over yet, with hot temperatures and sunny skies predicted for most of the week.

Public consultations will take place this summer and fall with any changes expected to be implemented by spring of 2016.

It can take as little as 10 minutes for a dog to overheat in a closed vehicle since they lack sweat glands and can only cool off through panting.

Heatstroke symptoms in dogs include: exaggerated panting (or the sudden stopping of panting), rapid or erratic pulse, salivation, anxious or staring expression, weakness and muscle tremors, lack of coordination, convulsions or vomiting, and collapse.

What to do when your dog has heatstroke symptoms 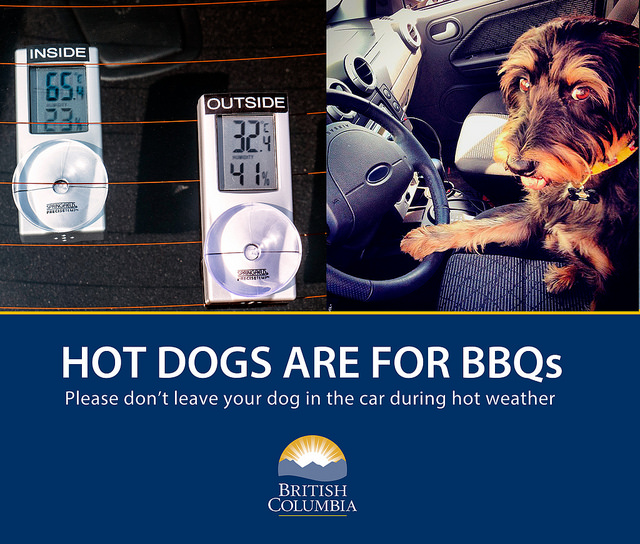