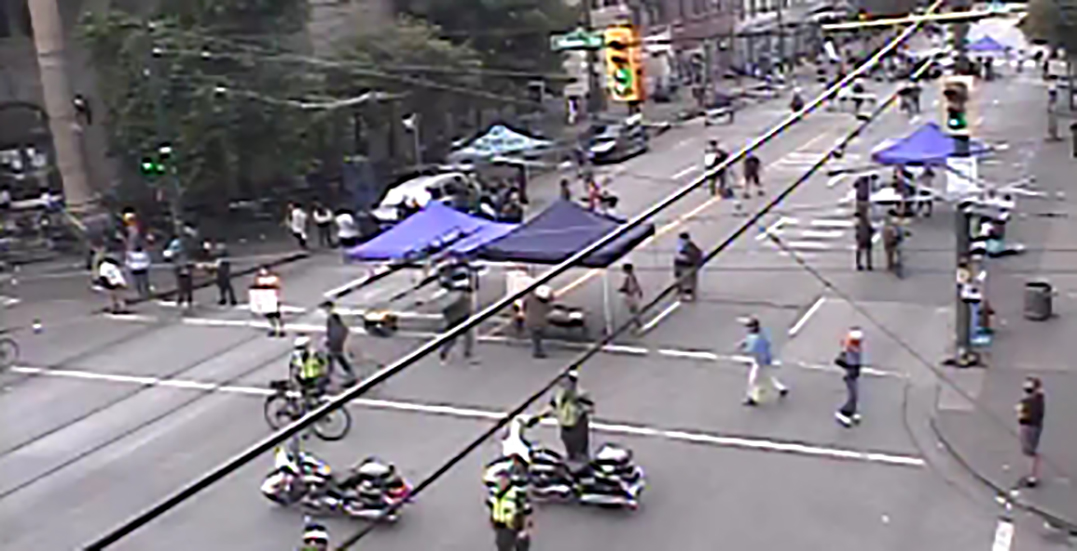 Protesters and activists on Hastings and Main Street for Overdose Awareness Day. (City of Vancouver)

Part of Vancouver’s downtown core is currently being blocked off by protesters to raise awareness on Overdose Awareness Day.

The City of Vancouver’s Traffic Camera is showing several tents and what appears to be Vancouver Police Department (VPD) Traffic Officers set up on the 100 block of East Hastings, between Main Street and Columbia. 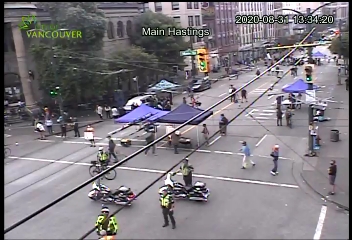 Protesters and activists on Hastings and Main Street for Overdose Awareness Day. (City of Vancouver)

According to the Coalition of Peers Dismantling the Drug War, the event is a “protest and block party” to raise awareness of the ongoing drug crisis.

“International Overdose Awareness Day is an annual day dedicated to raising awareness of overdose deaths,” writes the coalition in an email.

“The past four months in British Columbia have reached unprecedented and grim milestones: 174 people dead in May, 177 dead in June, 175 dead in July from overdose caused by an ever more toxic drug supply due to the coronavirus pandemic.”

In addition to demanding the negation of the Controlled Drugs and Substances Act, the coalition adds that drug testing is available throughout the course of the day.

VPD Sergeant Aaron Roed tells Daily Hive that the intersection “will be closed for a few hours” and says that drivers are asked to plan alternate routes.

“Police will be monitoring the protest today and will be updating any disruptions to traffic and the public through our social media websites,” he says in an email.

Roed adds that there are “plans in place” to deal with any situations that may arise.

The event is scheduled to take place until 7 pm tonight.