Projecting Change Film Festival (PCFF), Western Canada’s only environmental and social issue film festival recently announced its 2011 schedule of events. Heading into its fourth year, the festival takes place over four days (May 26th – 29th at SFU Woodwards Theatre) and unites individuals who are passionate about exploring some of today’s most pressing global issues through thought provoking films and engaging discussions with speakers from around the world.

A film-festival-meets-TED type of event, PCFF kicks off with an Opening Night Gala, co-presented by Eco Fashion Week, on Thursday, May 26th at 7pm which will include a fashion show featuring Jeff Garner’s Prophetik as well as a 30 minute documentary about his eco-fashion line.

The 2011 lineup includes: the Canadian premiere of Women Are Heroes (France/2011). Through the eyes of a French photographer, JR, this extraordinary film explores the lives and courageous stories of women living in impoverished and unsafe neighborhoods around the world. Women Are Heroes invites viewers to travel and discover those women who day by day, each in their own particular way, struggle to make their world a better place.

Urban Roots (USA/2011) is another Canadian premiere film worth an honorable mention. Directed by Detroit-native Mark McInnis, it is a documentary that tells the powerful story of a small group of individuals involved in Detroit’s urban agricultural movement. The film follows the inspiring stories of several agricultural programs, each one designed to address a specific issue. 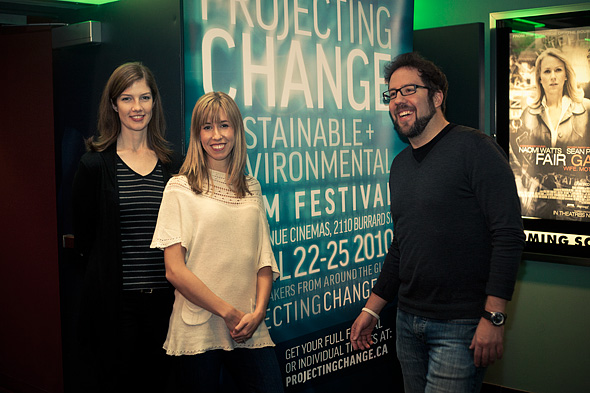 In addition to film screenings and speaker series, PCFF includes Youth Day on Friday May 27th, 2011. Youth Day empowers and educates students from elementary and secondary schools across the lower mainland about issues relevant to their communities. This year, Youth Day is pleased to feature What’s On Your Plate, a witty and provocative documentary produced and directed by award-winning Catherine Gund about kids and food politics. Youth Day will also include The Clean Bin Project, a documentary by Vancouver filmmakers and partners Jen Rustemeyer and Grant Baldwin who challenge each other to a year-long contest to see who can produce the least amount of waste.

“We are proud to offer an exciting lineup of solutions-focused films and inspiring speakers covering a wide range of issues from climate change and food politics to poverty and energy consumption,” says Colette Gunson, Executive Director of PCFF. “We bring a local angle to global issues. with the hope that audience members walk out of the theatre more informed and empowered to make a difference.”
Projecting Change Film Festival takes place at SFU Woodwards, 149 W. Hastings Street in Vancouver from Thursday, May 26 –Sunday, May 29. For more information and a full list of films please visit: www.projectingchange.ca.
Tickets are available for purchase online and at the door. Individual screenings are $12.00. Please inquire for group rates at [email protected]