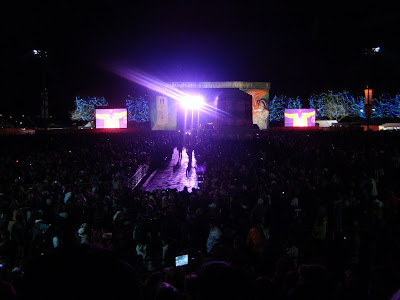 You say protest, we say party!
The thousands that read Vancity Buzz everyday know where we stand on this issue. We’ve talked about it ad nauseum (see our latest links here and here and take the time to look at Mark E. Rich’s comment). In order to combat the negativity of anti-Olympic groups local entrepreneur Jason Dussault  has decided that we need to have a pro Olympic Rally outside the Vancouver Art Gallery at 3pm, this Friday.Vancouverites now is the time to let the protesters know that many of us want the games here! In a peaceful happy go lucky manner of course.
I urge all supporters of the Olympics to go out there and show the world we welcome them and that a few hundred (some allegedly paid protesters) protesters doesn’t constitute the tone of the city, region and Province. It will be difficult seeing though most of us pro Olympics will be at work, but hey if you work downtown the art gallery is probably on a 5 minute walk. So lets do this!

There could be dueling Olympic demonstrations on Friday afternoon, just ahead of the opening ceremonies at BC Place.
While opponents have previously said they will be out to demonstrate against the games, there is now a pro-Olympic rally being planned for three o’clock at the Vancouver Art Gallery.
Organizer Jason Dussault of a local clothing company says it started with a newspaper article about the opponents.

He says a lot of people love Vancouver; they want to come together and show the world what an amazing city we have. [source]

The homeless were here before the games and as sad as this may sound they will be here after the games. It’s time to party and enjoy life with the world. So if you care about Vancouver you too would want it to be shown in its best light. That way we all benefit. Besides over 30,000 people showed up in just Richmond, in what may be the ultimate pro Olympic rally of the all, the torch relay. How many people protesting the games? About 1500, many coming from out of province. So…

So come and party with us and the world! See you all there.