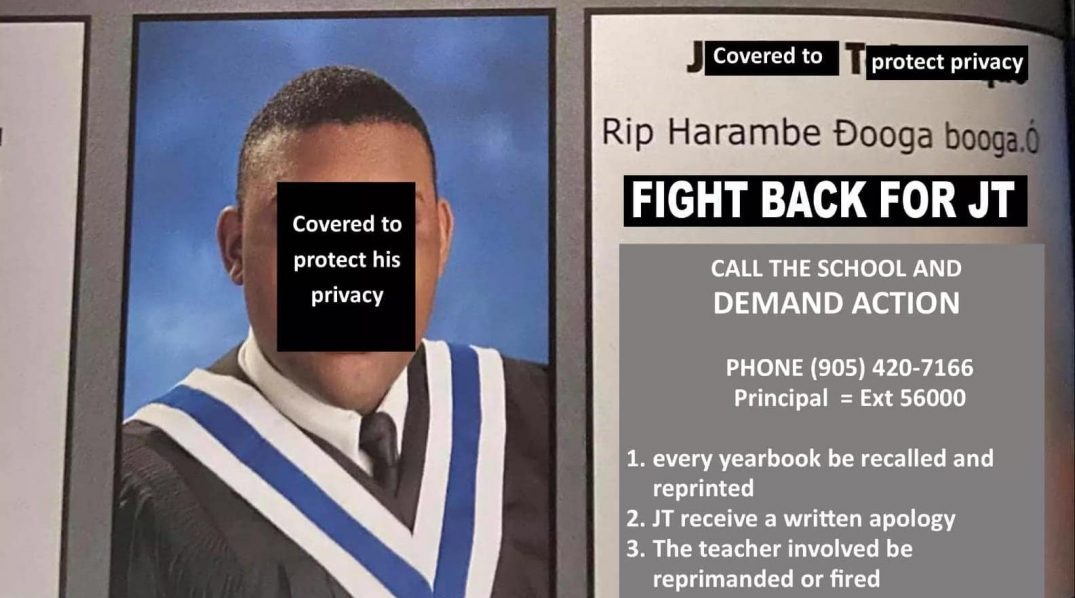 The principal of a Catholic school in Pickering, Ontario, is “horrified” by the racist comments that made the yearbook and is launching a formal investigation into the incident.

On October 10, the aunt of the student at Pickering’s St. Mary Catholic Secondary School took to Facebook to say her nephew submitted his yearbook entry under his name and said, “RIP Grandma. Thank you for guiding me through my four years of high school,” which was omitted and replaced with, “Rip Harambe Dooga booga.O.” — a racist phrase referencing a gorilla that got shot at a Cincinnati zoo.

Mayma Raphael also claimed that in the past her nephew has been called monkey and has been bullied by some kids in the school but that she “never thought that they would have taken it this far.”

“He’s now devastated, embarrassed, hurt, and disappointed. Since this was his final year at the school, he was really looking forward to his yearbook. Now his memory of his time at the school is forever ruined. How can something like this happen? The yearbook committee included a teacher and a few students,” Raphael said.

The principal, Susan Duane, said in a letter to parents on Saturday that “we are horrified to discover that inappropriate comments were unknowingly published in the 2019-2020 edition.”

“These comments were malicious, hurtful and racist in nature. These comments are not a reflection of our mission, vision or values as a Catholic learning environment. We sincerely apologize to the school community for the offensive, hurtful and unacceptable nature of these comments,” she added.

Duane said that a formal investigation has been launched, in collaboration with the Durham Regional Police Services, to ensure that all individuals responsible are held accountable.

All the yearbooks are recalled and all students are required to return them to the office on October 13.

On Tuesday, Durham Catholic District School Board (DCDSB) also released a statement, extending “a direct apology to the Black community.”

“We assure you that this offensive act of misconduct, disrespect and racism is taken seriously. Appropriate disciplinary actions and/or restorative justice, will be enacted in accordance with board and Ministry of Education regulations and the law,” the letter added.

The board said they agreed with the decision to recall the yearbooks.