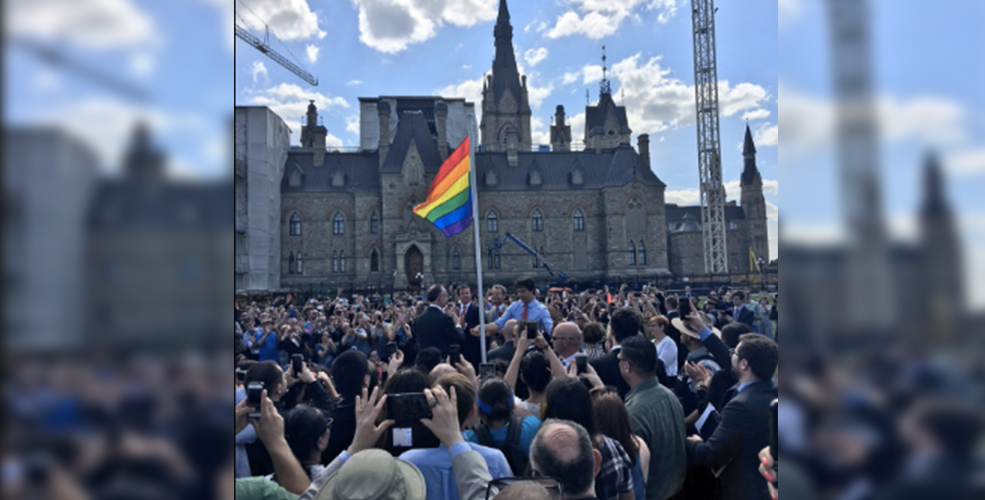 Prime Minister Justin Trudeau made history when he rose the Pride flag on Parliament Hill for the first time on Wednesday afternoon.

Trudeau rose the flag alongside openly gay Liberal MP Randy Boissonnault to celebrate the start of Pride celebrations across Canada.

“That means that every day of the year, no matter who you love or how you identify, that you are valued in our country,” Boissonnault said to the crowd prior to raising the flag.

Proud to stand w/ @JustinTrudeau as we raise the Pride Flag on Parliament Hill for the first time in history. pic.twitter.com/WxaTFqBnuo

He added that this marks the next step in “a long arc of inclusion” that began in 1969 with the decriminalization of homosexuality by then-prime minister Pierre Elliot Trudeau.

“We remember those people who loved and lived in silence, who have fought for the rights of LGBT people and have died for that cause, and today we say that we all belong,” said Boissonnault.

Trudeau said there’s no better way to celebrate Pride than by raising the flag on Parliament Hill for the first time, and mentioned Bill C-16 which seeks to add gender identity and expression to Canada’s Human Rights Act.

“Trans rights are human rights,” said Trudeau. “I am so proud to be here today and I am looking forward to being the first prime minister to attend Pride parades across this country.”

The Pride flag is a symbol of LGBT social movements, with the colours representing the diversity of the community.