On October 15-17, Co. ERASGA and Pichet Klunchun are presenting Unwrapping Culture as part of the Dance Centre’s Global Dance Connections series. The collaborative work hopes to be a lively social commentary through dance and interaction.

As I walked into the theatre to sit in on a rehearsal, I was embraced by moving, flashing, screaming, toys that littered the space. These plastic, mass-produced knick-knacks; “garbage” as Pichet puts it, illuminate the title of the work. Unwrapping Culture serves as a reflection point into both western capitalist consumption and Thai modernization.

Within the blur of plastic dinosaurs and animated watermelons on the stage, Thai sculptures posed a juxtaposition centered on the development of Thai culture. Both traditional and contemporary cultural artifacts clash on the stage to ask the audience Klunchun’s biggest question:“where does culture come from and is culture used to develop?”

Mirroring the deeply symbolic Thai culture, every trinket has a beautifully connected meaning to the political peril Klunchun currently sees in Thailand. Performers and collaborators, Pichet Klunchun and Alvin Erasga Tolentino, have created what Klunchun calls an “interactive performance that represents the diligence and symbolic nature of Thai culture.” From the stuffed animals to the colours of the tiny elastics, everything “presents and represents the system and politics of a culture,” as Erasga explained. 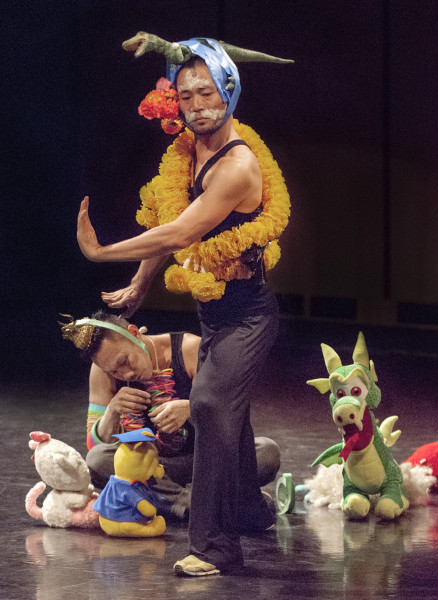 With so many objects vying for my attention on the stage, I didn’t expect myself to focus so intently on one toy; observing how often they toy’s lights flashed, what kind of sound it made, and what pathway it made through the theatre was oddly hypnotizing. This is what Klunchun and Tolentino described as the “obsession with the object” where the object becomes the symbolization of dependence and devotion.

Tolentino and Klunchun used the objects as the core for their movement generation. Transferring the political meaning of the object into a tool for choreography, the movement created from the inspiration of the object results in the construction of an environment that is equally overwhelming and engaging.

I’m eager to see the entirety of the show to experience if the theatre’s transformation is too overwhelming, or just overwhelming enough to spark some critical thought. Part of me feels that the sheer chaos will jump over the the point of reflecting the acceptance of bought, packaged, and commodified cultural artifacts that Thailand (and Canada) has evolved to have. Nonetheless, the balance between order and chaos, past and present, and historical culture with social progression will act as connective through-lines to tie the whole thing up into a neat little package.

Unwrapping Culture plays at the Scotiabank Dance Centre from October 15-17. Check out more information on the show here.