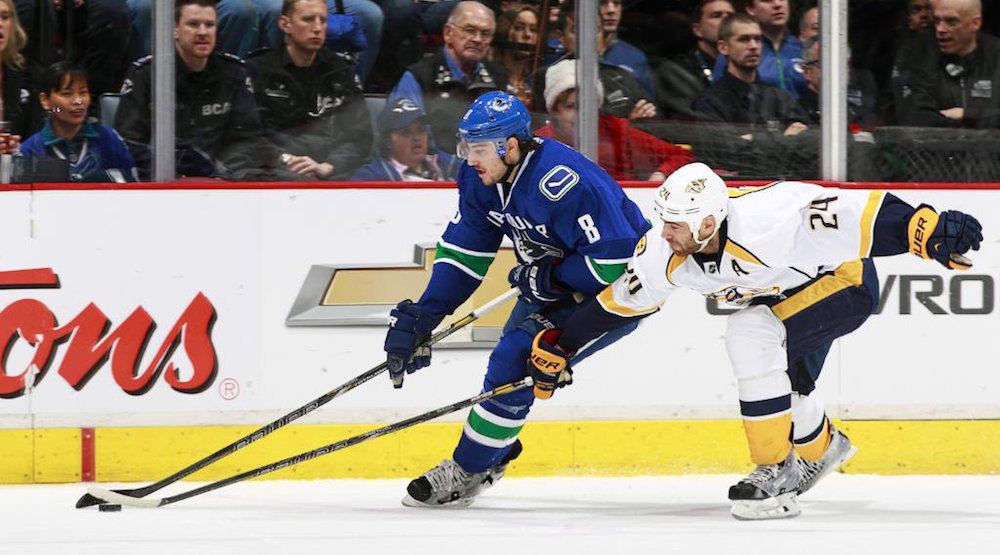 The Vancouver Canucks take on the Nashville Predators for the second time in eight days. You’ll likely recall what happened the last time these two teams met last Tuesday (unless you’ve already blocked it out of your mind): the Canucks gave up a 2-on-0 breakaway while on the power play in overtime and lost the game with 1.5 seconds left in the extra frame.

Vancouver is in the midst of a four-game losing streak, although they’ve picked up points in three of those four games. So is your glass half-full or half-empty?

Aside from the starting goaltender, don’t expect any lineup changes for tonight’s game. Willie’s kinda stubborn that way (more on that below).

The Canucks gave a couple of injury updates, as Anton Rodin is out long-term and Ben Hutton will be lost for 3-6 weeks.

This won’t come as a news flash to anyone who’s been following the team over the past two and a half seasons. Coach Willie Desjardins is notoriously stubborn, whether it comes to putting together lines, player deployment, ice time, or the power play.

In his post-game press conference after Sunday’s night loss to the Devils, Desjardins was adamant that he’ll be sticking with the same first-unit power play personnel (Sedins, Sutter, Baertschi, and Stecher) that has driven the team down to 27th overall in power play efficiency.

“None of those guys are happy with the way it’s going,” Desjardins said. “But they’re our best group …and shuffling it around and mixing it up…that will take three or four games to gel.

“I’m prepared right now to see what they’ll do and I’m not going to change it here for three or four games anyways.”

Although earning two points a game is the goal, Coach is happy with the level of battle he sees across the lines. pic.twitter.com/jcrsDsqlEr

The power play has become as predictable as a Donald Trump press conference. Run it through Henrik on side boards, look for a quick opportunity to cycle with Daniel or a quick deflection or slap pass in the slot. If not there, put it back to Stecher at the point and hope he gets his shot through.

And that’s only if you can gain the zone cleanly.

While Willie is prepared to see what they can do for the next three or four games, many Canucks fans would argue they can’t afford to wait that long.

Look at the Western Conference standings and you’ll see six teams within five points of each other, all battling for the two wild card spots. With the Canucks’ picking up three loser points in their four recent losses, they are still in the thick of the playoff race.

Obviously, this game is huge. With a win, the Canucks would move into a tie with the Kings, one point back of the Flames (pending their result versus the Panthers). A loss puts Nashville up with the Flames and the Kings and puts the Canucks a bit further behind.

So look for the Canucks to win more faceoffs tonight.  After that, all bets are off.

Believe it or not, I’m not talking about the Canucks here. The Predators are without their top two defencemen (PK Subban is close to returning after suffering a suspected herniated disc on December 15 and Roman Josi was placed on IR after a game against Boston last week), as well as forwards Colin Wilson and Miikka Salomaki. Forward James Neal returned to the lineup in Nashville’s last game against Colorado.

In fact, only four Predators players have played in all 43 of their games so far.

So if the Predators have a weakness, it’s on their blue line. However, they have the formidable Finns in net: Pekka Rinne and Juuse Saros. Rinne in particular always seems to play well against the Canucks. Well, at least since the spring of 2011.

Here are some fearless predictions for tonight:

The Canucks will win 3-2 and keep their playoff hopes alive for another day.