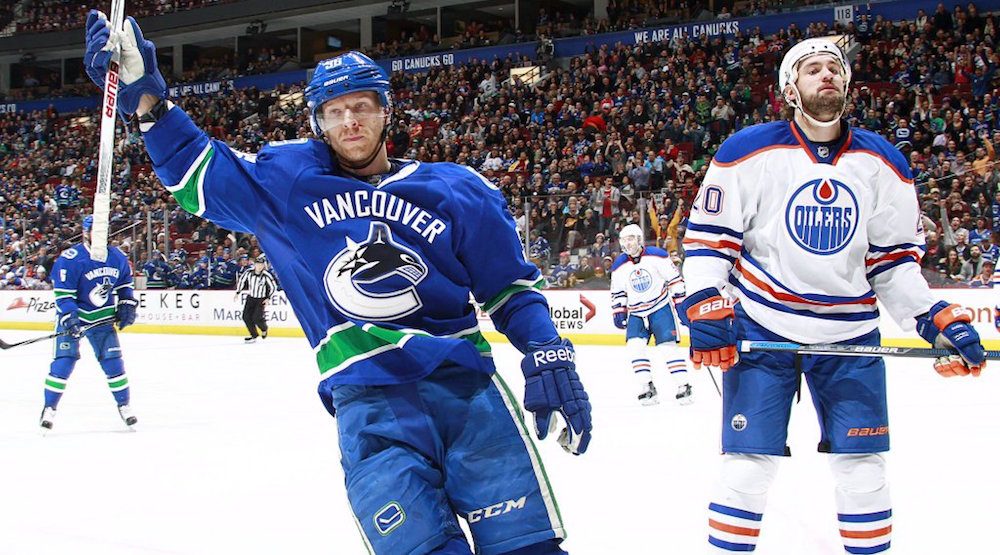 The Canucks look to get back on the winning track tonight as they face the Edmonton Oilers in the first game of a back-to-back home set. It wouldn’t do much good to look ahead to Alex Ovechkin and the Washington Capitals, though. The Oilers are 6-1-0 and appear to have found their groove… finally.

It’s a banged up Canucks squad suiting up to face the Oilers. Burrows and Dorsett skated this morning, but will not play. Neither will Chris Tanev, who is still out with injury, which means Troy Stecher will get another audition.

Forward Mike Zalewski was called up from Utica on Thursday, but will not play.

Ryan Miller starts in goal for a third straight game.

Welcome to the @NHL Stech! pic.twitter.com/7wi2xL0fST

Despite being flung into the fire, Troy Stecher provided very little fodder for his detractors when he made his National Hockey League debut Tuesday evening against the Ottawa Senators. Matched up against the Sens’ top line and defence pairing, Stecher showed well and looks to continue that strong play tonight.

In fact, in 22:35 minutes of ice time, Stecher held a +7 (27/20) Corsi rating. Not bad for a first timer. Slotted next to Alex Edler again tonight, the young defenceman will likely be matched up against Connor McDavid and his linemates, Milan Lucic and Jordan Eberle.

Already missing Derek Dorsett and Alex Burrows (each on injured reserve), the Canucks will have to play on without arguably their most dependable defenceman in Chris Tanev. Seen in a walking boot on Wednesday, Tanev is technically listed as day-to-day.

The holes left by these veteran players do provide the Canuck youngsters, like the aforementioned Stecher, an opportunity on the big stage.

It’s no secret that Connor McDavid is one of the best young talents in a generation. Now, despite being so well documented, he’s still nearly impossible to stop. “McJesus” currently leads the league in points (11) and has the Oilers out to a tremendous 6-1-0 start; good enough for 1st in the Western Conference.

McDavid was named team captain of the Oilers before the season began and, in accepting that honour, became the youngest player to be handed the ‘C’ in league history. A few thought it would be an unnecessary amount of pressure to place on a 19-year old, but based on the response from the young phenom, those predictions were ill-founded.

Watch out for McDavid tonight. When he’s not scoring highlight reel goals like he did in his return to the ice following injury last year, he’s setting up his teammates for tap-ins (see below).

No trouble with the defenseman joining the rush. @drtwofive makes it look easy. #HeritageClassic pic.twitter.com/NRGg1aVTxQ

Okay, it’s obviously going to be pretty tough keeping Connor McDavid off the scoresheet. However, if Super Stecher is going to become a thing (fingers crossed), what better way to get the ball rolling on that nickname?!

Troy Stecher locks down McDavid and the Canucks win a squeaker, 3-2 in overtime.