Whistler Film Festival is running December 3rd to 7th and premiering at it this Friday is Pretend We’re Kissing, a delightful indie comedy about looking for love. It is a film that asks us to rethink our ideas about true love and destiny without being cynical about either concept.

The filmmakers behind the project, writer/director Matt Sadowski and independent producer Peter Harvey, have a lot to say about the work and ideas that went into making the movie. Sadowski describes his inspiration as stemming from his own dating experiences.

Sadowski and Harvey had previously planned on making a short film together and, although the timing didn’t work out, it was the start of a creative relationship. Sadowski brought the script for Pretend We’re Kissing to Harvey about a year later and he loved it. Harvey describes things moving very quickly from there. “I read it and right away I kind of fell in love with the material and knew that I wanted to be on board so I approached him to produce it and we went from there. Telefilm came on board shortly after that and we were in production 8 months later making a movie.”

Our hero in the film is Benny (Dov Tiefenbach), a quirky take on an everyman figure. Sadowski describes his appeal:

“I think that he just really reflects every kind of neurotic thoughts that I think we all have especially when we’re meeting someone new and we’re thinking ‘am I breathing too loud?’, ‘am I chewing my food wrong?’, ‘should I have opened the door, should I have not opened the door?’. That kind of thing. I think because of that he just reflects every kind of anxious moment that we all kind of feel but maybe never articulate.” 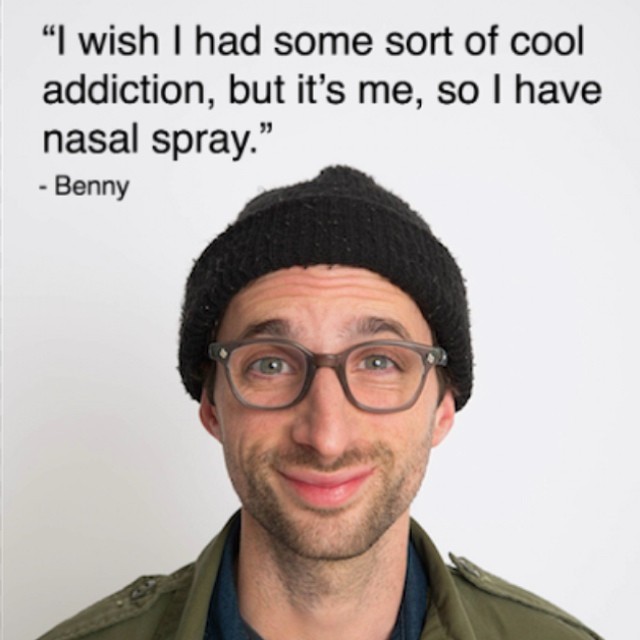 Benny is very much in a shell, but his unambitious attitude is challenged both by his oddball roommate Autumn (Zoё Kravitz) and his adventurous love interest Jordan (Tommie-Amber Pirie). Jordan is ready to take the kind of leap that makes Benny nervous, but that doesn’t mean it’s easy sailing for him after he meets her. Sadowski explains his inspiration for Jordan:

“My idea behind Jordan was to capture this whole idea of the dream in romantic comedies. When I was working on the short film that I couldn’t work with Pete on I was working with an editor and she was single and she was dating a whole lot of guys and she always kind of found something a little wrong with them. I didn’t know any of these guys but they all seemed to be pretty good. She always found something to pick at and I kind of said like ‘Why? Why are you being so critical?’ and she goes ‘It’s because I really want to be with the guy that I thought I was going to end up with in my dreams’. I kind of said ‘I don’t know if those ideals really exist’. I wanted Jordan to have that quality where she’s interested in investigating every possible opportunity but she will always end up being critical of every moment.” 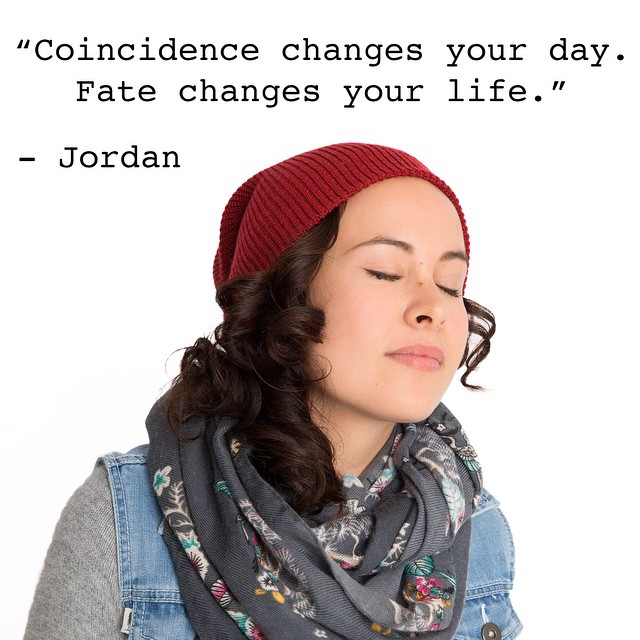 The adventures of Benny and Jordan take place in Toronto, but it is a more bohemian version of the city than we’re used to seeing incorporating both iconic sights and little-known ones as Harvey explains:

“Basically Matt being from and growing up in Toronto wrote this script around a lot of iconic Toronto landscapes, and the great thing about Toronto is it’s stunning. There’s parts of Toronto that even people from Toronto are like ‘Where is that?’. We shot on Toronto island which was pretty spectacular to shoot on, this little hidden gem that’s a short little ferry ride away that a lot of people will never get a chance to go to or never have gone to and it’s a beautiful place to ride your bike and go to the beach and hang out. There’s a great little scene of them missing the ferry. To Benny it’s like the end of the world, but for Jordan’s character it’s just kind of like ‘Well, this is awesome, this is meant to be, we were meant to miss that ferry’ and so it’s just something where a lot of people who have been to Toronto island are like ‘Oh, hopefully we won’t miss that last ferry’. Other locations were just kind of iconic Toronto locations which was awesome to get to show. I think when people watch it in Whistler they’re going to take a different look at Toronto. What they see normally is the CN Tower and all that and it’s a big city and they don’t really get a chance to know that Toronto has different ravines and escapes within the city.” 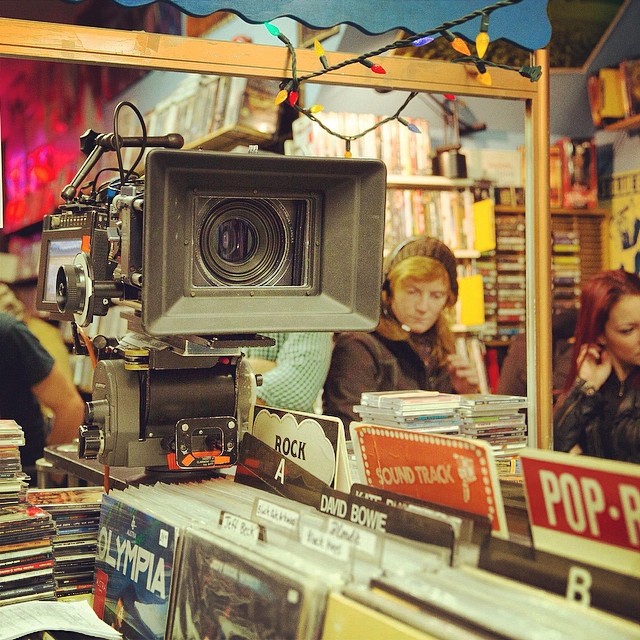 Peter Harvey has been involved with a number of successful indie films, such as Picture Day which won the Borsos Award for Best Canadian Feature at the Whistler Film Festival in 2012. When asked what makes an indie film like Pretend We’re Kissing really different from a studio rom-com he says that it starts with the attitudes of the people involved:

“I think it’s the way that you make indie films. One of my things that I always do when I produce a film, when I hire any crew member even if it’s the lowest person on the totem pole to the highest person I get them to read the script and I tell them ‘I can’t pay you the best salary, I’m going to pay you fairly and you’re still going to get paid, however this is a labour of love so I really want you to read the script and if you love it come on board’. And it’s one of those things where everyone on our crew really believed in the project and loved the script and wanted to see Matt’s dream come true and to make a really great film with us. It’s less about the paycheck and more about the passion of making films. And that’s the reason I moved from the west coast to Toronto was because indie film was happening in Toronto and not so much Vancouver. Vancouver was very much where a lot of LA movies were happening. I started in the industry as a PA and I worked on multimillion – hundreds of million – dollar movies and everyone was there because it was a job and it was like they did it, they showed up, because they were getting paid to. I didn’t get into film for that reason, I got into film because I love telling stories and I want to make movies to my friends.”

Sadowski believes that using this process made a real difference to the final product:

“I just want to give kudos to Pete because I’ve worked on a bunch of films with different budgets and things like that and his technique of getting all the crew to read the script I had never really encountered before. I mean obviously the key people being, you know, the director of photography and the editor and those kinds of people read the scripts but he had everyone from PAs to our gaffers and grips, everyone read the script … He wanted people that wanted to work on it because they envisioned it in their heads that the story was almost as important for them as it was for us. I think that was very cool and that’s what kind of elevates beyond. In Hollywood I don’t think you get that at all. I think people’s experience with films that they work on happens as they’re working on it. They’re like ‘oh, that’s what that scene was about’. They may not even know what the movie was about until they see it. So I think that was very cool and it was a really great technique and I think it shows on screen.”

One thing Sadowski hopes audience’s leave the theatre with is an appreciation for the actors, who they may not recognize despite the fact that they are all very experienced. Zoё Kravitz has had roles in big budget films such as Divergent and X-Men: First Class, but Tommie- Amber Pirie and Dov Tiefenbach’s work has largely been in television guest spots and short films. He also hopes that audiences continue to engage with the themes of the film after it is over. “Personally, I hope they walk away and have discussions with people afterwards and I give hope to people who don’t think that love is going to come their way because they never put themselves out there. Maybe it will inspire others to have a bit more confidence and get out of their heads and put themselves out there.”

Harvey is excited to be premiering the film at the Whistler Film Festival:

“For me I think we’re very blessed be screening for the very first time, to have our world premiere, at the Whistler Film Festival because Whistler and Vancouver have such a large arts culture and community and I think everyone is going to come up and make the trip up to Whistler and check out a cool indie film. I think we’re really blessed… if we opened at a huge festival we might have got lost whereas I think we have a real chance at Whistler to stand out. It’s such an amazing festival because who doesn’t like going skiing or snowboarding and then coming down and checking out two or three movies at the festival. It’s the best of both worlds. I think people are going to get a lot out of our film, but a lot out of the festival as well.”

The world premiere of Pretend We’re Kissing will be at 8:30 on Friday December 5th. 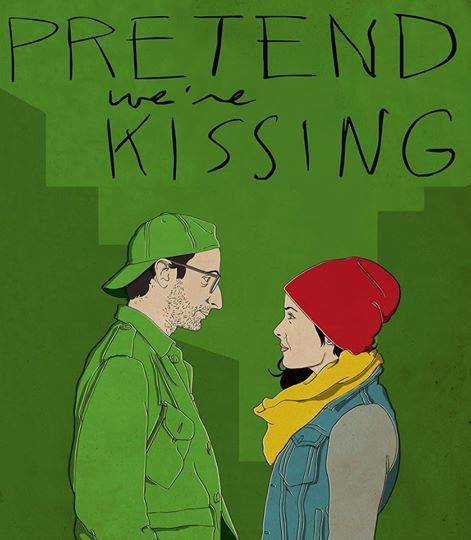