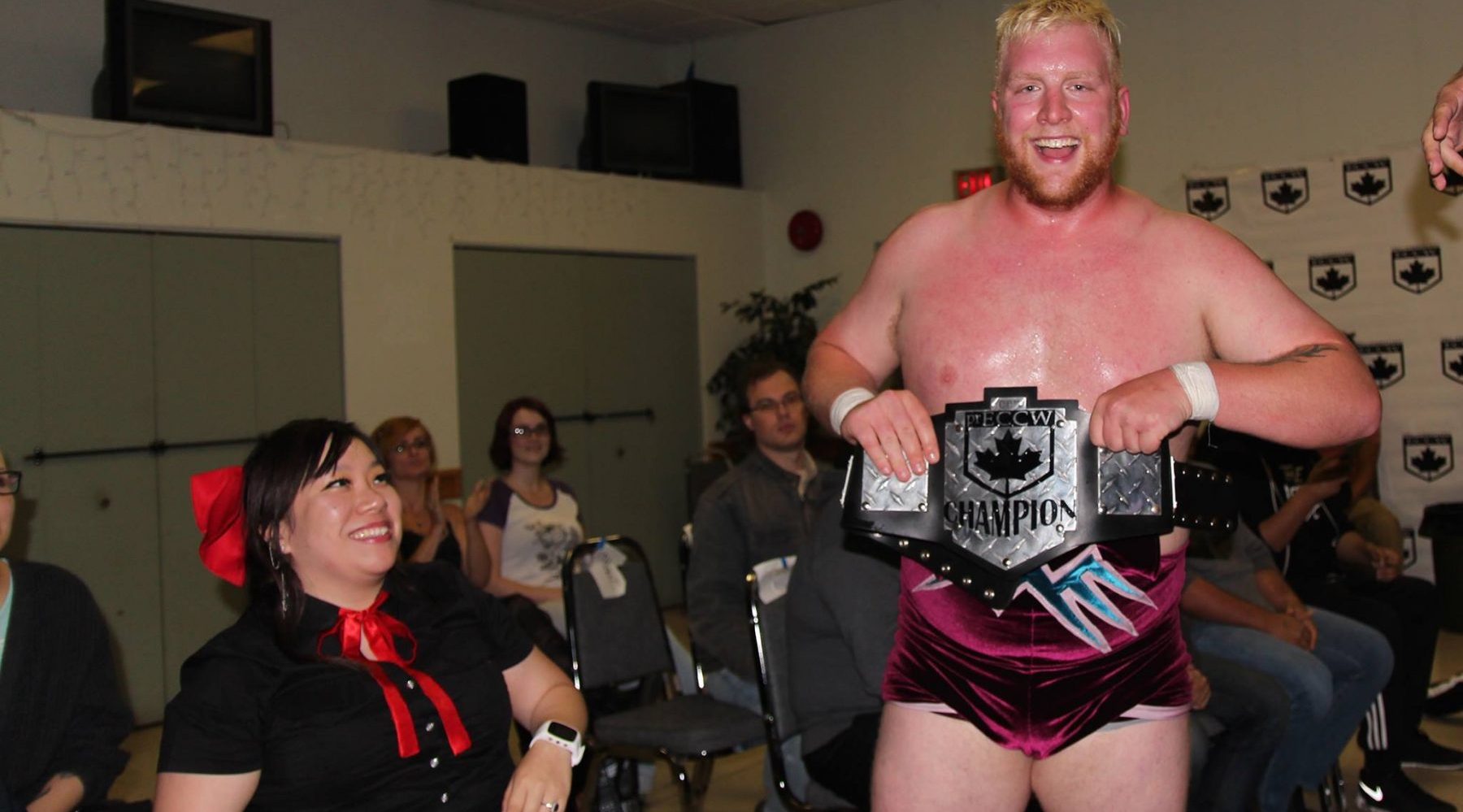 Branded as the NXT of ECCW, prECCW held a show in Port Coquitlam this past Saturday. Since the show is more about letting young guys show their stuff, the story line impact on the regular ECCW shows is very minimal. As a result I won’t really lay into any of ramifications of what happened on this show, I’m just going to do a brief recap and give my quick thoughts. 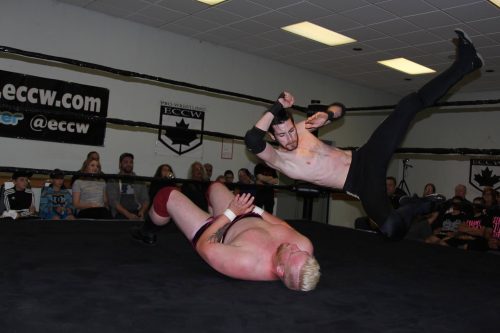 prECCW has been having a tournament to crown the first prECCW champion, so this was the first semi-final match on the night.

I believe King Khash was supposed to be in this match, but Plexis was a late replacement. I assume it was a booking conflict for Khash (or he got caught up writing a defiant motivational post for Facebook), so Plexis stepped up to the plate to take on one half of the ECCW tag team champions the Good Brothers.

Edit: I kid you not, Khash wrote this minutes after I had written this

Id rather live with failure than regret…but then again I'm King Khash, I don't fail!

Side note, Kassidy (Plexis lawyer/advocate/manager/best friend) was the ring announcer on the night, and he did a damn fine job. I’ve said it once and I’ve said it again, Kassidy is the best talker in ECCW, so it was a treat to hear him on the mic.

Now I bring him up only because his client was fighting, and normally you’d think he’d be up to his usual briefcase shenanigans. Except Kassidy said he was so confident in Plexis winning, that he wasn’t even going to stand ringside. See, it’s small things like that (explaining away an inconsistency) that I truly appreciate. I don’t need Christopher Nolan levels of storytelling, but if something odd appears, just give me a token explanation. It helps so much.

As for the match itself, Everest picked up the win in front of a packed crowd in Port Coquitlam. 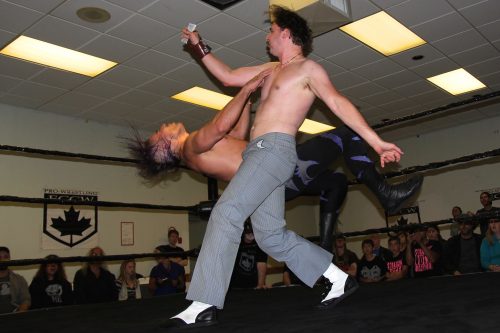 In the other semi-final of the night, Shreddz (former mean spirited Club Bish member turned all around good guy) took on the greasiest grease who ever greased, Kingpin Flynn.

Now, for those who don’t know, Kingpin Flynn is a bowler. He travels with his buddy Lucky Strike Flynn. As per ECCW tradition, I assume they’re brothers. They also have taken up to travelling with The Outlaw Vegas Ricter.

Which at first glance, is super weird. Why are two bowlers a) wrestling and b) travelling with a disgraced ref turned outlaw cowboy? The thing is, it really really works. It’s pro-wrestling zaniness at its zenith, and it’s awesome. Both the bowlers and Outlaw have top notch entrance music too (look for new Music Power Rankings soon).

Anyways, as for the match, Kingpin Flynn picked up the win after cheating his way to victory using a foreign object, setting up a good vs evil final. 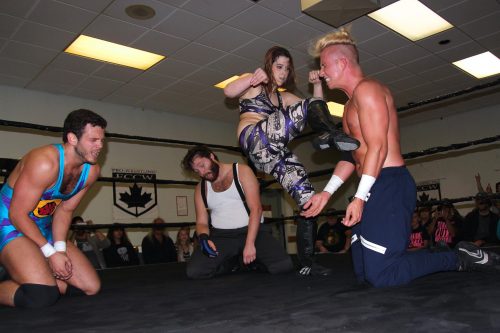 This was your prototypical, watch the veteran ring general lead charge in a match against the greenhorns. Nicole Matthews (who had on some kick ass new pants I’ve never seen before, which almost makes her sweater game irrelevant) was there to basically kick ass and chew gum, except she was all out of gum.

At one point Nicole had all three men down on their knees as she took turns kicking them in the chest. I felt for sure she was kicking Lucky Strike extra hard, because it sounded so vicious. I enjoyed watching Lucky Strike put some force in his offense, by the way, because he’s a bigger guy so it looks really good when he uses that to his advantage. Flying shoulder blocks can look bad ass from a bigger dude.

Regardless, it was a quick, fast paced match, and Nicole picked up the win.

Nick Pesky vs Outlaw Ricter in a strap match 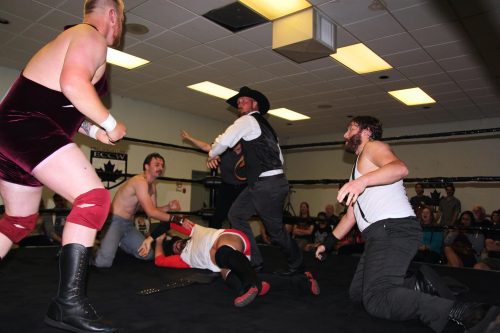 I’ve really enjoyed this feud between Pesky and Ricter. It started when Outlaw made his turn to the dark side (he was a ref at the time, and he cost Pesky a match) which led to these two men trying to basically maim and hurt each other. They fought a couple of times, but the feud is so deep it needed another level of pain, which is how it ended up in a strap match. Pesky was about to get his strap-on. Wait…

Outlaw came out to Wanted: Dead or Alive, which might be the greatest entrance music in ECCW right now dressed up in a full suit, which if you know wrestling, meant something was up. Sure enough, Ricter said he had an injury that wouldn’t allow him to compete, so the match had to be delayed. This angered Pesky, so he confirmed they’d have a future match. Outlaw agreed to a future strapping, and they hugged and continued their night.

Outlaw had his two bowler buddies sneak in, and got off one real good strapping of Pesky before Everest ran in to make the save.

While Pesky was calming down in the ring, Xavier Galaxy showed up, and slimed his way into getting a match out of Pesky. He also started calling Kobra Kai and King Khash (only double KK members allowed) his “Constellation” which is a pretty brilliant name for his stable if we’re being honest.

Xavier is currently one of the strongest guys on the mic, and his in ring work has been getting better and better, and I find myself pretty excited to see what direction his character heads in. Also, I’m a sucker for stables.

As for the match, Xavier and Pesky had a fun match of trash talking (Xavier and Pesky are two of the quicker witted guys in ECCW) and solid wrestling, before Pesky locked in a sick rear naked choke submission finisher for the victory. I am also a sucker for MMA style submissions.

Scotty Mac and Bishop vs the Bollywood Boyz 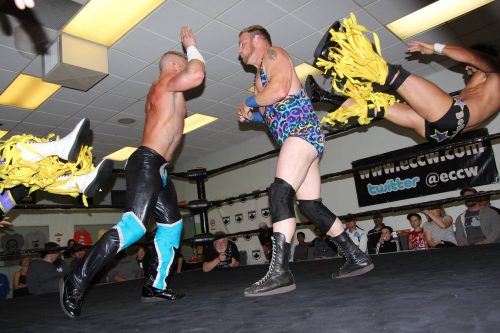 The Bollywood Boyz, who just announced they would be competing in the WWE Cruiserweight Classic , made a rare appearance at prECCW as they took on Smac My Bishop. The Bollywood Boyz are two guys I’d quickly shout out if you asked me “Who could one day make the WWE from ECCW”, so them getting to compete in the tournament and get on the WWE radar is an amazing accomplishment, but not a surprise. You would be hard pressed to find two harder working guys than the Boyz, who are also Canucks fans as well. Two of the only guys in ECCW who actually like hockey, which makes them tops in my books.

Anyhoo, as the Boyz continue their attempts to conquer the wrestling world, they still had to get through two formidable opponents in Bishop and Scotty Mac, two ECCW legends in their own right. Normally, I’d think Smac My Bishop might win this match, but they’ve been having issues as of late. Scotty and Bishop’s career goals haven’t been seeing eye to eye lately, so it was no surprise when the well oiled Bollywood Boyz machine ended up taking the win.

Things fell apart for Scotty and Bishop when the Boyz delivered a super kick, which angered Scotty. That’s his move. So he decided to show the Boyz what a real super kick looks like! Except the Boyz dodged his kick. And he ended up hitting Bishop instead. Then he ate two super kicks of his own, and got pinned for the loss.

You see, Scotty’s life has been falling apart since he lost the ECCW title, and desperation has started to appear. You have to remember, Scotty started off his turn to the dark side because he felt he wasn’t getting the respect he deserved. So he started going into business for himself when he took out Arty Spencer for the ECCW title way back when. That title? That DEMANDS respect. You can try and cut Scotty down all you want, but when he carries that title, it’s a shield against all the “idiots” who don’t bow down to Smaccy.

But then he lost the title to El P. He lost his shield. And he has been deteriorating ever since. Now when people refuse to give him the respect he feels he deserves, he can’t point to the gold around his waist. He’s lost his validation. He doesn’t NEED validation, he is an ECCW legend. Sure it might be cocky when he states he is the reason ECCW even exists, but it’s true, you can’t deny it. That should be enough for Scotty to sleep at night.

But that silver paint, it’s gotten to his head, man. So now he’s turning into Gollum who needs his precious. He needs that belt, just needs it. He’s entered a Battle Royale to get a shot at it again, and lost. He’s been eyeing up that El Phantasmo Open Challenge match like a dieting person gazes upon pizza. So when Bishop got a shot at the title before he did? It made him snap. He doesn’t know who he can trust. His alliances have fallen by the wayside. Scotty has gotten to the point where’s he’s so desperate to maintain his legacy that even the sight of someone doing his move drives him to madness.

In short, I love it. I loved Scotty’s reign as the “respect me” champ, but I might love watching the fall of Scotty Mac even more. It’s such a rich character arc right now. 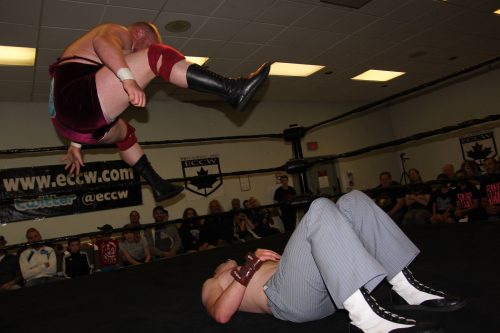 Mike Everest, looking to add to his ever growing belt collection, took on the grease ball bowlers and their cowboy friend in the Finals.

The match showcased the value of friendship, really. On one side you have the bowlers and the Outlaw trying to cheat their way to victory. This was evened out by Pesky and Shreddz on the other side, two men who had both already been spurned by the Bowling Outlaws(?). There was a lot of chaos as each side tried to give their guy the upper hand (or even the playing field in Everest’s case), and they even had Kingpin Flynn try and use his foreign object to gain victory, which is how he won his first match.

Except you know what, you don’t get much by ol’ referee Mitch. He caught Kingpin trying to cheat, and he tossed the weapon away. Devoid of his weapon of fist destruction, Mike Everest managed to fight off the evil tactics of the Outlaw Bowlers (?) and picked up the win, becoming your very first prECCW Champion!

It was my first Poco show, and it was a good sized crowd. It was a fun night, and it went very quickly. Scotty didn’t talk on the mic for eight hours, which surprised me (I kid, I kid), but it was a good mix of vets and rookies. I got to see Lucky Strike wrestle (first time I’ve seen him bust a move in the ring, normally I just see him bust a dance move outside of it), which was a highlight for me. It’s a fun way to see some of the guys you might see on the radar of normal ECCW shows actually wrestle, so I’d highly recommend catching a prECCW show when you can.

As for the finish of the show, I was a bit surprised Everest won, mostly because he’s already so well established in ECCW. I thought it could have been used as great momentum for whatever shenanigans the cowboy and bowlers get up to, guys who don’t have a strong presence in ECCW yet.

That being said, having Mike showcase a single wrestler side of things will be good for prECCW. He’s a bigger guy, so he can have some good matches showing off his one on one power game, and it will be interesting to see where that leads.