After my injury in 2010, I was there for every Canucks game, every practice. I wasn’t allowed in the press box because they didn’t want anyone seeing me. I could watch games from behind the bench. But before the third period, I disappeared.

No one outside the team even knew I’d been there.

Every kid who grows up in B.C. dreams of one day playing for the Vancouver Canucks. Surrey’s Prab Rai nearly achieved that dream. Drafted by the Canucks in 2008, Rai signed a contract with the team in 2010. A top-line point producer in Junior, he looked to be on his way. Then a car accident changed everything.

This is Prab’s story, from his own account. Arranged by Omar Rawji.

My mom and I were driving over the old Port Mann Bridge. I was 20, I had just signed a contract with the Canucks and it was the summer after my draft year.

There was a dip in the road causing gridlocked traffic. We were at a complete stop and a car hit us from behind.

After my accident, I took time off and then I got ready for Canucks training camp. I definitely wasn’t 100%. I was playing in severe pain, but I was getting enough relief to keep going. I just wanted to play. I didn’t want to miss my opportunity.

I played my first pre-season game for the Canucks against the Flames and it was a game I’ll never forget.

It was here in Vancouver, and my entire family was there.

I remember coming to play in Vancouver when I played junior in Seattle – all the Vancouver boys would be trying to find their families in the stands. I knew exactly where mine was because they’d take up a whole section.

The brown section. – there’s my family.

As we were taking warmups, they were all there, standing beside the glass. I had at least 20 people at the game. They ended up sitting behind the home net.

One thing I was really looking forward to was hearing the Canadian anthem. I didn’t get to hear it often because we played in the States. It was amazing – especially the part where the crowd takes over. That gave me chills.

Then the game started. When I play, I don’t really hear the crowd. I know everyone’s there, people are talking and stuff, but I’m in my own world and I tune them out.

I played two exhibition games for the Canucks – one against Calgary, one against San Jose. I was supposed to play against Edmonton too, and my entire mom’s side of the family was going to drive up from their homes in Calgary to watch.

I didn’t get that far, though.

I still remember that home game I played for the Canucks. There were people I never would’ve imagined watching me at the arena. Old coaches, teachers – it was crazy. I walked out after and I was shocked to see people I hadn’t seen in years. I had no idea they were coming.

To this day I see people and they say “I saw you play a couple of games for the Canucks.”

Four days before Vancouver’s season opener I woke up and tried to get out of bed.

I couldn’t. I could hardly even move. My back was locked up and I couldn’t walk.

People ask if I had to deal with racism in hockey. Honestly, I did experience some. I was aware of my situation.

I was usually the only coloured player playing on either team. People got heated and said things in the moment, and outsiders don’t realize how much trash talking there is in hockey, but I never let it get under my skin.

I kept focused. I put my head down and worked hard, like my dad.

I’ve never met anyone who works harder than my dad. He played field hockey for Canada in the 1984 Olympics. I’ve grown up watching him.

His message to me and my brother was, “Find your way. Find what you love and if you want to keep doing it, then keep doing it.”

That’s probably why I kept playing hockey and why I’m running a clothing company now.

My dad doesn’t talk about what he’s going to do, he just goes and does it. That’s kind of where my personality comes from. He would never yell at us because he was an athlete and he understood the mindset.

By the time I got to junior, if I had a bad game, I kept to myself. I didn’t really want to talk to anyone, but he would tell me, “OK, that wasn’t the best game, but you’re playing tomorrow. Don’t worry, you’ll be fine.”

A ghost at the arena 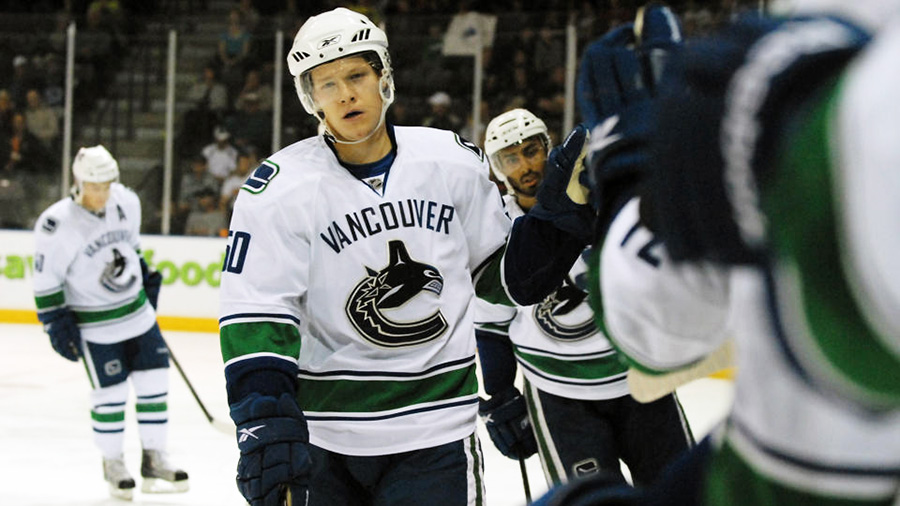 I didn’t have any idea how bad the injury was. As a hockey player, you never want to miss time. You always want to play. When I first had my car accident, I knew I was hurt, but I just kept my eye on the goal – OK, you have to recover.

After my body locked up during training camp, no one could give me a timeline. I thought I’d miss maybe a month.

I didn’t understand it at the time, but back injuries are kind of like concussions – there is no timeline. They couldn’t tell exactly what was wrong because everything was locked up – my muscles were completely contracted. X-rays, MRIs – they couldn’t see anything.

I’m the type of person who says it is what it is – just do what you can do, so everyday I’d go to rehab and focus and stay optimistic.

Being away from the game for that long, it takes a toll on you. That’s when the doubts start entering your mind.

I wasn’t doing any heavy lifting or things you’d think would injure an athlete. I would throw out my back doing the smallest things because my injuries were a lot worse than we thought.

I was at the games doing rehab every day. I’d go in the morning, do rehab, and then I’d be back during the games to do more exercises in the dressing room.

I hardly watched the games. I hated watching.

I had never been out for that long, but after Christmas I started realizing I might not make it back that year.

I ended up missing the entire season.

Part 3 of Prab Rai – Unguarded: life after hockey, will be released on Monday.