It almost seemed too good to be true.

For much of the game, the Canucks, strapped to the vertebrae of Ryan Kesler and Roberto Luongo, were the better team on Friday’s game against the Sharks. They threw big hits, had a number of 2-on-1 rushes on Antti Niemi, and Luongo was by all means excellent.

Despite the positives, the Canucks blew the lead late in the game after Henrik Sedin, who shouldn’t have been on the ice killing off a 6-on-5 advantage (I’m looking at you, coach V), gave up the puck, leading to the Sharks tying it up 2-2 with just under a minute left.

Fans were pissed. I would know, as I was there, and just getting ready to count my quarters for my skytrain home.

Before critiquing the three suspects of the game (those being Alain Vigneault, Alex Edler, and the Sedins), let’s talk about the two best stories of the game.

If there’s any reason that the Canucks were competitive for 99% of the game, it’s this guy. Score a few goals for him, will ya?

He called it a heartbreaking loss, but he was easily the most consistent player tonight for either team. Like the Torres save, when Brent Burns gave him an open net to shoot, but Luongo’s glove said no way Jose. 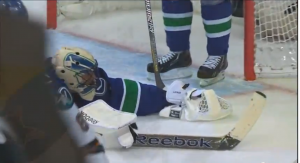 This wasn’t the only spectacular save. Almost every top-six player on the opposing team was given a sure chance at a goal, but #1 stopped them all except for three.

He definitely wasn’t sick tonight, and he gave the team life. Kesler came in straight out of his 2011 performance against Nashville, and went full-on beastmode. He didn’t skimp out on hits either, launching player after player into the glass, or even their benches. Even big Joe Thornton was belted so hard he had a tough time getting up from the ice in the third after a Kesler hit.

After Wednesday’s 3-1 loss, he said that the team would be five times better – we know he was, at least. Playing the point early in the third on a Sedins powerplay, he launched a slapper straight through to the top corner of the net, tying the game at one a piece. 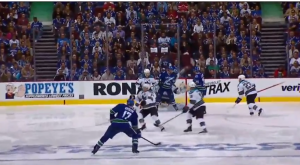 Minutes later, a Dan Boyle giveaway to Kesler in the slot resulted in another slapper, and a 2-1 lead. You could almost smell the raw meat emanating from his breath. 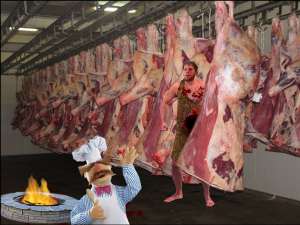 Kesler in the Meat Locker: Photo credit to Wyatt Arndt

The Canucks were then twelve minutes away from a win to split the series, and the crowd was jumping…until a disastrous last minute of play.

How did we lose?

After Jannik Hansen missed an empty net from the red-line (a hard shot to make from half a rink away), the puck stuck itself in the Canucks zone, with the Sedins having the responsibility to clear the puck.

First of all, everyone needs to wonder why Alain Vigneault, the first culprit of the night for the loss, in choosing the Sedin-Burrows line. The Canucks’ top scorers have never been trusted in leading defensive situations when they don’t have to, and are almost always given starts in the offensive zone only. After a shift by the Hansen-Raymond line, the Kesler line as well as Zack Kassian’s line was available for play, and defend leads better with smart break outs.

After this, we can pin some blame on the Sedins. While it might not be their fault they were on the ice, two Art Ross-winners couldn’t look worse in their own zone. Daniel took his chance at blocking shots and passes in the Sharks lanes, but had a hard time getting out. Henrik ended up being responsible for the late tying goal by Marleau, by neglecting to clear the puck. Check out Wyatt Arndt’s breakdown of this play for more sadness here.

The final culprit for tonight’s game, is Alex Edler. Edler was involved in all three goals on Friday night, making all the wrong decisions at all the wrong times. On the first goal, a falling Joe Thornton was gunning for a loose puck that had gone by Edler’s feet – a quick hit on #19 would have kept him out of play, and let Luongo cover the puck easily. Instead, he tried to swipe for the puck, giving Thornton the opportunity to do the same, except into the back of the Canucks net.  On the second, game-tying goal, Edler’s main check was Patrick Marleau, who has a tendency for scoring the clutch goal. On the initial shot, Edler fell down while trying to get in the way, and let Marleau speed past him – from there, #10 was able to see a loose puck behind Luongo, and tucked it in to send the team to OT.  The final goal, which is burned in my memory, had Edler fail to chip the puck along the boards back into play. Instead, the grizzly Brent Burns intercepted, and forced a 2-on-1 on Luongo and Bieksa, where a quick pass to Raffi Torres would seal the Canucks’ fate, and put the series at 2-0 Sharks.

Other than these three issues, the team needs to be stronger on its breakout. At key times, the defense wobbled around in its own zone, gave up pucks, and wasted valuable time. For the next two games, the team needs to improve on getting the puck past its own blueline, and keeping it there.

Today the team flies to San Jose and looks back on the loss. Two games down, the Canucks have never recovered from such a deficit in the playoffs. In their hands hold the exception to this rule, but how can they change their luck?

Again, there needs to be more scoring. The top line has to cycle better as it did in the Kesler powerplay goal, and take more shots. Ryan Kesler can’t be asked to keep carrying this team and also bring home some wins. Beyond the rambunctious centre, there is no other reliable source of goals on this team. Raymond and Higgins are lacking in their offensive performance that they boasted mid-season, and Derek Roy hasn’t been much of a difference maker as of late either. Alex Burrows has yet to make an impact despite being the teams top scorer in the regular season, and the defense has failed in scoring from the point so far – Jason Garrison should give a call to Sami Salo, and ask how to grow some cajones and take more shots through traffic.

The Canucks face a lot of pressure going into the Shark Tank on Sunday, where the Sharks have yet to give up more than two games in regulation this whole season. Giving a team momentum on the road, coming home, also doesn’t help.

As it stands, the Canucks have been playing solid entertaining hockey, and were only a couple of blunders away from a win. Obviously there is great room for improvement, but the notion that the Canucks are in deep trouble is a bit far-fetched.

Stay tuned for our pre-game report for Game 3 in San Jose for more commentary on what the Canucks can do to change the pace of this series, that is quickly going the other way.

Vyas Saran is the Canucks Columnist for Vancity Buzz. Follow him for more commentary and hockey news via @vyassaran.