While most Canadians say they have confidence in their local police forces, those numbers drop when it comes to visible minorities, according to a new poll from the Angus Reid Institute. 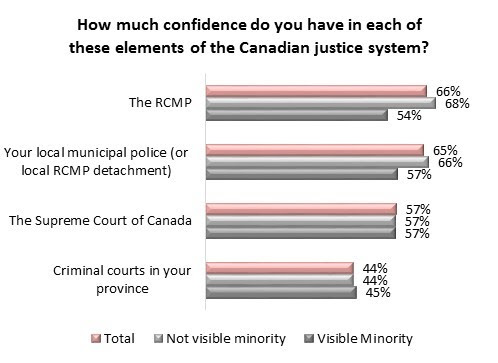 However, Canadians overall – visible minorities included – seem to have more confidence in their local police detachments than people south of the border. A Gallup poll shows just 56% of all people in the United States have confidence in the police, compared to 67% of Canadians.

The Gallup poll was released in June prior to the deaths of Philando Castile and Alton Sterling, two American black men shot and killed by police earlier this month.

When it comes to the justice system as a whole, Canadians have the least confidence in provincial criminal courts, with just 44% saying they’re confident in that aspect. Still, that number has increased from a low of 19% in 2012.

BC has the lowest opinion of all aspects of the justice system compared to the rest of Canada. Only 54% of BC residents say they’re confident in the RCMP – no other province is below 60%.