While walking down Granville Street early Friday morning, you may have been shocked at the sight before your eyes. Not a usual frequenter of our city, a polar bear was spotted roaming around the streets looking sad and homeless.  This polar bear was taking action for the Arctic in Downtown Vancouver as part of a Greenpeace action, aimed at raising awareness of the melting Arctic ice and environmental threats related to proposed oil drilling in the area.

Greenpeace canvassers from the Vancouver office organized this fun and friendly event to grab the attention of passersby in hopes of raising awareness of their “Save the Arctic” campaign. As they explained to the public, a main focus of their campaign is Shell’s attempts to drill for oil in the Arctic, now that there is a record-low ice coverage in the area and previously inaccessible oil reserves are becoming more accessible. The activists explained that with only an estimated three years of global supply, the risks associated with drilling for oil in the Arctic just aren’t worth it. The group depicted Shell executives as clowns, and compared Shell’s Arctic oil-spill response plan (or lack thereof) to a circus. They chanted that there is no proven method for cleaning an oil-spill on ice or under it, and that they “want Canadians to know what they are risking” if they allow oil drilling in the Arctic to occur, suggesting irrevocable environmental damage including devastation to unique ecosystems. They canvassed their fellow Vancouverites for petition signatures calling on the United Nations to take action for the Arctic and declare it a global sanctuary. 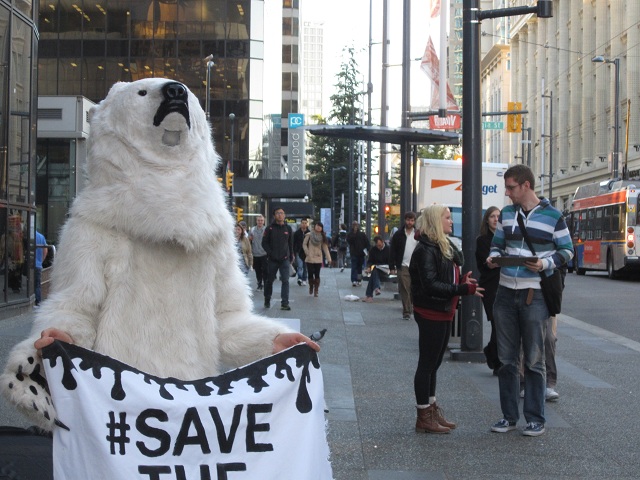 The activists spread a clear message that according to Greenpeace, the only real and definitive way to prevent an oil-spill in the Arctic is simple; don’t drill there. It looks like Greenpeace and the environmental movement are alive and well in Vancouver.