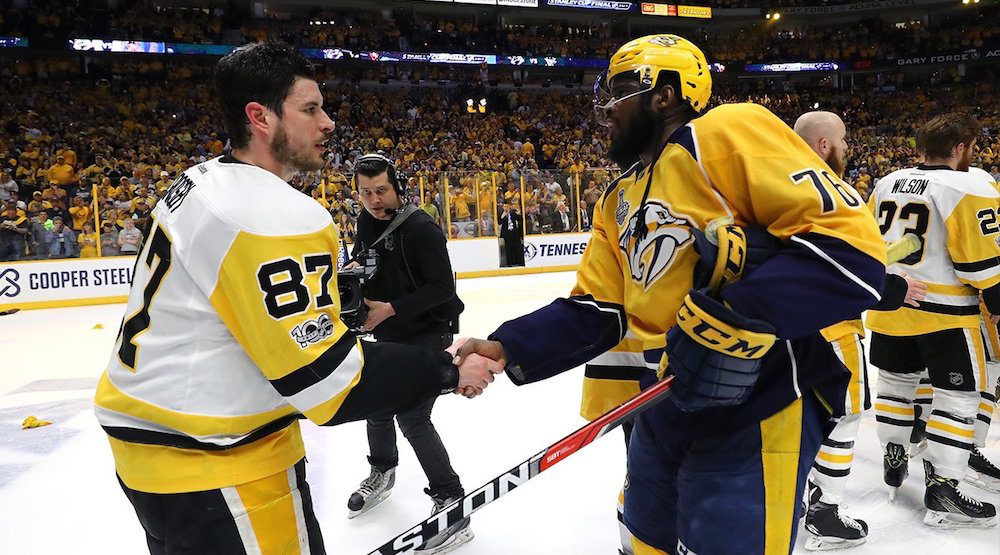 Having suffered the worst loss of his career, PK Subban was gracious in defeat.

The former Canadiens defenceman saw his run for the Stanley Cup come to an end on Sunday, as the Predators lost 2-0 to Pittsburgh in Game 6 of the Final.

The Penguins were still celebrating on the ice, when Subban spoke to Hockey Night in Canada’s David Amber.

“It stings,” Subban said, speaking at a time when many choose to sulk. “Obviously there’s a lot of emotion, a lot of tears, and there should be. Everybody cares and we wanted to obviously lift the Cup this year, but it didn’t happen. The biggest thing that we got to take from this is remember the feeling.”

Subban is eccentric, and sometimes that can rub people the wrong way. But he’s great for hockey.

P.K. Subban showed up to Bridgestone Arena with a bag full of mouthwash. Subban having some fun with the all the fake outrage. #Preds pic.twitter.com/W74gJ6femC

After creating a bit of a sideshow by saying Crosby told him he had bad breath, Predators management appeared to be displeased with him, minimizing his interactions with the media afterwards.

Some people have even suggested that Subban’s comments woke Sidney Crosby up, a ludicrous statement to make when you consider we’re talking about the best player in the world. Crosby wasn’t snoozing, he was already awake and wouldn’t be silenced forever.

But in a sport where players refuse to touch the Conference Final trophies because of superstition, should we be surprised?

“That’s a good hockey team over there that beat us,” Subban said solemnly.

It would have been easy for Subban to be negative. A disallowed goal because of a quick whistle could have been the difference in Game 6, but the call went against the Predators. It was a bad call, but that’s hockey.

“We’re going to be back here again next year. With our group, we got a young team, we got a lot of guys that are coming into their own.”

Proud of my team 👊🏿 @PredsNHL pic.twitter.com/d5jT8NA3jm

Subban doesn’t follow all of hockey’s protocol, and that’s a good thing. He gave the Cup Final some extra life and flavour, and it lost some of that when someone decided to keep him quiet.

It was successful first season in Nashville for Subban, despite the bizarre ending. He finished with 12 points in 22 games and received a ton of ice time against the opposing team’s best players.

The Predators, as Subban says, are still young. They’ve exceeded expectations and lost to a better team. With the right offseason moves, Nashville could certainly find themselves back in the Stanley Cup Final, and could even win it.

It was a tough loss but @PKSubban1 wants to remember the pain, saying “we’ll be back again next year.” #StanleyCup pic.twitter.com/aBql1vFRgK