It’s common for those behaving cruelly to say they are just “joking around” or “having fun”, but bullying and the distress it causes is no joke. B.C.’s Pink Shirt Day on February 25 hopes to gather support and awareness for the cause.

The CKNW Orphan’s Fund hosts the annual Pink Shirt Day campaign where 100 per cent of sales of their signature pink t-shirt go toward anti-bullying programs across B.C. Since 2008, the campaign has raised over $830,000 for bullying prevention.

The campaign also encourages everyone to head out of the house on Wednesday wearing pink.

“Someone shouldn’t be judged because they’re wearing a pink shirt,” she adds, referring to the national news story from 2007 when a grade nine student from Nova Scotia was bullied for doing just that.

Placing bullying in the limelight, even just for a day, can inspire people to make changes in their own personal life. “It’s a learned behaviour. They learn it from media or from watching their parents, or anywhere,” Schaeffers mentions.

Part of that self-reflection is understanding what bullying behaviour is.

According to the RCMP, cyberbullying “involves the use of communication technologies such as the Internet, social networking sites, websites, email, text messaging and instant messaging to repeatedly intimidate or harass others.” Included examples of cyberbullying are:

Recent stories of cyberbullying in B.C. have exemplified the degree to which the form of harassment impacts its victims. The well-known story of Amanda Todd, a 15 year-old Coquitlam student who took her own life in 2012 after years of bullying online, brought the effects of cyberbullying into media attention.

Social bullying is someone targets another’s reputation and relationships. The often subtle behaviour is likely one of the most common types of bullying among all age groups.

Behaviours included in social bullying, according to stopbullying.gov, are:

When we say or write mean things about someone else, that is classified as verbal bullying. We have all heard of the phrase “sticks and stones may break my bones, but names will never hurt me”, but this statement is untrue. While it is amazing if someone is able to hold this attitude, some of the worst bullying is done through name-calling or making threatening statements.

While the bruises of physical bullying may disappear after a few days, the damage does not. This aggressive form of behaviour can cause serious psychological harm, according to PrevNet. School yard rumbles seem all too familiar in movies and television, making children believe this type of behaviour is normal, but any kind of physical torment is considered bullying.

Physical bullying, according to stopbullying.gov, includes:

Bullying in the workplace

Because the workplace is often associated with heated discussions, critical feedback and close quarters, bullying can quickly become a problem. While employees may create a work-centric community, close contact, competition and hierarchy can cause tension and a breeding ground for bullying.

The government of B.C. hopes to address bullying at work by helping to determine what is and what is not bullying. Generally, they define the behaviour as the “intention to intimidate, offend, degrade or humiliate.” On their website, they list the following actions as examples of bullying:

The site also lists examples of behaviour that, while unpleasant, is not classified as bullying:

Pink Shirt Day is about supporting the prevention of bullying across the province, starting with oneself. Beyond the goal of raising funds for anti-bullying projects across B.C., the CKNW Orphan’s Fund hopes everyone, no matter their age, takes a look at their contribution to the problem and the solution.

To donate or learn more about Pink Shirt Day, visit the website at www.pinkshirtday.ca. 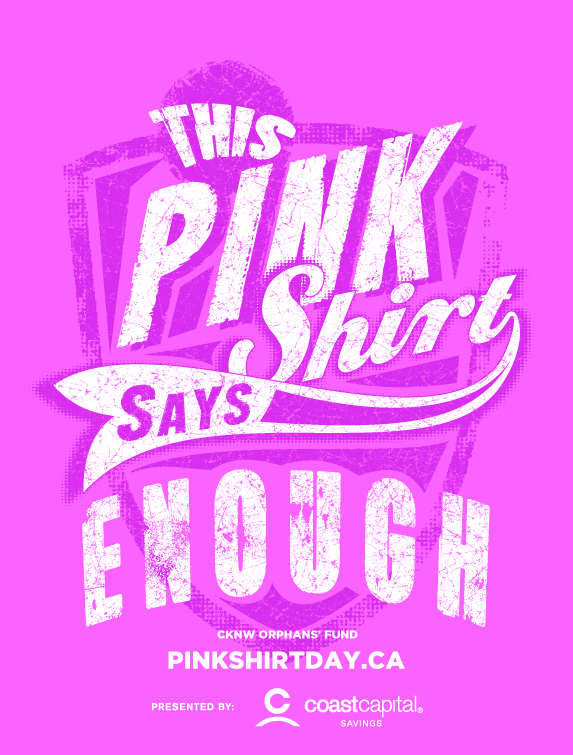