Phrike FilmFest 72 Hour Film Competition is a thrilling, no holds barred race which will challenge fledgling and professional filmmakers of all ages to bring their own unique horror-themed short films from script to screen in less than 3 days.

Participants will then have the opportunity to vie for $20,000 in prizing (including a $5,000 cash prize for best film), the Grand Goblin Award and more, at the Imperial Theatre on October 19, at the Sheraton Wall Centre in downtown Vancouver, where qualifying films from the Phrike FilmFest 72 Hour Film Competition will be premiered for the public, and judged by a panel of their peers.

Participants must register no later than October 7th, 2014 and will begin their filmmaking challenge on October 10th when top secret packages will reveal assigned elements such as dialogue lines, scene shots and props which they must incorporate into their 13 minute-or-less spine-tingling horror flicks.

“We chose the word Phrike as the moniker for this competition because its meaning is as unique and frightening as the short films we know each participant will deliver,” explains John Craig, vice president of New Image College, the festival’s primary sponsor. “Phrike – pronounced freak-ee – takes its name from the Greek goddess of horror, which is meant to inspire and embody the spirit of this competition.”

“Vancouver has so much talent, right across the board,” says Craig, “from actors to writers to makeup artists to students who want to work in this industry. We’re really looking forward to rewarding them for their hard work and creativity by offering cash prizes and scholarships, as well as screening their horror films to the public at The Imperial. It’s a Halloween tradition we hope to continue.”

The public will also get a chance to vote online for their favourite scary short film. 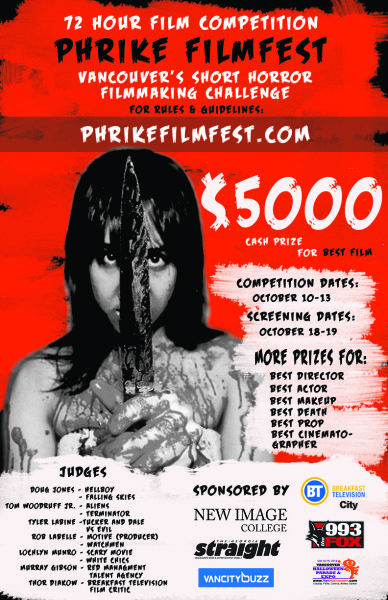 Enter for a chance to win a Spa Day Package at New Image Spa for yourself + 2 guests or 1 of 5 pairs of tickets to Fright Nights at PNE.

2. Leave a comment below telling us your favourite horror movie. (1 entry)