In 2011, the only Canadian bank note depicting women were replaced by the image of an icebreaker. Now a petition urging the Bank of Canada to put women back on our bucks is gaining traction.

Historian Merna Forster launched the Change.org petition, with the hopes the Bank of Canada would see how important it is to Canadians that we celebrate the contributions of women to the nation’s history.

Forster’s efforts got underway when the new polymer bank notes came out, reports CBC. The previous $50 bill, launched in 2004, depicted the womens’ rights crusaders known as “the Famous Five” and feminist Therese Casgrain, only to be replaced by the image of…a boat.

In 2012, the image of an “Asian-looking” woman was purged from the $100 bill, following complaints about her uncertain ethnicity.

The website Women on Canadian Banknotes includes a portal to Forster’s petition, which has over 50,000 signatures so far, as well as a $100 bill image generator that allows users to suggest Canadian women and see how they might look immortalized on the paper money.

Suggestions include authors Margaret Atwood and Lucy Maud Montgomery, silent film-era actress Mary Pickford, and the National Women’s Hockey Team, along with a number of political leaders, artists, professionals, musicians, and activists from across the country. 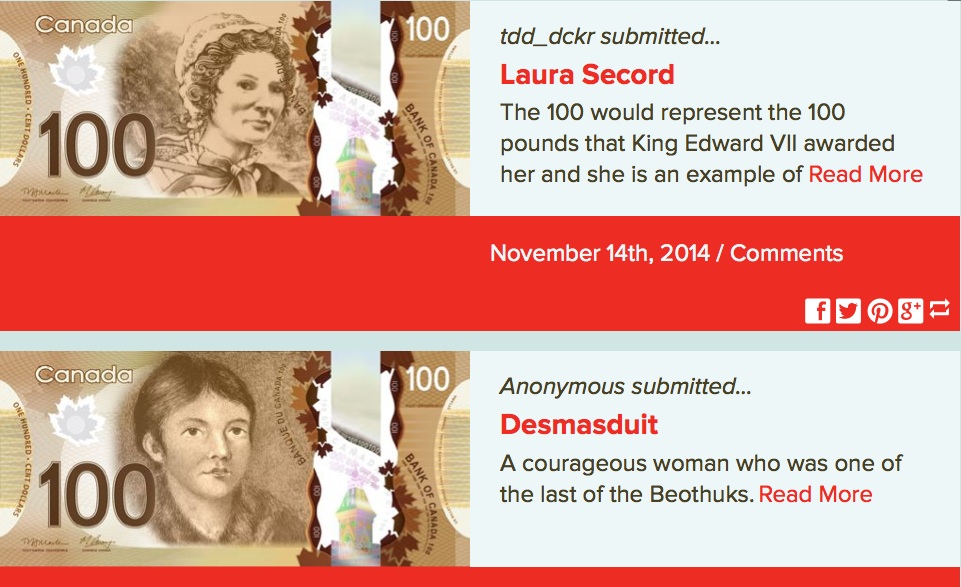 Forster says the participants in the idea generator and petition “don’t just want all these old white men,” on Canadian money.

Heroines.ca also takes a look at the scant representation women have had on Canadian currency:

Where are Canadian women on the currency of our country? What heroines have been selected to show their faces on our coins and paper money, and remind us of their contributions to Canadian history? You will have to search a long time to find them.

In November 2013, when Forster’s petition had about 22,000 signatures, Bank of Canada governor Stephen Poloz told the Canadian Press he was “absolutely open” to the idea of having women on our country’s bills, but that it was not something that could happen right away.

“Poloz says the process takes years and includes public consultations and focus-group testing to settle on a theme and the images to display the theme,” explained the Canadian Press.

The Bank of Canada has not issued new comments about the ongoing popularity of Forster’s petition.