Thirteen months after Spider-Man’s alter-ego was fatally squashed in the pages of his comic book, Peter Parker is about to make a miraculous recovery.

The nerdy Queens-born super hero had gone out losing to the nefarious Dr. Octopus — who trapped his arch-enemy’s mind in his own dying body just in time for him to croak. Doc Ock, aka Otto Octavius, survived in Parker’s body to take up the mantle of Spider-Man with no one else the wiser.

Writer Dan Slott penned the swap that saw “The Amazing Spider-Man” end with issue number 700 at the end of 2012. With that in place, the long-running book was replaced by Octavius’ adventures in the twice-monthly “Superior Spider-Man.”

Slott had known Parker’s demise wasn’t permanent and the wall-crawling Mets fan would be back in the relaunched “Amazing Spider-Man” series, illustrated by superstar artist Humberto Ramos, that debuts this April, but he had to endure reaction ranging from death threats to Internet backlash to childrens’ tears while maintaining secrecy.

“To do that for a solid year of my life, that’s the hardest thing I’ve had to do — to look small children in the eye at a convention and lie to them,” says Slott. “One of them with an honest-to-God Little League uniform and a quivering lip. Inside, part of me was dying.”

He did, however, cave under the pressure when he met actor Andrew Garfield on the set of “Amazing Spider-Man 2.” After the actor who plays Parker on the big screen expressed his shock over the death of the beloved character, Slott admits he dropped some secretive hints.

“(Parker’s coming back) just in time, fancy that, for a major Spider-Man motion picture,” quipped Slott. “It seems uncanny. It was very nice for Sony to schedule the movie around the story.”

Bumping off the face of franchise, though, was a risky move.

Ever since Stan Lee and Steve Ditko (and possibly Jack Kirby) launched the awkward super hero in 1962’s “Amazing Fantasy” # 15, Parker even more than Spidey has been the publisher’s most popular creation. He’s relatable because his Spider-Sense couldn’t help him manage his personal life any better than his readers could manage theirs.

“It would have been great if you took a photo of my face at that time. I was not very thrilled,” says Marvel Editor in Chief Axel Alonso of Slott’s initial pitch, during an editorial retreat several years ago. “Let’s just say that as cynical as the hard-core fanboy was, I was more cynical.” 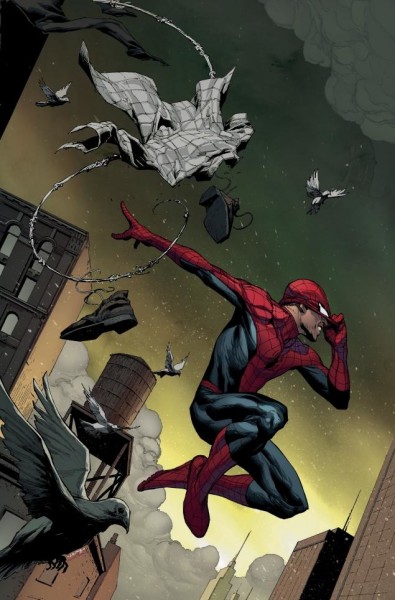 Alonso, however, adds that after five decades of stories that featured Parker battling a recurring set of villains and personal problems, “I do feel people will appreciate him a little more after this. I do think people have been taking him for granted.”

And over the past 13 months, the unthinkable happened: many fans gravitated towards the meaner, more arrogant Doc Ock version of Spider-Man — some maybe even prefering him to the goodie-two-shoes original.After all, while Octavius was in Parker’s body, he took a doctorate and founded a company, among other things.

“It feels like for every reader lost another reader jumped on,” says Matthew Klein, 27, a worker at Forbidden Planet, a comic book store near Manhattan’s Union Square.

“We’ve gone over 30 issues without Peter Parker, so when we let him out of that box and he gets to put on that costume again and he gets to swing through the sky, it’s going to be the greatest feeling,” says Slott.

“But there’s a twist. There’s always a twist.”