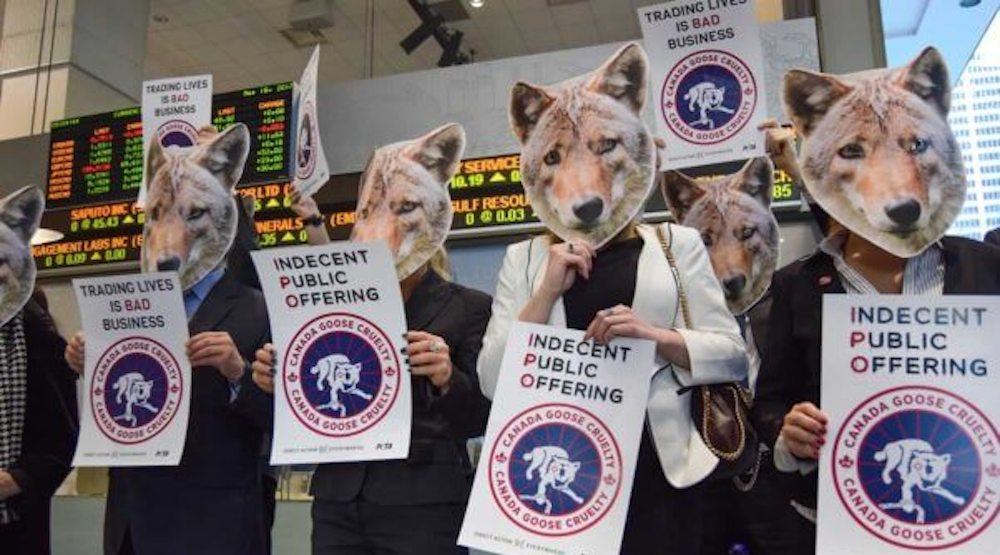 Canada Goose released 20 million shares at $17 apiece, a price above its initial expectations, raising $340 million for the company. According to PETA, it was able to purchase $4,000 worth of shares – the minimum required for the organization to submit shareholder letters and partake in annual shareholders meetings.

Protesters with the animal rights group were also seen outside the TSX and NYSE today.

PETA has long been vocal against the luxury apparel manufacturer’s use of coyote fur, which it claims is unethical as it is harvested using cruel methods. However, Canada Goose has countered the assertion, saying its practices are humane and align with domestic and international standards.

With its use of fur, the company maintains its harvesting practices are trackable as it only purchases fur from licensed North American trappers. As well, its supply of fur largely comes from northwestern Canada and the United States where coyote populations are abundant. It claims that its activities help prevent the overpopulation of the species.

Canada Goose has acknowledged that animal rights activists such as PETA are a threat to its business. A filing with the Securities and Exchange Commission reads:

“We have been the target of activists in the past, and may continue to be in the future. Our products include certain animal products, including goose and duck feathers in all of our down-filled parkas and coyote fur on the hoods of some of our parkas, which has drawn the attention of animal welfare activists. In addition, protestors can disrupt sales at our stores, or use social media or other campaigns to sway public opinion against our products. If any such activists are successful at either of these our sales and results of operations may be adversely affected.”

The Toronto-based apparel manufacturer said it saw revenue of $291 million in 2016. It saw a gross profit of $146 million and net income of $27 million that year.