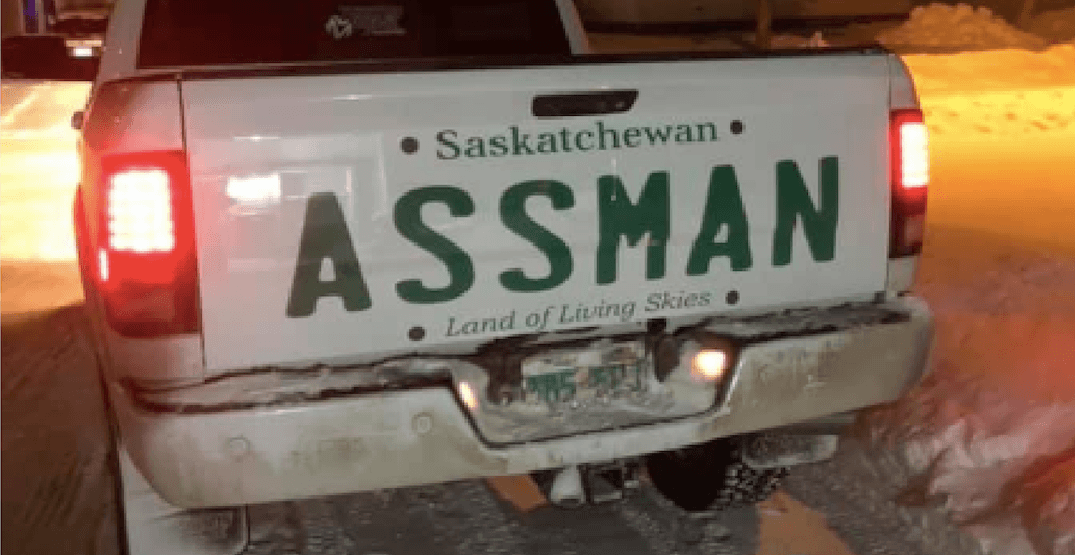 What do you do if the personalized licence plate you request is deemed too offensive by the powers that be?

Okay, let’s back up a little bit.

Assman (reportedly pronounced Ossman) is a resident of Melville, Saskatchewan.

Not content with a standard-issue plate for his truck, he applied for a personalized one – in this case, his last name.

However, apparently having “Assman” sprawled on a licence plate was a no-go as far as SGI –  Saskatchewan’s driver’s licensing and vehicle registration arm – was concerned.

Assman didn’t give up, though. He appealed the decision, which was ultimately refused, and it was then that he decided to make a drastic statement of his own.

While his truck ended up with a standard provincial plate in the end, it now also bears a giant replica licence plate in the form a sticker on the tailgate with – you guessed it – “ASSMAN” front and centre.

“I know there are a few people out there that are wondering why I’m making such a big deal about getting denied my last name as my license plate,” he wrote on Facebook. “There are too many snowflakes out there that get their feelings hurt about nothing.”

Assman said that people “need to learn to suck it up once in a while [and]  just because you don’t like or feel something is inappropriate, you don’t have to make a big deal about it.”

If it “isn’t illegal or going to harm someone, mind your own business and carry on with your own life,” he added.

While the new sticker now adorns the entire back of his truck, the Saskatchewan resident said he “could have got a plate for the front but I really wanted a vanity plate on the back of my truck.”

So why put so much effort into something like this?

Beyond the personal factor, Assman had a simple explanation: “I have three weeks off and nothing planned so I need something to occupy my time.”