Yesterday, Vancity Buzz began a poll asking readers whether they found the recent “Chinese Driver” decals, mimicking the ICBC “L” or “N” stickers, offensive. With over 15,000 survey responses, the results are in.

“Chinese Driver” stickers have been found displayed on the backs of vehicles around Metro Vancouver for several years now, especially in Richmond and Vancouver’s Westside. According to yesterday’s CTV report, these signs are mostly purchased by Chinese people and placed on their car as an ironic, self-deprecating joke.

While a lot of people praise the decals and the people who buy them for their sense of humour, many people also find them to be racist and promoting stereotypes.

Intrigued by this divide, we started a non-scientific online poll to determine the common attitudes toward the signs.

Only a small percentage, 12.97 per cent, believed the “Chinese Driver” decals are “most definitely” offensive. 1.9 per cent remained undecided. 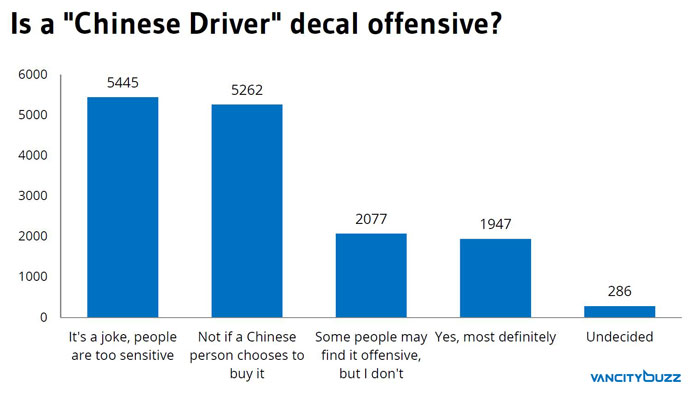 Of those who believed the signage was offensive, comments included:

And on the other side of the spectrum, people firmly disagreed.

Some came at the issue from a logistical perspective.

The topic of racism in Metro Vancouver is an issue we have looked at before. Our population is one of the most diverse in the country with 43 per cent of residents having an Asian heritage.

Regardless if you think these “Chinese Driver” decals are racist or not, these are the type of conversations that need to happen to make a difference in a city where subtle racism does still exist.