Finally the wait is over and the Pemberton Music Festival 2015 lineup is out.

“We might be announcing our lineup on April Fool’s Day, but we aren’t joking around,” said HUKA Entertainment co-founder A.J. Niland. “The lineup is exceptionally deep and each and every day will be full of surprises and special moments to match the magic of our beautiful Pemberton Valley festival site.

Pemberton Music Festival is a four-day contemporary music festival in British Columbia’s scenic Pemberton Valley, near the foot of majestic Mt. Currie. Produced and promoted by HUKA Entertainment, in collaboration with the Village of Pemberton and land partners the Sunstone Group, the Lil’wat Nation and Squamish-Lillooet Regional District, the festival turns Pemberton Valley, located less than 30 minutes from Whistler, into a premiere musical playground on par with HUKA’s other award-winning festivals.

“It’s always a bit of a battle as a small indie promoter to get the acts you want, but we worked extra hard this year to make sure we’re bringing the best to B.C.,” Niland said.

The festival provides a blend of on-site camping and off-site hotel lodging options. While camping options will allow attendees to stay directly on festival grounds, those seeking the comforts of a home away from home can secure traditional lodging in nearby Whistler, BC. Non-camping patrons will have access to festival-supplied transportation, including shuttles from Whistler.

Campgrounds for 2015 will be expanded to include property on both sides of the Sea to Sky Highway, which means that campers parked on the south side of the road opposite the festival grounds will have the option to camp there, and will no longer be required to carry their gear across the bridge spanning the road to the festival site. Additionally, paths from other parking lots leading to festival campgrounds will be upgraded to include hard-packed surfaces with minimal obstructions.

Other improvements will include food service and offerings for VIP patrons as well as placement of campground amenities, including showers and water filling stations.

Advance weekend General Admission tickets go on sale this Friday, April 3 at 10 a.m. PDT and start at $279, plus a choice of camping or shuttle privileges for $89 or $29 for a Go Green pass – which are in limited supply.

Full ticketing details and 2015 prices, including VIP and Super VIP packages, are available at www.pembertonmusicfestival.com 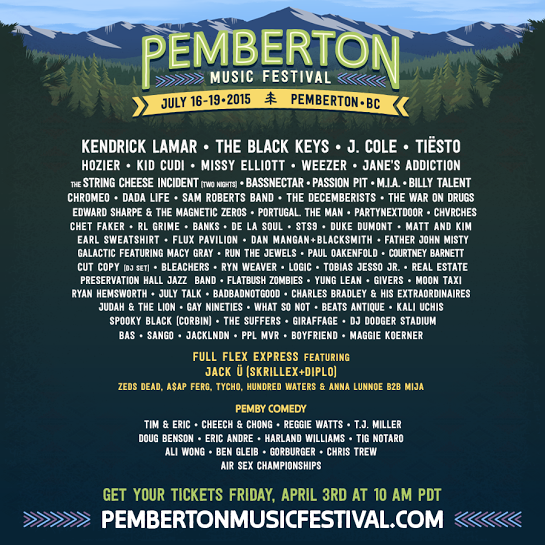