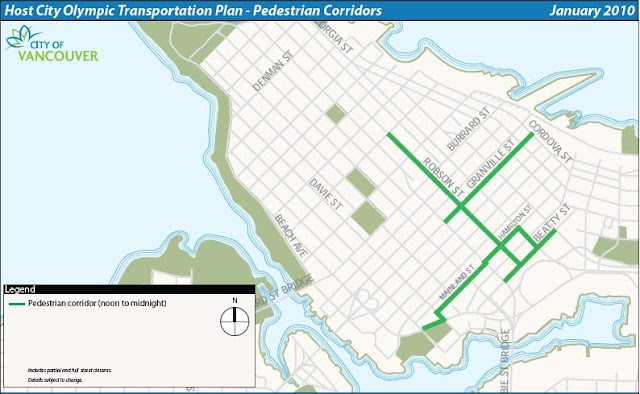 During the Olympics there will be thousands, upon thousands of extra people walking the streets of downtown Vancouver. So the city decided to create 4 pedestrian only zones from noon to midnight. This is awesome news as this allows for maximum interaction with the people from all over. Now if only Granville Street Between Nelson and Georgia was pedestrian only, hmmm…can anyone say extended patios? Oh well here is some more information.

Pedestrian activity in Downtown Vancouver will increase significantly during the 2010 Winter Games. To meet this increased demand, a number of roads that connect venues and celebration sites will be closed to vehicles from 12 noon to midnight, between February 12 to 28, 2010:

These pedestrian corridors will come alive during the Games with street lighting, banners, street vendors and more. Downtown Vancouver will be the place to be during Games time, whether you’re attending an Olympic event or just enjoying the energy of thousands of locals and visitors from around the world.[source]