PechaKucha New Westminster – Under the Stars – Volume 6 is headed riverside once again for their second annual outdoor event and will be collaborating with Vancouver Urban Spaces Initiatives (VUSI) to offer a relaxed afternoon dance party followed by a free evening of engaging presentations, thoughtful conversation and shared inspiration at Westminster Pier Park on July 19, 2014.

“The support and response for our events have been incredible and continue to grow,” said organizer Neal Michael. “We’ve really built a community around PechaKucha and last year’s summer edition saw over 300 attendees – people from New West and across the Lower Mainland. This year we are super excited to be collaborating with Vancouver Urban Space Initiatives (VUSI) to bring their Special Summer Series – a daytime electronic music dance party and picnic – to Pier Park for an even bigger reason to come down, connect with people from the neighbourhood and be inspired.”

Westminster Pier Park is the ideal venue for an outdoor PechaKucha New West. Opened in June 2012, it occupies 3.84 hectares of former industrial land next to the Fraser River; its award-winning design incorporates festival lawns, playgrounds and later this summer will feature an urban beach. Many see the park as a symbol of the city’s remarkable revitalization.

“The success of PechaKucha speaks to New West’s increasing self-confidence and dynamism as a city with a distinct identity,” said co-organizer Melinda Michael.

It’s also fitting that The Salient Group — the company transforming the historic Trapp and Holbrook blocks into modern homes in downtown New West — is the lead sponsor for a second year running. It’s thanks to them, plus additional financial support from the City of New Westminster, the Vancouver Foundation and other local sponsors, that an event of this size can be offered at no cost.

This special event kicks off at 4pm with music from VUSI. Attendees can bring along a picnic or purchase food supplied by FarmCity Fresh Cart, Longtail Kitchen or park vendor Wally’s Burgers, and grab a beverage from the beer garden – featuring selections from New Westminster’s recently opened Steel and Oak Brewing Co. The 10 PechaKucha talks given by presenters from a variety of fields and backgrounds will begin at 9 pm – or soon after depending on the light, on a large outdoor movie screen. 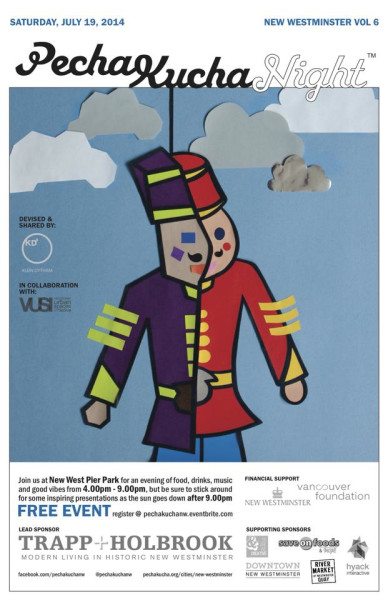 Register for your free “ticket” through pechakuchanw.eventbrite.ca. The website allows organizers to keep attendees updated with event information.