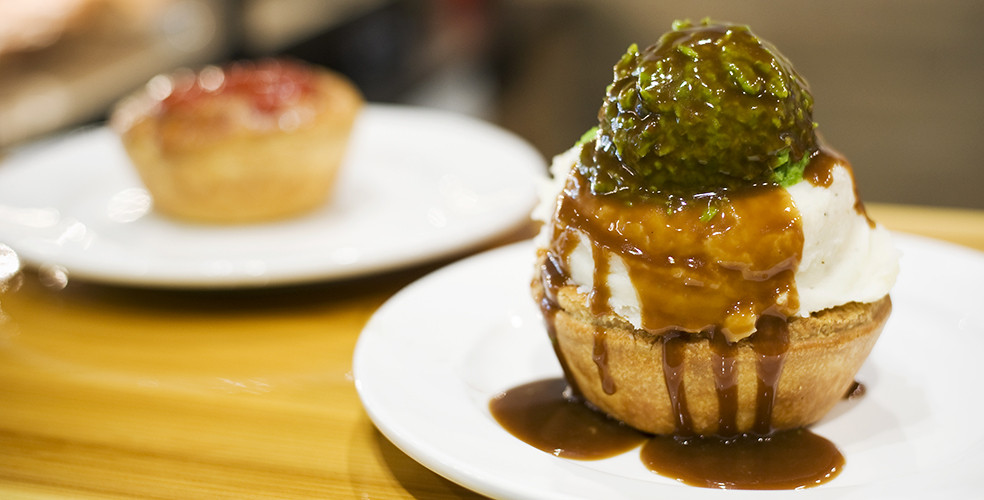 It’s been a long time coming, but finally Vancouver’s location of the Whistler favourite Peaked Pies is open for business in the city’s West End neighbourhood.

While the hope was to have Peaked Pie’s mountainous creations served up this August, the doors to the location at 975 Denman Street were finally thrown open this week.

With a menu mostly matching the Whistler flagship, Vancouver’s Peaked Pies offers a selection of Aussie-style meat pies, from mince and steak to kangaroo. Look for specialty flavours, too, such as butter chicken or veggie, and breakfast pies as well.

Although “peaked” is a fun bit of word play when you’re making pies in a ski town, the “peaked” here is all about adding on a “peak” of toppings, namely mashed potatoes, mushy peas, and gravy, for an additional charge. Pile it on, baby!

Beyond pies, Peaked Pies Vancouver has savoury rolls (i.e. spinach & feta, or sausage), sweet pies, quiche, and other baked treats, as well as a coffee/espresso program where you can order up a true Aussie Flat White with confidence.

Unique to the Vancouver location is their selection of Thick Sliced Toast with spreads (Peanut Butter, Cinnamon Sugar, Raspberry Jam, and even–gasp–Vegemite).