She’s a foodie, blogger, jogger, and now, Erin Ireland is the proud owner of a Mexican mutt that loves to give hugs.

Ireland, owner of To Die For Fine Foods and regular contributor to CTV Morning Live, had been passively looking to adopt a dog for the past few years but had never found “the one.” She briefly fostered a four-year-old whippet but gave her back to the breeder after the dog became depressed living in the city.

I had the chance to sit down with Erin and ask how she found the dog of her dreams on her Mexican vacation last month – and how she almost missed out on finding “the one.” 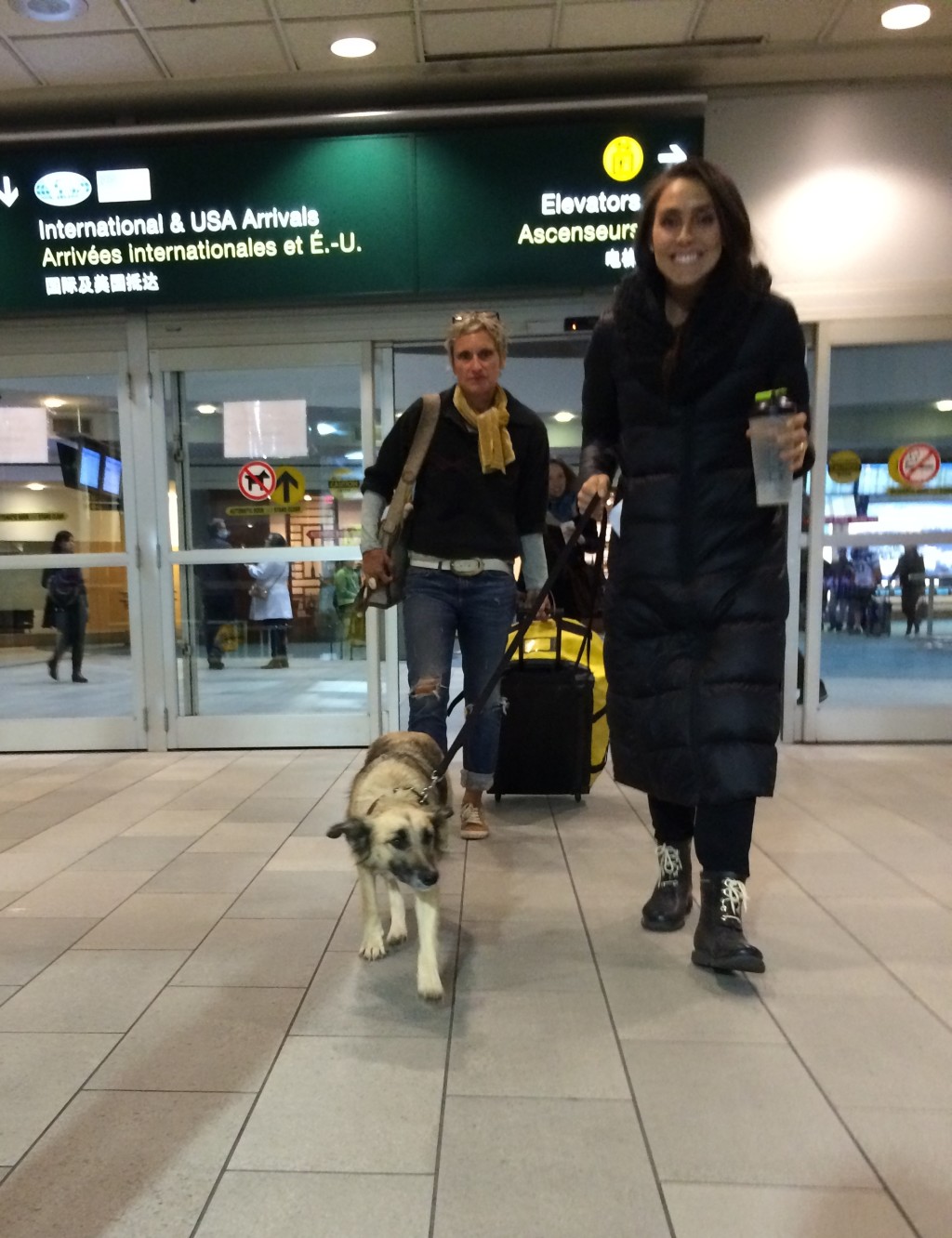 Erin with her new magical mutt at YVR Vancouver Airport

You’ve been dog hunting for a while but it took going to Mexico to find her. Tell me about her.

When “you know….you know.” For the past year I’ve been open to adopting a rescue, but I hadn’t yet found “the one.” In early January, my brother and I booked a holiday in Baja, Mexico and realized it might be a great opportunity to find my first baby, as there are so many strays in this area.

Ironically, after a week of scouring the dusty streets, we found my girl at an unofficial shelter in Pescadero, Mexico on our way to the airport. Soon before our departure, we had learned about Mariposa, a big-hearted local woman who cared for strays in her big yard. Evan (my bro) realized we had an hour to kill before our flight and suggested we try to find her home, because “what if?” Plus, he said he had a feeling…

After 30 minutes of driving around fruitlessly, we were about to give up. Then we saw it. A big front yard, but only three dogs. I told Evan we should just leave – we didn’t want to be late for our flight. He insisted we check it out. We walked up to the gate, and a sweet miniature shepherd-cross approached me and laid down directly in front of me. I petted her and she rested her head directly on the ground and shut her eyes. She seemed so grateful.

We spoke to Mariposa, an incredible woman, and took her phone number. Back in the car, it took one minute for my tears to begin pouring. It had taken less than 10 minutes for me to realize that this was my angel. Through tears, I called my fiancé Darren to tell him what had just happened. He told me to do what I had to do.

We couldn’t change our flight to bring “Mamahachi” (the name Mariposa had given her as she’d arrived to them while the movie Hachi, with Richard Gere, was playing – and because she’d had at least two litters with nipples to prove it) home with us. Fortunately, our friend April was traveling from Baja to Vancouver in just a week’s time, and she graciously agreed to bring Mama with her. Thanks to an amazing volunteer named Karen, the rabies certificate and travel crate were sorted and she was on her way. I am forever grateful to these ladies, and my bro for having “that feeling!”

That’s how I met my new shadow, my dog-mate, the dog of my dreams. She’s turned out to be even more amazing than I could have dreamed. As her mother, I’m obviously biased, but she really is perfect. Fortunately, she is extremely loveable and Darren – her new dad – had no trouble falling just as in love with her as I am. 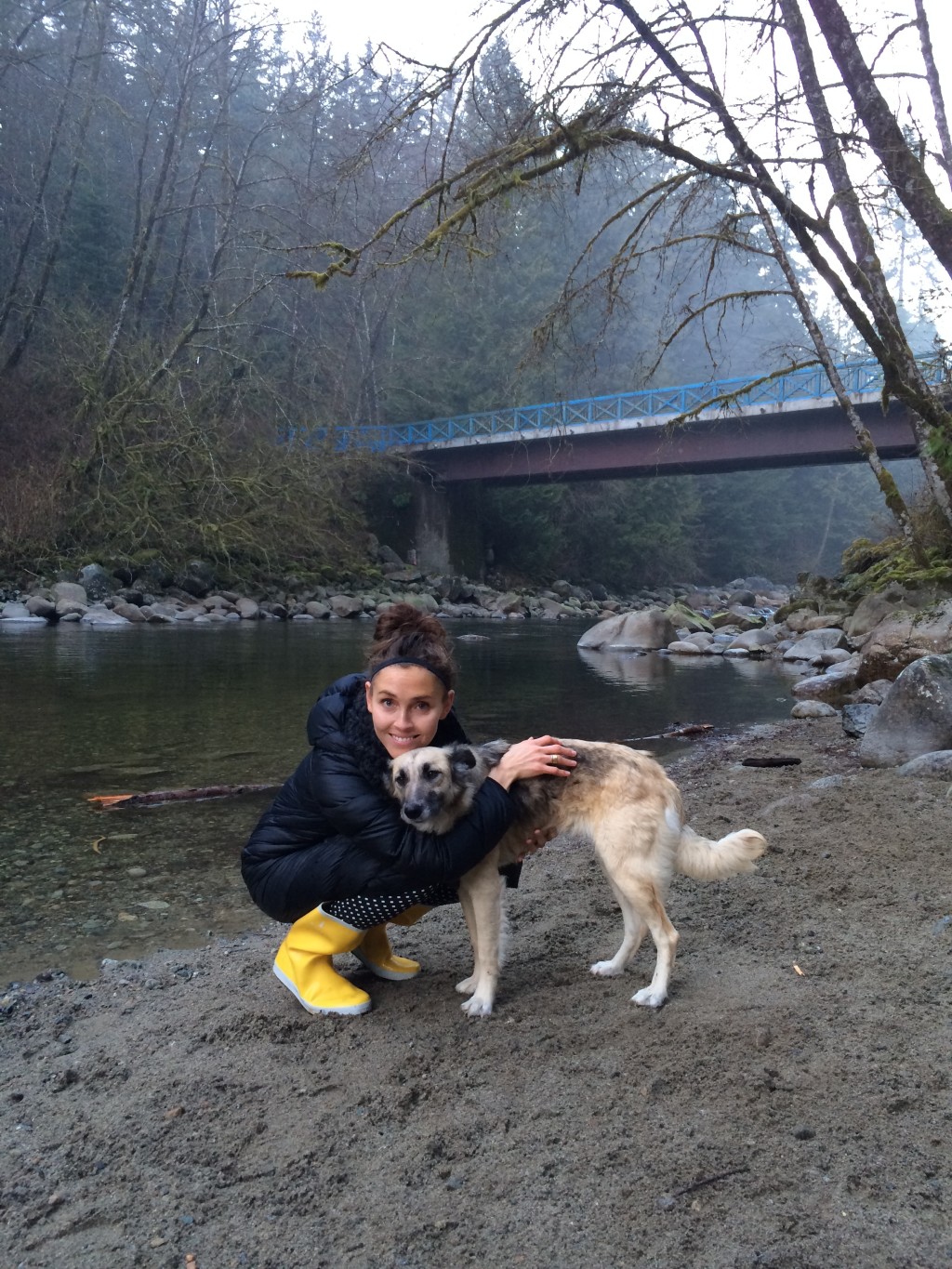 Erin taking her new BFF for a walk. With a hug break.

Do you think she has a distinct personality?

She is the sweetest, gentlest little angel and an eternal optimist. After her four-hour flight from Cabo, she emerged from her crate looking as though she’d just woken up from a coma – dazed and confused. But on the walk to the car, her tail wagged as she curiously checked out her new, much chillier surroundings.

One of my favourite things about her is that she loves to hug. Often, while we’re out walking, she’ll stop, square up to me, then gently rise up and place her paws on my shoulders. I kneel down for a hug and we stay like that for a while. I’ve asked the vet and our obedience class teacher what it means and their only guess is that she’s simply trying to get close.

At home, her tail wags when I walk by her as she’s lying down. During cuddle sessions she looks me deeply in the eye. She is soulful and so, so intelligent. I talk to her and imagine her understanding everything perfectly. Despite her tough beginnings, she is the happiest little thing. To give you some context: she has no front teeth and only half of her lower canines. One guess is that she used to chew on rocks as food was scarce. 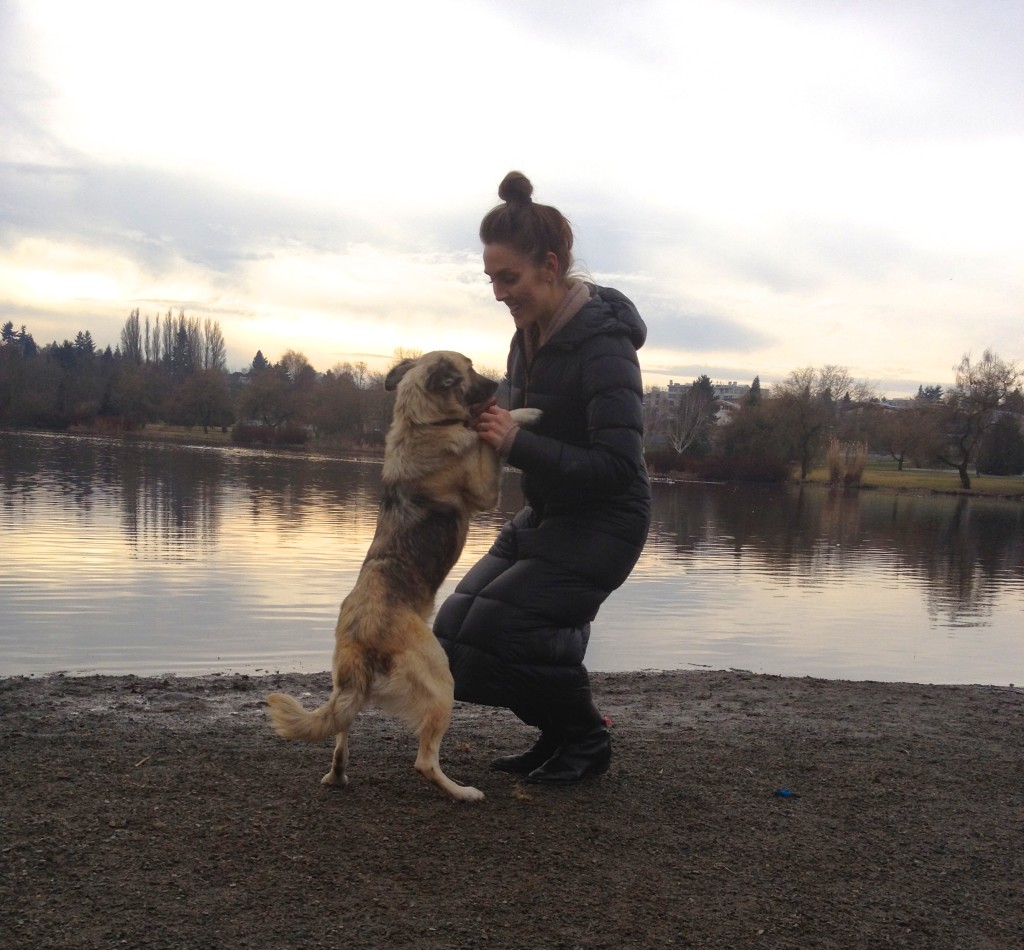 You’re an active Vancouverite. How do you see your dog fitting into your busy lifestyle?

She’s my side-kick. She’ll be joining me for everything she can: errands, business meetings, coffee dates, workouts. I just wish I could bring her to restaurants. She never barks and usually lies down and falls asleep wherever we go, even the bank. My solo morning jogs are so much more fun – she loves to join and stays at my hip the entire time, even off-leash.

There are actually loads of Vancouver patios where you can take your dogs. Check out this list. 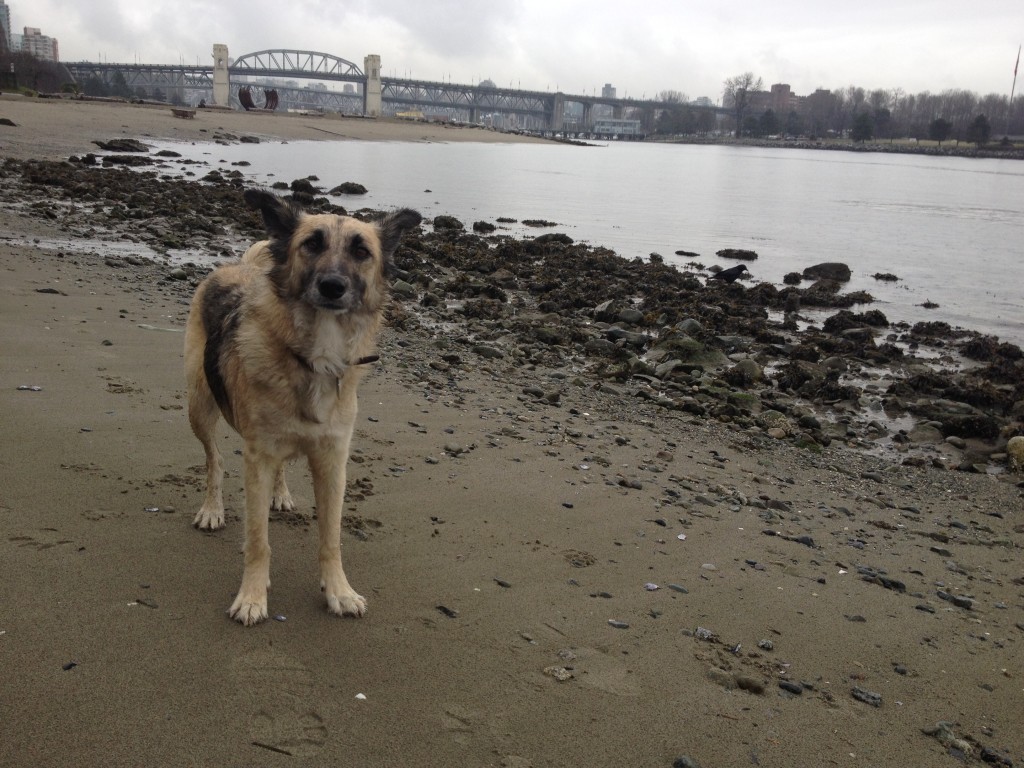 Hanging out at the beach

This isn’t your first go round with a pup. You grew up with dogs.

Yes. My parents’ first baby was a Springer Spaniel named Spanky. He was my best friend and “safety net” growing up. I was always scared of “boogey-men,” but those fears disappeared when he slept next to my bed.

Then we got Tinkerbelle, a malti-poo, and Toby the Border collie, who was my Cleveland Dam running partner. In their old age they are both such precious souls.