Nine years after retiring from professional hockey, Pavel Bure has been invited to join the Hockey Hall of Fame. He will enter the ranks alongside Vancouver native Joe Sakic, short lived Canuck Mats Sundin, and Adam Oates. Bure’s legacy as the most electrifying player to ever don a Canucks Jersey still rings true today.

Bure’s time in Vancouver is filled with controversy. He was drafted by Pat Quinn in the 6th round of the 1989 entry draft because there was confusion about whether or not he was eligible – the general consensus was that he had not played enough games. The Canucks had done a bit more digging around and found that Bure had played in enough exhibition and international games to make him available at the draft. And so the Canucks stole one of the most dynamic and gifted scorers they have ever managed to get in Vancouver 113th overall. 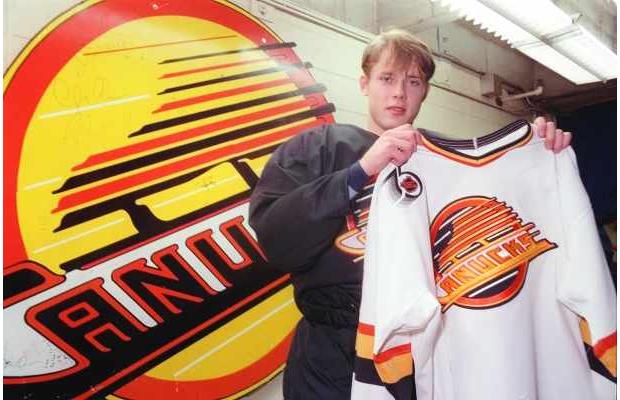 Bure’s first game in Vancouver was garnered with anticipation and awe; this was a kid who could do things with a puck that not many others in the league were capable of. From then on, whenever Bure played, excitement followed. The Russian Rocket was born.

Bure’s most significant impact would come during the Canucks’ infamous 1994 Stanley Cup run. Entering the playoffs as the 7th seed and up against the Calgary flames in the first round, the Canucks fell 3-1 in the series. After fighting back to force a game 7, Bure scored scored a breakaway goal in the second overtime to win the series.

Even though he was a scorer at heart, Bure was not one to let anyone walk all over him. Granted it’s always nice to have Gino Odjick on the ice alongside you, but Bure could throw the body when he felt it was necessary. During the second round against the Dallas Stars, Bure got fed up with the crosschecks and dirty hits coming his way. Shane Churla paid the price.

Alright so it isn’t the cleanest hit ever thrown by any standards, but it’s still one for the history books. In case you are wondering, Bure was not penalized for the play, but later received a $500 fine. Now that’s some old time hockey.

The Canucks beat the Maple Leafs in 5 games and lost to the New York Rangers in the Cup finals. However, Bure still put up 31 points in 24 games during the Cup run. His playoff point tally stood as the record by a Russian player until 2009, when it was broken by Evgeni Malkin.

After the 1994 season, Bure dealt with a series of knee-injuries. By 1998, it was made public that he was refusing to play for the Canucks and had requested a trade. He left Vancouver on a bit of a sour note with Canucks management, but that has never seemed to matter very much to Canucks fans. Bure will be remembered in this town as the guy who turned the Canucks into both a high-tier NHL club and a fun team to watch.

Here are the top 10 Bure moments, brought to you by Sportscenter: