There are no words to describe Paul Simon, so let’s just go with statistics: 12 Grammys, two Rock & Roll Hall of Fame inductions, 14 top 10 singles, and one slightly bitter ex-bandmate (more on that in a minute). The legendary singer-songwriter is in Vancouver tonight promoting his latest album Stranger to Stranger and we’ve got a sneak peek at his setlist.

Simon last visited Vancouver in 2014 with his old buddy Sting, but this current tour is his first solo outing in more than five years. Those hoping for a reunion of sorts with another one of Simon’s old buddies, Art Garfunkel, will be sorely disappointed as the two aren’t exactly friendly these days. But fans of the duo’s material are in for a treat tonight as Simon will perform “The Sound of Silence”, “Homeward Bound”, and “The Boxer” sans his old bandmate.

The Vancouver crowd will also get a preview of two songs from Stranger to Stranger which doesn’t hit stores until next week. “The Werewolf” and “Wristband” are new collaborations with EDM artist Clap! Clap! and both will be performed tonight.

Two of Simon’s albums have won the Grammy for Album of the Year (1975’s Still Crazy After All These Years and 1986’s Graceland), and a handful of songs from each will be performed as well. Fans can expect to hear classics like “50 Ways To Leave Your Lover”, “The Boy In The Bubble”, and “Diamonds on the Soles of Her Shoes”. 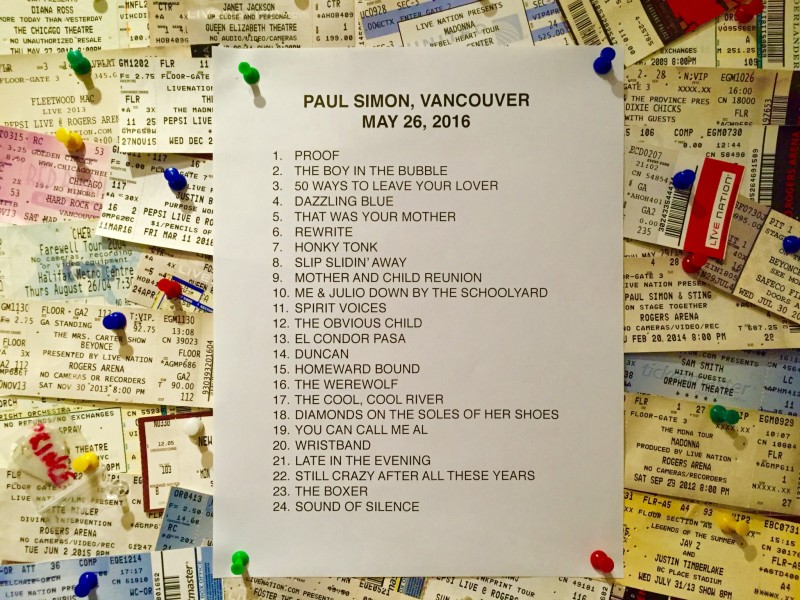 A few tickets for Paul Simon’s Vancouver concert are still available here, and a copy of Stranger to Stranger is included with every pair of tickets sold. Simon’s tour wraps June 30 with a show at the historic Forest Hills Stadium in Queens, New York which is located a few streets away from the singer’s childhood home.