Paul McCartney is a singer, a songwriter, and a “Sir”, and he’s headed to Rogers Arena on Tuesday night to perform the first of two sold-out concerts.

The Beatles, comprised of McCartney and bandmates John Lennon, George Harrison, and Ringo Starr were undoubtedly the most successful rock and roll group of all time. They’ve sold more records than any other artist in music history and their catalogue of hit songs, almost all of which were written or co-written by McCartney, have been covered by everyone from Aretha Franklin to Alvin & the Chipmunks (The Chipmunks Sing the Beatles Hits album won a Grammy in 1965).

The Beatles split for good in 1970 and McCartney went on to achieve massive success, both as a solo artist and as the founding member of Wings. Over the course of his astounding career, he’s won 21 Grammy awards, was inducted to the Rock & Roll Hall of Fame twice, and was named MusiCares Person of the Year in 2012 for his artistic achievement and dedication to philanthropy.

Sir Paul plays Rogers Arena on April 19 and 20 and demand for tickets is incredibly high – floor seats for Tuesday night’s show are going for more than $1,700 on various resale sites. According to the singer’s press release, his One On One Tour will feature “massive screens, lasers, and fireworks”, and as indicated by the setlist preview below, McCartney will perform songs from each era of his epic six decade-long career.

And here’s a look at the stage setup: 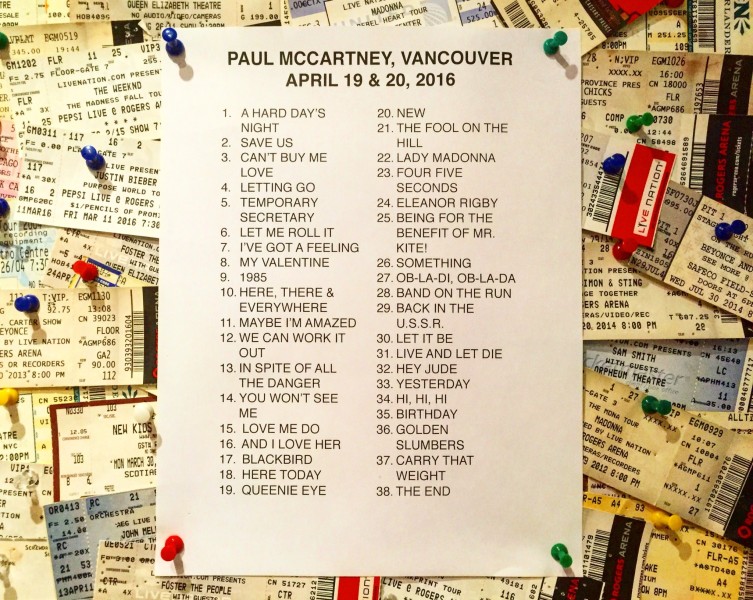