As of yesterday at 6 p.m., there is a street in Vancouver named after former Canucks general manger, team president and coach Pat Quinn.

The City of Vancouver and the Vancouver Canucks held a street renaming ceremony on St. Patrick’s Day outside of Rogers Arena just before last night’s game against the Philadelphia Flyers.

The proposal to rename a one-block stretch of Abbott Road, the 700-block from Expo to Pacific boulevards, was approved by Vancouver City Council earlier this month.

The stretch of road, a relatively recent extension of Abbott Street, runs in front of Gate 16, which was named after Trevor Linden – Quinn’s first draft pick for the Canucks in 1988. He can also be credited for the revival of the Canucks franchise, the construction of Rogers Arena (GM Place) and ending Team Canada’s 50-year Olympic gold medal drought in 2002.

Later in the evening, following an on-ice tribute to Quinn, the Canucks went on to defeat the Flyers with a score of 4-1. He served as coach for the Flyers for three seasons and won coach of the year for the 1979-80 season for leading the team to a 35-game unbeaten streak.

Last November, Quinn passed away from illness at the age of 71. The street name change only affects the address of Rogers Arena. 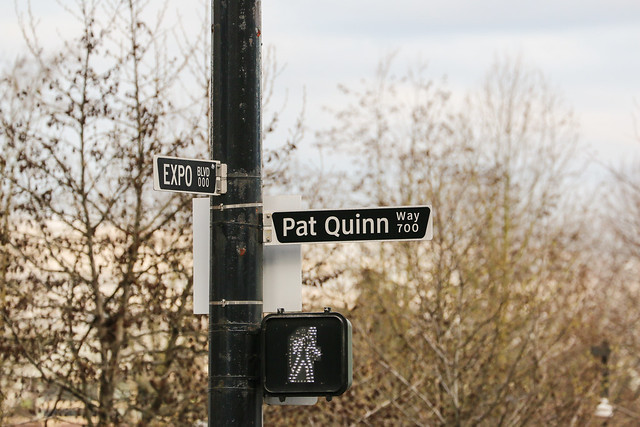