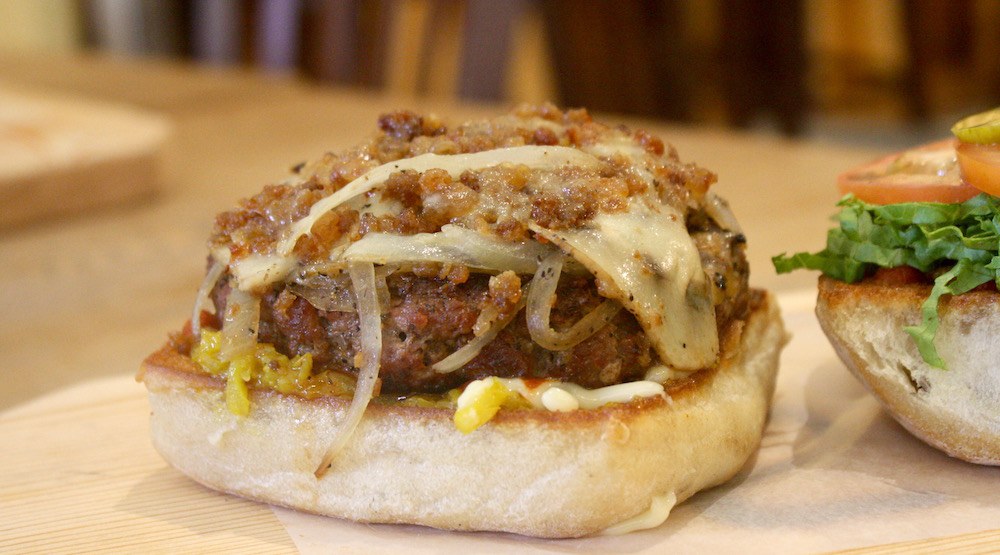 Step into Pasture to Plate: Grill, Broths & Deli on Denman Street and you’ll instantly feel like you’ve entered a rural ranch kitchen, one that serves meat straight from the ranchlands.

Since opening in February, the rustic look and feel of Pasture to Plate – p2p for short – has peaked the interest of locals in the neighbourhood along with those passing by on strolls through scenic English Bay.

It’s not just the repurposed wood that is lined along the walls of the 1,100 square-foot 47-seat restaurant that gives off ranch vibes, it’s also the food.

Everything on the menu here is made with Demeter and Certified Organic meat (which requires biodynamic agriculture – AKA the most ethical and healthy meat around). This comes straight from a ranch and rangelands located in the heart of BC’s Chilcotin which is owned and operated by p2p’s owners. 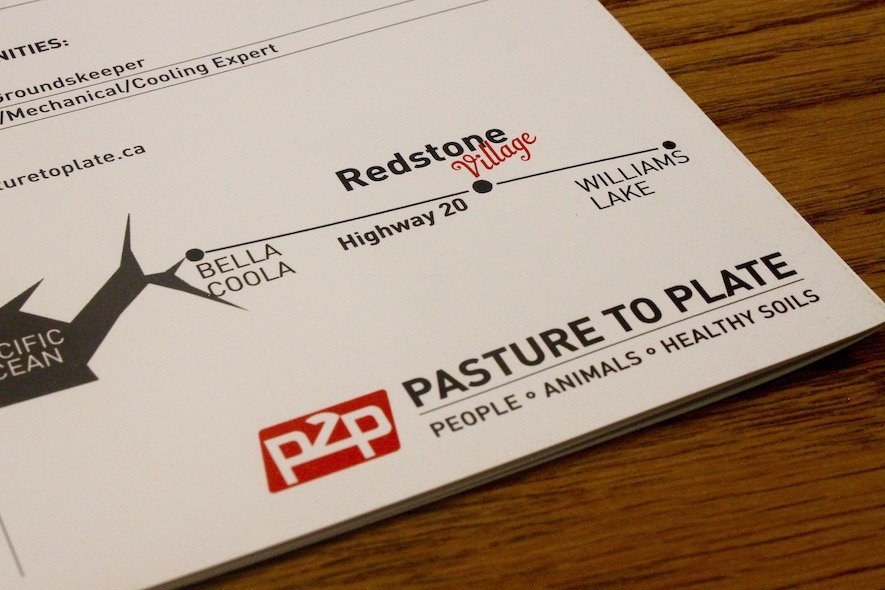 This property also houses the Chilcotin Harvest Slaughter Facility where the meat is processed, along with the KiNiKiNiK Restaurant, a full-service kitchen and dining room open to guests.

The owners of all of this are husband and wife duo Felix and Jasmin Schellenberg. In addition to running this new Vancouver bistro and the ranch in Redstone, BC (which also has overnight guest cabins), the duo operates an organic whole animal butcher shop on Commercial Drive, making p2p a business that serves customers at every stage of meat production process. 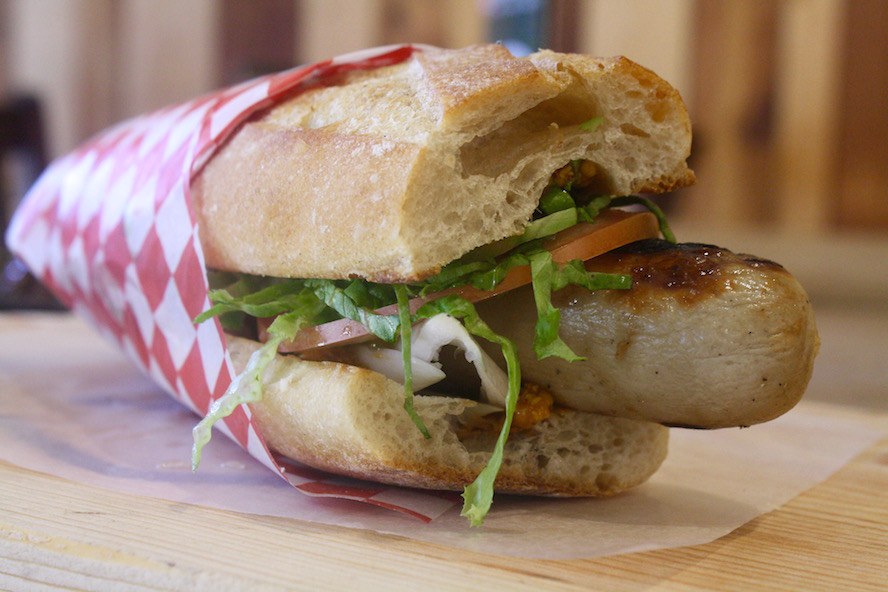 So what is the result of running a restaurant with product from local purveyors? Wholesome food made from scratch, with all certified organic ingredients – not to mention it’s plated beautifully, which never hurts either.

The menu at p2p is small but mighty. It includes a few vegetarian items – the Portobello Burger with Emmental cheese and a side dish of fermented seasonal vegetables. The rest of the offerings are about as meat-centric as it gets, and customers can choose how they’d like it cooked at the time of their order.

The Sowsalito Bratwurst is one heck of a creation. It’s big, so the $13 price tag is arguably worth it, and it can easily be separated into two servings. It’s an all pork Switzer in a natural casing, on a baguette from A Bread Affair (where all buns in p2p come from).

That’s not the only dog on the menu, there’s a Ranch Dog and the Chili Dog (beef and chili) up for order too. 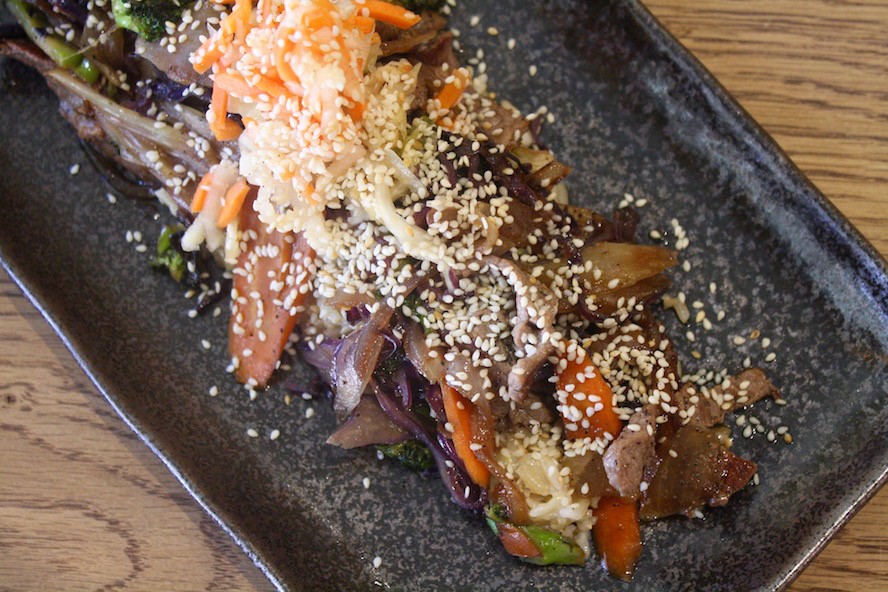 The Chilancoh Stir Fry is an example of a dish on the lighter side, yet it can still easily be split between two people. Beef stir fried with veggies on steamed rice is topped with a housemade teriyaki sauce.

This dish pairs well with a 8oz cup of one of p2p’s bone broths, which comes in veggie-infused beef, pork, or poultry both varieties. 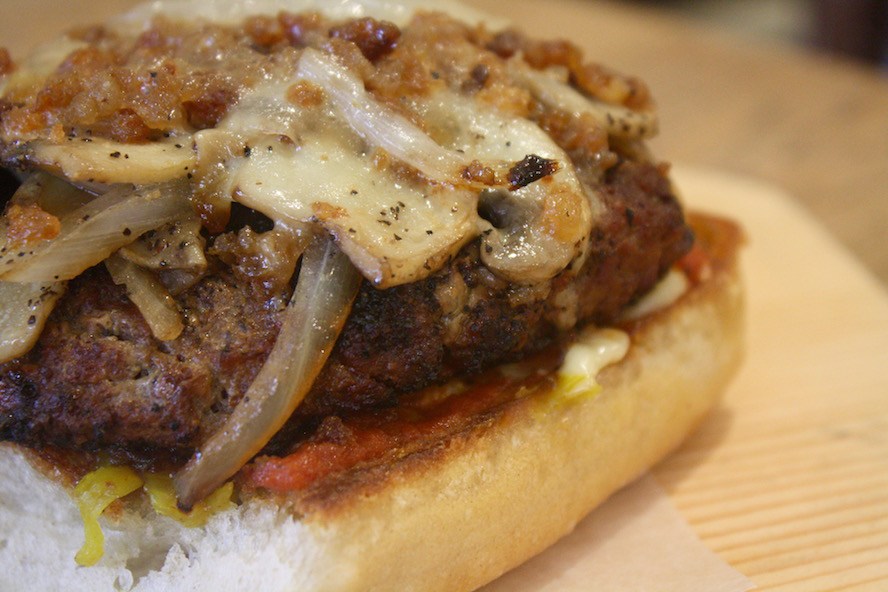 If you’re going to devour only one thing at p2p (it may be a difficult decision) – make it the KiNiKiNiK Burger: a half-pound beef patty topped with mushroom, Emmental cheese and bacon cracklings served on a fresh bun.

This is the mother of all burgers, and it’s incredibly filling – like don’t-eat-for-12-hours filling. The taste of the beef is stellar, and the tender meat is flavoured and topped to perfection and served with a side of kimchi.

It may come as a surprise, but there’s no fries necessary for this bad boy, it’s a meal on its own. 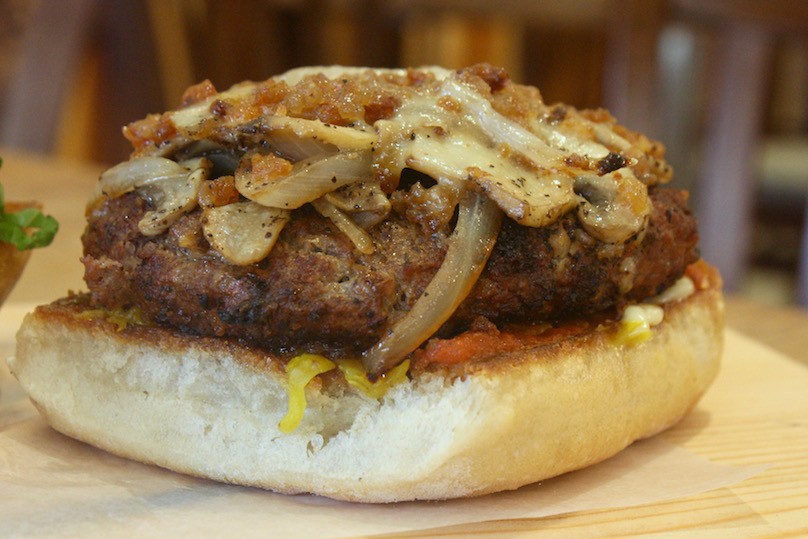 Aside from these offerings, p2p has a handful of other sandwiches, along with some deli items including Wild Craft Mustard, pepperoni sticks, sauces, soups, Bavarian meatloaf, and kombucha made and canned by Ethical Kitchen in North Vancouver.

For sweet stuff, this spot has some bakery items from Ethical Kitchen as well, including cookies, gluten free coconut macarons, and lemon poppy seed loaf. 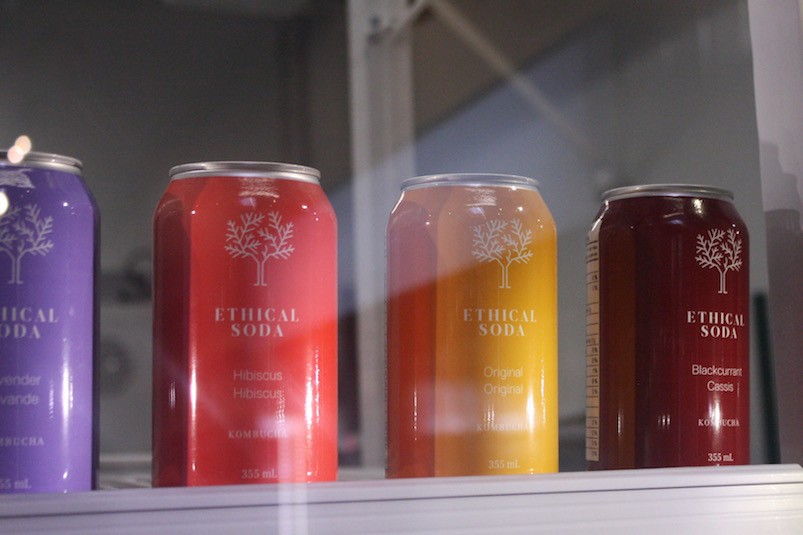 p2p plans on putting out a handful of tables in front of the restaurant so you can soon eat your next-level burger outside if you wish, which is ideal.