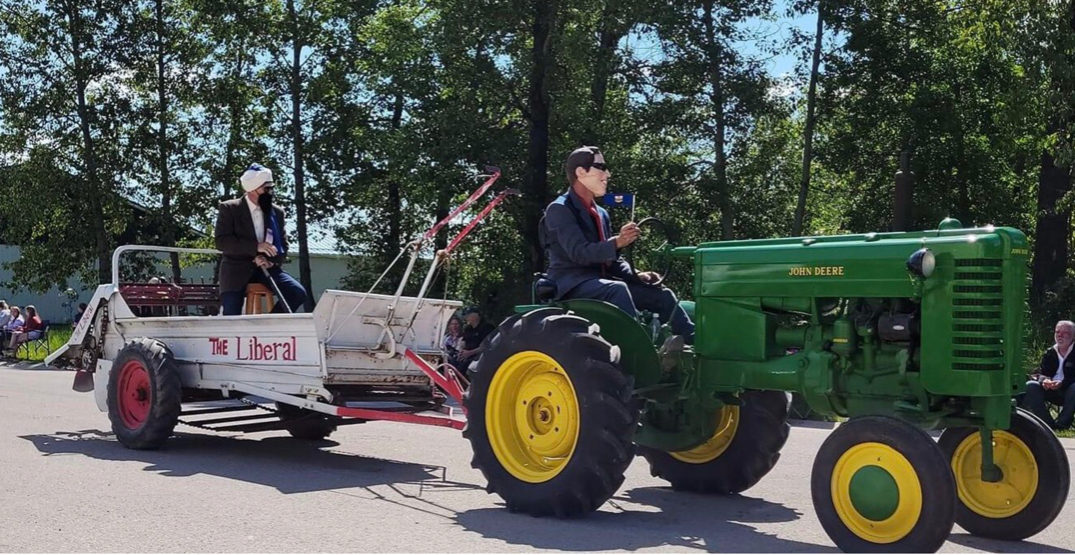 A parade float that appeared in a southern Alberta rodeo over the weekend has come under heavy criticism after it depicted a man with a fake beard and turban riding in a manure spreader with the words “The Liberal” pasted on its side.

Photos of the float, taken Saturday at the Sundre Pro Rodeo, show a man wearing a mask driving the tractor that’s pulling the manure spreader.

In a statement posted on the parade organizers’ Facebook page, officials said they were not aware that this float was going to be in the parade.

The committee added that it is committed to making sure future entries are reviewed and this doesn’t happen again.

One of the entrants at the Sundre Pro Rodeo parade, this morning. Yikes! 😬 pic.twitter.com/g7IdkpWIuq

Some people who commented on the apology questioned the accusation of racism, pointing out that the man in the turban and beard, who was not in blackface, was meant to depict federal NDP Leader Jagmeet Singh.

The float has been condemned by a Sikh group and political leaders across the spectrum, including Jason Nixon, Alberta finance minister and MLA for Rimbey-Rocky Mountain House-Sundre, and Jasraj Hallan, member of parliament for Calgary Forest Lawn.

This is absolutely disgusting. These kinds of acts have no place in Canada. This should be condemned in strongest terms by all. https://t.co/y9OZNcXbYI

I strongly condemn the racist float that appeared in the Sundre parade. Discrimination has no place in Sundre or anywhere in AB. I have been assured by parade organizers this float was not approved, & that they are putting measures in place so this does not happen in the future.

This is racist and inappropriate. There’s no place for this in our society. #ableg #abpoli https://t.co/4dhPpVhjkF

The Sikh community in Canada, of which I am a proud member, has a wide diversity of political perspectives.

More importantly, Sikhs have been a steadfast force for good in Alberta and across the country.

Shame on those responsible for this despicable display of racism. https://t.co/WMYa46IIN0

Extremely Disappointed and Saddened to witness this horrendous display of Racism towards the Sikh Community. We need to have serious conversations and actions to stop these forms of racism. We welcome @SundreProRodeo and their parade committee to visit DCC and learn about Sikhs pic.twitter.com/gv2k136g8m