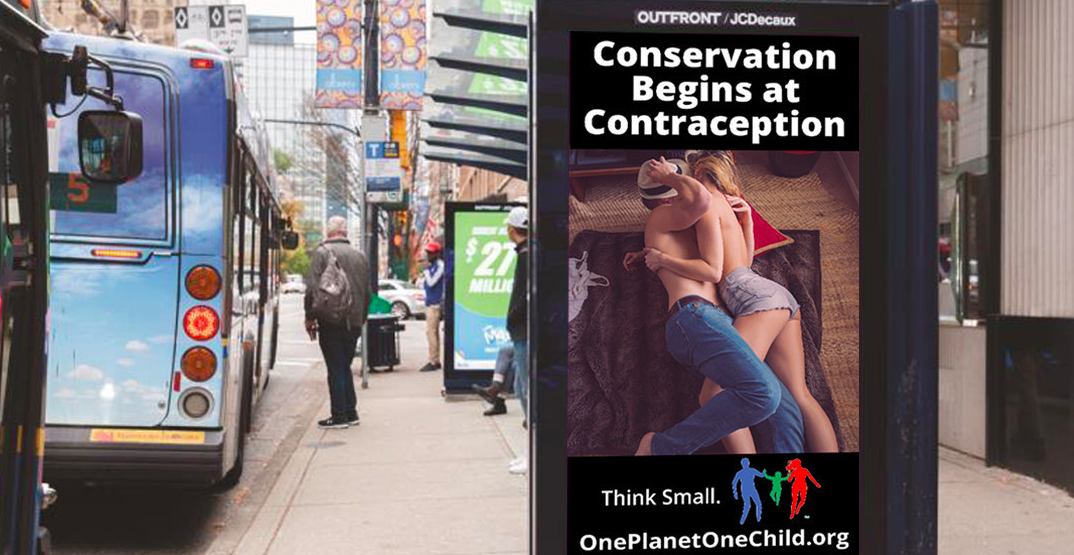 One of the billboards in Vancouver (World Population Balance)

A new billboard campaign has launched in Vancouver by a group that states its mandate is to “and educate that overpopulation is a root cause of resource depletion, species extinction, poverty, and climate change.”

The One Planet, One Child ad campaign comes courtesy of the World Population Balance (WPB) group, which states its mandate is to “alert and educate that overpopulation is a root cause of resource depletion, species extinction, poverty, and climate change.”

The idea behind this campaign is “to hasten progress toward a small family norm, leading to a sustainable world population.”

Billboards and transit stop ads in high-traffic areas feature a variety of sustainable population messages. Some include happy families with the headline, “We Chose One!” or “We Chose Childfree!” Other ads proclaim:

We want to get Canada talking about overpopulation,” said WPB Executive Director Dave Gardner, in a release. “A surprising number of journalists, elected officials, and the public are unaware the world is overpopulated or uncomfortable talking about it.’

Many people, he continued, “don’t realize the solution to overpopulation – and much of the environmental destruction it causes – is simply to embrace the accelerating trend toward freely chosen smaller families.”

Noting that birth rates are less than half what they were sixty years ago, and more women and couples today are choosing to delay or skip parenthood, WPB said this campaign “celebrates and supports these informed, considered decisions.”

WPB admitted that posting overpopulation billboards “is a bold move because the topic is frequently avoided – considered controversial by some, and subject to misassumptions.”

However, these factors are “why this campaign is needed – to debunk myths and correct misassumptions,”  said Gardner.  “This is a positive campaign. It encourages couples around the world to make their own informed and considered decisions about family size.”

Gardener stressed that WPB is not “dictating anyone’s choice,” but rather, “we’re celebrating and thanking people for small-family decisions.”