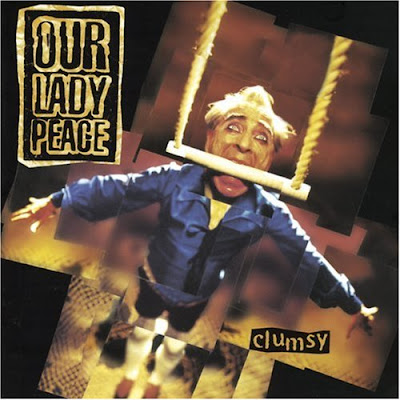 You’d be hard pressed to find me ever buying tickets to an Our Lady Peace gig these days, maybe there was a time during the old school festival season like Summersault or Edgefest where Our Lady Peace were prime real estate in the music business and every 5 minutes one of their songs would pop on the radio. These days it’s hard to tell the difference between any of the newest OLP records but when they announced they were “recreating” their 1997 smash “Clumsy”… well I was definitely on board with that.
The Vogue theater was the setting and while you waited in line to get a brew before the show you could see the set times listed, first the “Clumsy” set then a small intermission and a second set to follow which would be OLP playing through some of their hits, this was good news as we didn’t have to suffer through any opening act…god only knows what kind of band OLP would get to open for them (maybe Stereos? I’d rather rip my ears off). About quarter after 8 a video featuring a man who looked a lot like Saul Fox the man pictured on the first few Our Lady Peace records sketched out on a giant screen behind the stage and in between being slightly terrified of the video and pumped up to hear the opening riff of Superman’s Dead the 4 current members of Our Lady Peace made their way on stage and it was on.
Raine’s high octave voice was spot on and though he looked to be semi un-interested with what was he was playing, he sounded as good as he did 13 years ago. I say this because during more than a few songs where as a young kid growing up and playing the songs in my room alone on Saturdays would have me jumping off the walls and Raine just kind of stood there, looking bored. Explaining a bit about the songs as they went through the album was a nice touch as many of us 20-somethings in the audience had listened to Clumsy enough times to kill an entire seniors home. The obvious high points of the first set were 4am and the title track Clumsy where the crowd rose to their feet and like a choir in church we were all one, even the drunkest chicks who were almost falling over while swaying back and forth. The boys in Our Lady Peace played the Clumsy album basically perfect, not much change from the actual studio album but no one was complaining, maybe just annoyed at the sub-par amateur videos behind the band which looked as exciting as the screen saver on your PC.
On to the second set the video screen was gone and we were treated with a selection of all the Our Lady Peace hits over the years including One Man Army, Somewhere Out There & the best part of the night, the final song Starseed the only song from the band’s first album “Naveed”. Raine Maida looked a lot more comfortable or at least interested in this set, encouraging the crowd to get out of their assigned seats and come up to the front because this was a “fucking rock show”. I must say for never seeing Our Lady Peace in all my years I was obviously missing out on something because the songs I’d heard over the years from radio and TV sounded awesome live and the crowd loved it, it was a party in the Vogue. The only beef I really have besides how ridiculous Maida looked in his hipster scarf was the exclusion of the song Naveed, which would’ve took the show to the next level.

I definitely think Our Lady Peace is well past their prime when it comes to new music but the chance to see Clumsy from start to finish was too much to pass up and it was worth the price of admission.

With that being said I am glad to see more and more bands going back to classic albums and performing them in their entirety – Roger Waters The Wall in December and Our Lady Peace recreating Clumsy as just a couple examples – I’m wondering what bands Vancity Buzz readers would like to see recreate an album? Leave a comment with yours!

Some of my wishes: