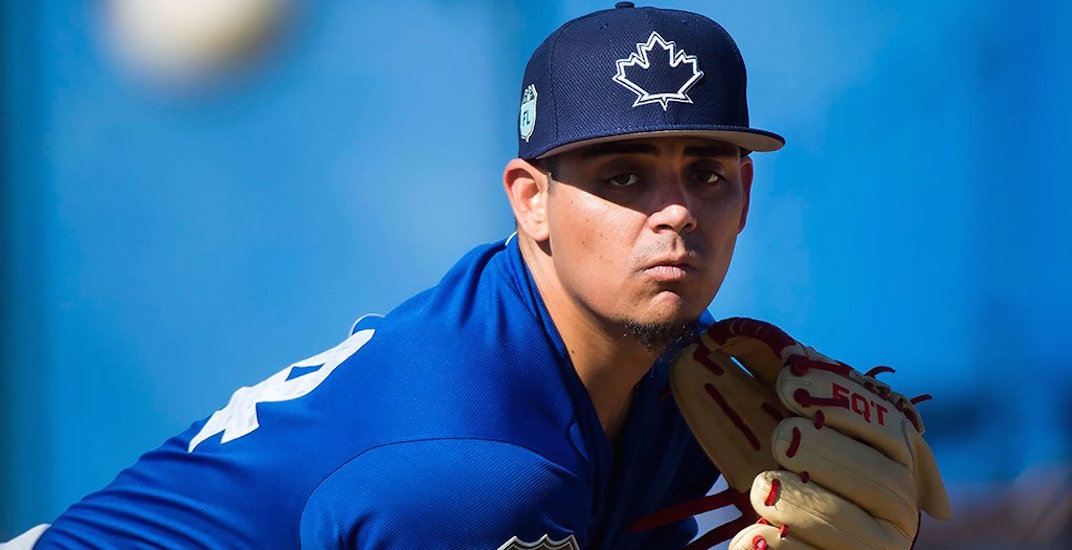 When news broke of Toronto Blue Jays closer Roberto Osuna’s arrest for assault, it sent shockwaves across Canada, to even the most casual baseball fan. Osuna was quickly placed on administrative leave, allowing the league seven days to investigate and provide a response.

The Blue Jays responded by releasing a carefully-worded statement.

Statement from the Toronto Blue Jays regarding Roberto Osuna. pic.twitter.com/ZnPOCjDSoR

A planned Osuna t-shirt giveaway scheduled for Thursday was replaced with one featuring Yangervis Solarte.

And almost as immediately, there came calls from fans not to ‘rush to judgement,’ to remember that people are ‘innocent until proven guilty’ and not to make any assumptions until we know all the facts.

Osuna has been with the team since he was barely out of his teens. He endeared himself with his ‘knock-knock’ and dance celebrations with his catcher after earning a save. And with his soft-spoken manner, mouth full of braces, and admission that he struggles with anxiety; many fans felt they were watching a brave young man mature in front of them.

The instinct to preserve this image is understandable.

Moreover, Osuna is an All-Star calibre player. He’s the youngest closer in history to reach 100 saves. He was an integral part of the team’s historic Game 5 win in the 2015 ALDS. For over three seasons, the 23-year-old has been the man reliably called upon to close down games and secure the W.

So, the player we thought we knew *seems* completely incongruent with a man capable of assault.

Fandom itself is a kind of tribalism – we speak of ‘our team’; what ‘we’ need to do to compete, players as ‘our guys.’ Being a fan provides a sense of community. See someone in another city sporting the gear of your favourite team and there’s an immediate bond.

Baseball by its very nature creates this kind of kinship. The season is the longest in North American sports, the games themselves are long. And now social media has given us new (albeit carefully curated) access into players’s lives that really make us feel like we ‘know them’.

But we don’t. And just because a player is ‘our guy’ doesn’t mean he’s a ‘good guy.’

In fact, baseball has long had a problem with toxic masculinity. To many, there is a huge disparity between the punishment for PED use and committing domestic assault.

Taking performance-enhancing drugs results in an automatic punishment of 80 games for the first offence, a full season for a second, and a lifetime ban from baseball if there’s a third. Players are also barred from participating in the postseason the year of their suspension.

Arrests for domestic assault are dealt with on a case-by-case basis, under a revised domestic violence policy. Atlanta Braves outfielder Hector Olivera is so far the only player to receive an 82-game suspension under this new policy- the longest MLB has handed down. Other suspensions, including Yankees reliever Aroldis Chapman (30 games), former Jays shortstop Jose Reyes (51 games), and Boston pitcher Steven Wright (15 games) have been far less severe.

The message to female fans has been pretty clear. Major League Baseball doesn’t consider your assault as egregious as finding a metabolite of a PED in a player’s system. Women are in effect told – over and over – that our safety isn’t valued as much as a player’s ability to hit and throw a ball. The league has the option to suspend for as long as it sees fit – regardless of whether the charge results in a conviction.

How MLB and the Blue Jays respond to Osuna’s arrest as both a valuable player and (up until now) fan favourite, will have long-lasting implications for its female fanbase. This is the opportunity to provide a clear and unequivocal message that no one player is bigger than one woman – than all women.

This is bigger than baseball. Fail again and risk losing a significant portion of fans. I know I would stop watching.