As a screen with a projected, painted image of a red sun descending into stormy waters lifts to reveal the stage, the Queen Elizabeth Theatre transforms. The curtains bloom with cherry blossoms, slipping later into starry night skies and pink dawns; the set — a simple room divided by a number of screen doors — places the audience in a marital home on a hilltop in Nagasaki, Japan. Together, the construct and the projections form a delicate frame around Puccini’s tearjerker, Madama Butterfly, and accentuate a breathtaking production by the Vancouver Opera.

Both cultural and sexual imperialism are at the heart of Madama Butterfly, which sees an abandoned young geisha waiting in vain for the return of her American husband. Director Michael Cavanagh seamlessly exposes the intellectual intricacies of the opera’s rich tapestry, shining light on cultural clash, the pressures of tradition, and the dynamics between faith and delusion, hope and truth. His addition of surrounding white panels to the house, which provide the backdrop to the aforementioned projections, provide a platform for a deeper understanding of Butterfly’s struggle as they shift with the emotional tides of the story.

Though Madama Butterfly, in total, is a two-hour and 45-minute production, soprano Mihoko Kinoshita’s captivating portrayal of Cio-Cio-San (Butterfly) makes you doubt the clock. Kinoshita, who will perform the role on alternate nights during the opera’s run, first grasps attention with her entrance as her voice rises from the female chorus. She is brimming with hope, her tone gorgeous and rosy. Her delivery of the aria “One Fine Day” marking the commencement of Butterfly’s arduous waiting period for her new husband, Lieutenant Pinkerton, is achingly beautiful and soaked with emotion. 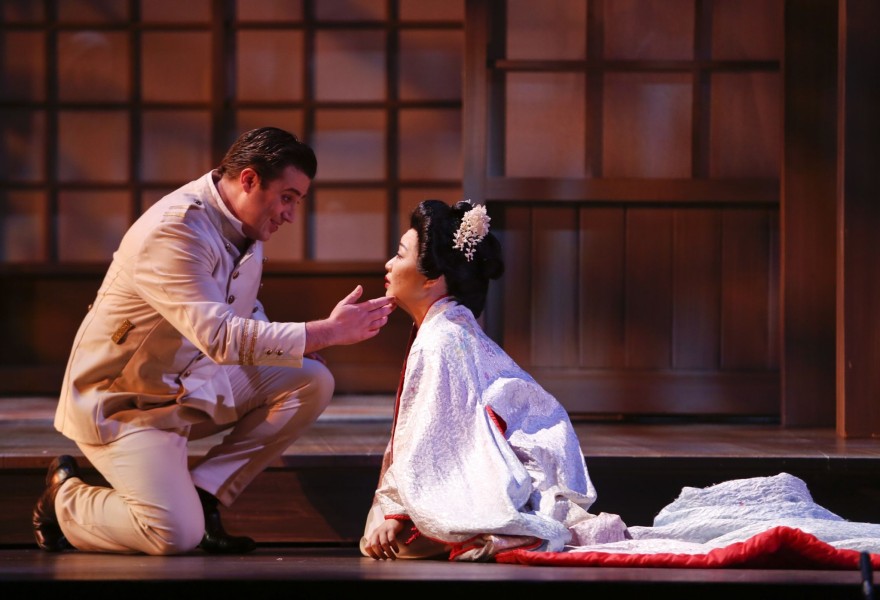 The second act fast-forwards the timeline three years and Kinoshita is visibly transformed from fluttering and besotted to weathered and drained. Financially broke, Butterfly has been disowned by her relatives for renouncing her own religion in favour of her husband’s. Nevertheless, despite all advises from her maid, Suzuki (poignantly portrayed by Allyson McHardy), she holds firmly onto her faith of love.

The tragic nature of the story is amplified by the orchestra’s magnificent accompaniment. Led by conductor Leslie Dala, the ensemble moves from luscious to fragile while intensifying on the monumental climaxes. Amongst the most striking is “The Humming Chorus” and the heartbreaking interlude that partners Butterfly’s nightlong vigil as she waits for Pinkerton once he’s finally made his return to the port. 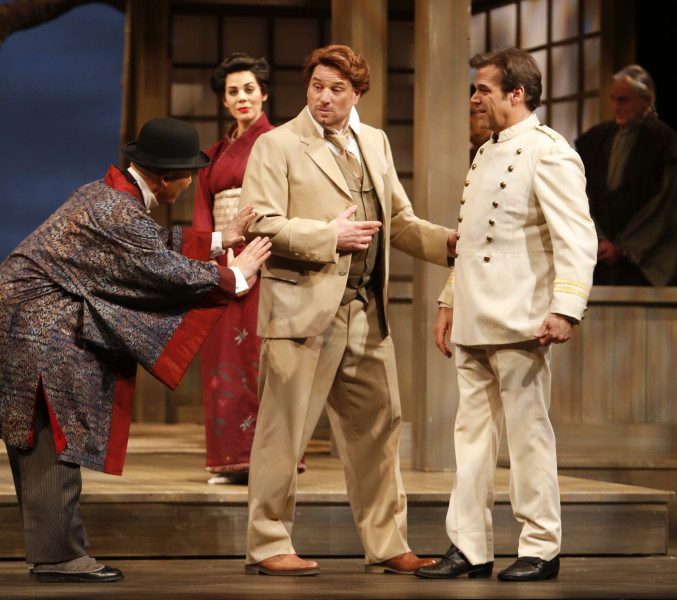 Gregory Dahl’s rich baritone gives the sympathetic Sharpless a booming quality, which contrasts well with the tenor of the impertinent Pinkerton, portrayed here and also on select nights by Richard Troxell (and so persuasively that he received teasing boos from the audience at the bow). One must also mention the adorable Clara Griesdale, who plays Butterfly’s son, Sorrow, and nearly steals every scene she was in.

The night, however, belongs to Kinoshita —  her transition from ebullient joy to violent dejection exquisitely illustrates just why Madama Butterfly remains to be one of the most unforgettable operas of all time.