The much loved Vancouver Whitecaps FC captain Jay Demerit has announced his retirement from professional soccer in an open letter posted on the Whitecaps FC website. A press release will happen today at 1:30 p.m.

Demerit, 34, was the first player signed by the club before their entry into the MLS in 2010 and was named team captain before the season started. Over the past few years, the centre back had a string of injuries beginning with a concussion during the 2012 season. 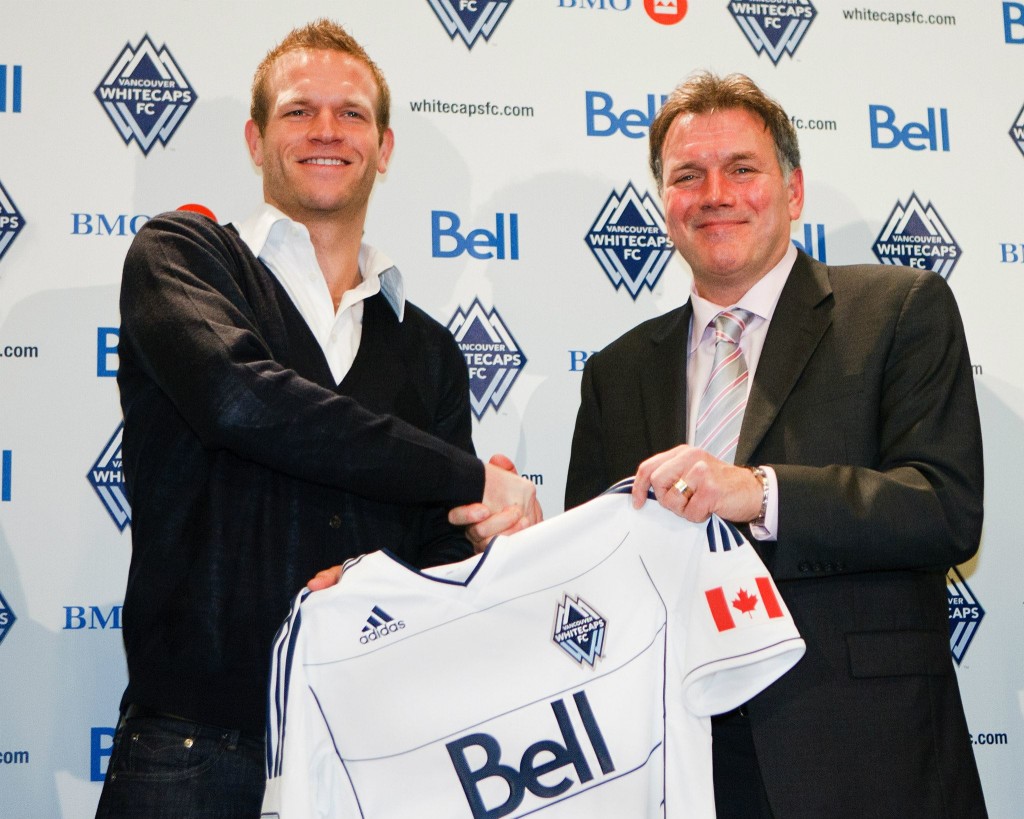 Prior to playing for the Whitecaps, Demerit played for Watford FC at Hertfordshire, England and also competed for Team USA at the 2010 FIFA World Cup in South Africa.

Demerit has been the heart of the Whitecaps and a popular figure around Vancouver, and will definitely be missed.

Today, I announce the end of my career as a professional soccer player.

Eleven years ago, I can remember feeling excited about what might be next.

After years playing the game I love as an amateur, first for the Howard Hurricanes in my hometown of Green Bay, Wisconsin and then at the University of Illinois-Chicago, professional soccer scouts had passed on me. I sat at O’Hare Airport in Chicago with about $1200, a full backpack that my parents had just bought me as a present for graduating from college, and a plane ticket to London.

I think about those first years in England, sleeping in the attic of my friend Kieron’s house in London, broke, sharing bath water, and all alone trying to find a wall to kick my soccer ball against in my neighbourhood so I could work on my touch and footwork. I remember playing games in the middle of the winter, muddy, with nothing but a couple of cows and five people in the stands.

I think about the struggle to make it, the ability to always stay positive, and how eventually all of those experiences would make me so much stronger as a player, and most definitely as a person.

Then it all started to change.

I’m enormously proud to have played a total of 284 games for only two clubs – and I got to be the first American captain of both of them for a combined seven seasons.

I got to play in the English Championship, the Premier League, and got to return to North America and experience the continued growth of professional soccer here in Major League Soccer.

I’ve had the privilege of wearing the Red, White, and Blue of the U.S. Men’s National Team for five years, in 26 games. I got to be part of the group that snapped Spain’s win streak in 2009, before playing in the USMNT’s first-ever world tournament final against Brazil in the Confederations Cup. At the 2010 World Cup in South Africa, I got to stand on the halfway line with my hand on my heart, singing my national anthem as one of 11 starters chosen to represent my country against England, Slovenia, Algeria and Ghana.

I got to travel around the world, grace a few magazines and billboards, and got to see the soccer community come together and raise money to make a movie about my life. I got to talk about my beloved Green Bay Packers with Elton John while in my underwear and drink beers with Bill Clinton. I got to meet other amazing athletes and even got to marry the most beautiful Olympic gold medallist on the planet.

After the World Cup in 2010 I was a free agent, and Whitecaps FC were the team that fought hardest for me and the team that wanted me to play the role that I hoped my experience in this game could handle.

The first few seasons since I have been in Vancouver have not always been easy, but being the first signing of an expansion franchise, I’ve always known what I signed up for. I knew this city was something special the moment I laid eyes on it and I am proud to now call this my home. The foundation we have now built together with the club, its staff, and most importantly with its supporters is something that still excites me for the future. I look forward to continuing what we have started, but now just with a different role.

Six weeks ago, I ruptured a second tendon in my ankle in a 15-month timespan – and things aren’t looking good. Last year, I battled back from an achilles rupture in fewer than six months, proving doubters and naysayers wrong once again, like I have time and time again from the moment I stepped on that plane 11 years ago. But this new injury is proving to be too much to come back from.

Even if I was to get back to a level where I could potentially play again, I would be putting at risk the reputation that I have spent so many years trying to create, and I won’t do that.  I’ve never taken the field just because I can. I’m either all in or all out. I take the field because I’m ready and able to give my all, to fight for my teammates, and give a committed performance for my club or my country.

I’ve always been the kind of player who wears his heart on his sleeve – and it’s that heart that is telling me it’s time to stop. If I can’t be the player that I have always been, and play to a standard that I believe is high enough, then it’s time for me to smile, say thank you, and give my commitment to a new cause.

I’m incredibly grateful to everyone who has helped my dreams become a reality over the past 11 years.

I want to thank my family for all of their support. I thank my friends for making me laugh and always keeping me humble. And I thank my wife, Ashleigh, for being by my side and for helping make this decision easier for me.

A huge thanks goes out to my extended soccer family. Watford FC gave me my first big chance and some very happy times, embracing an unknown American and making him feel at home. Whitecaps FC gave me a new opportunity and a challenge to help soccer grow in our city. I’m grateful to all the coaches and teammates along the journey who have helped me to be a better player, and a better teammate.

Most importantly, I want say a thank you to the fans of Watford, Whitecaps FC and the USMNT for always showing me the passion and commitment that I’ve always tried to show them.

I look forward to my new role as an ambassador for Vancouver Whitecaps FC and for the sport of soccer in general. The quest has always been to challenge myself, and people in general, to chase their dreams and achieve the impossible. Together with the club and some new adventures of my own, I am excited to continue to spread that message.

Eleven years on from that afternoon in the Chicago airport, I’m sitting on my balcony, watching the sun drop behind the mountains of Vancouver, British Columbia. The ocean water in the bay is calm and I’m at peace.

I can’t wait to see what’s next. 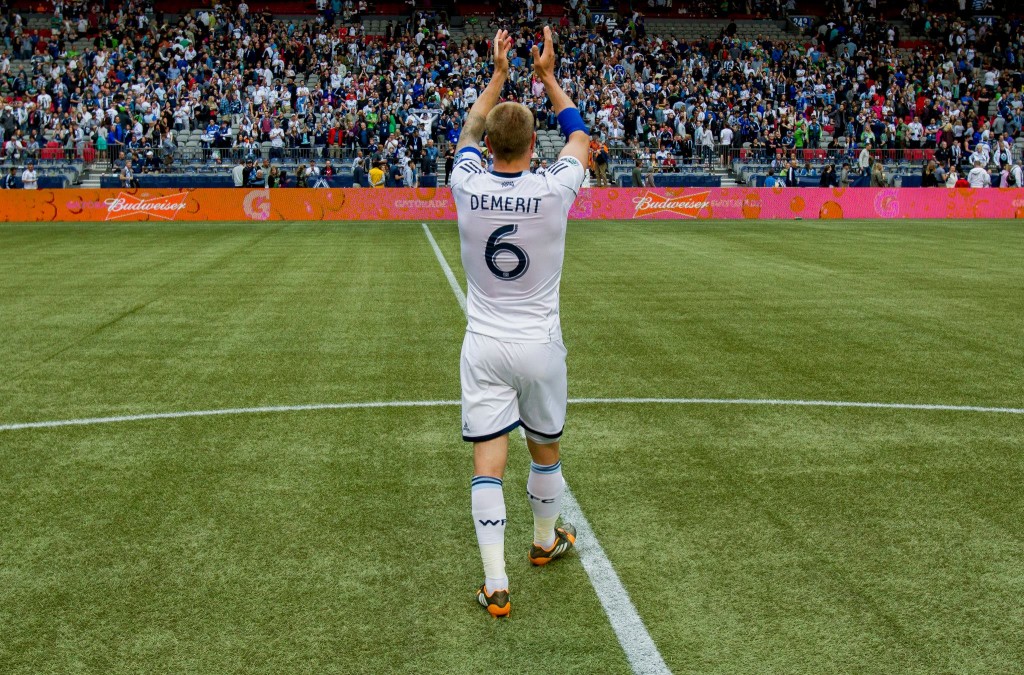